A Met policewoman who was filmed shouting ‘free Palestine’ and hugging protesters at a rally was today condemned by a senior police federation official who said he feared officers had lost their impartiality when they began taking the knee during Black Lives Matter protests last year.

The unnamed officer was also recorded endorsing the protest outside the Israeli embassy – shortly before it turned violent and her police colleagues came under attack.

Today Ken Marsh, chairman of the Metropolitan Police Federation said: ‘I don’t understand why she did it because it was definitely something she shouldn’t have done that’s for sure.

‘Police officers must remain impartial at all times. Don’t forget this happened at a rally where her police colleagues were later violently attacked.

‘I think the taking of the knee set a bit of a precedent. 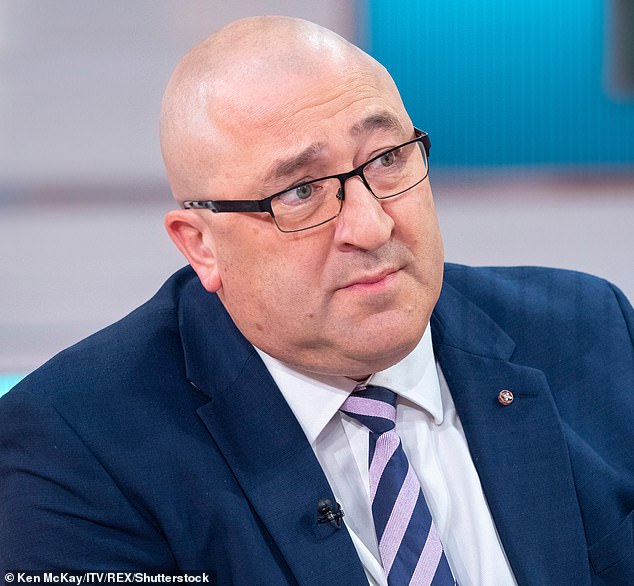 Today Ken Marsh, chairman of the Metropolitan Police Federation said he ‘did not understand why the officer did it’ 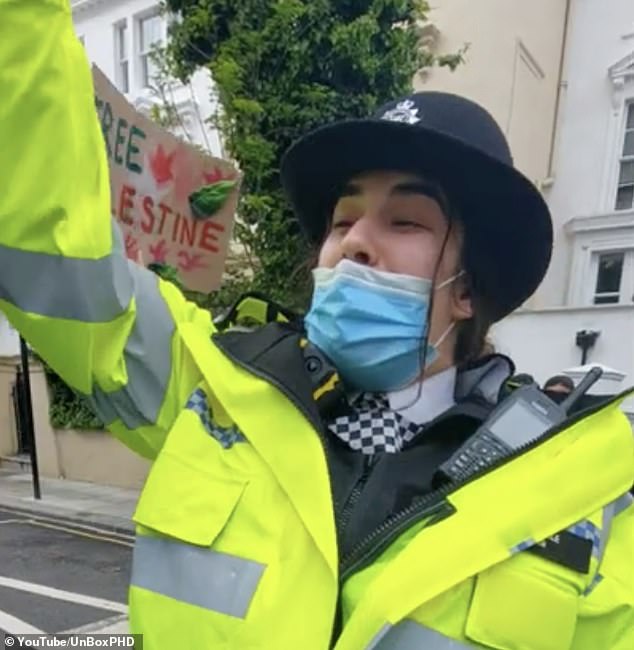 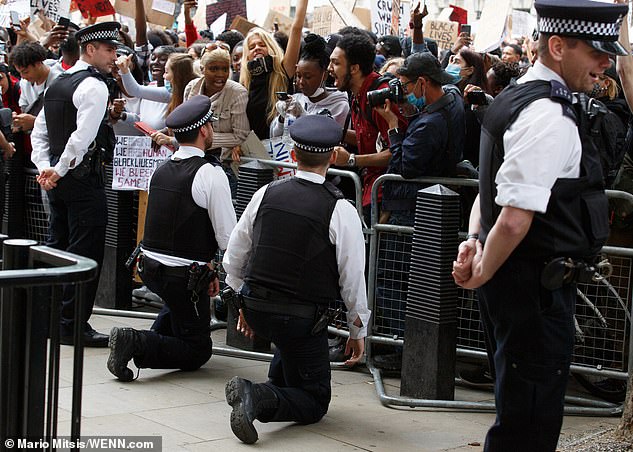 Metropolitan Police officers took the knee during the summer’s Black Lives Matter protest in London, after being given the green light to do so by bosses

‘This Covid period seems to have given officers the opportunity of expressing themselves in a way they shouldn’t while wearing the Queen’s uniform.

‘That brings with it certain responsibilities. We have to police without fear or favour’.

The row began when footage obtained by MailOnline showed the unnamed female officer at the demo at which thousands had protesters marched through central London to protest against Israel’s policy’s in Gaza before gathering outside the country’s embassy in Kensington.

The officer shouted ‘Free Palestine’ to cheers of support and was also seen clutching a white rose and raising her arm aloft in support of those gathered in the footage taken last Saturday. 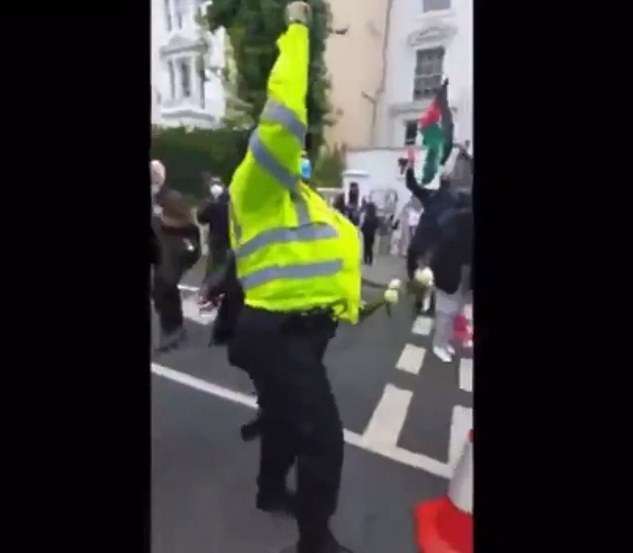 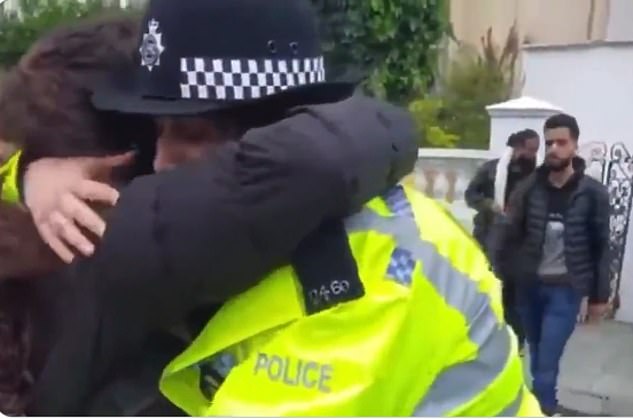 The officer hugged a woman who urged her to join the protest, where nine police officers were injured 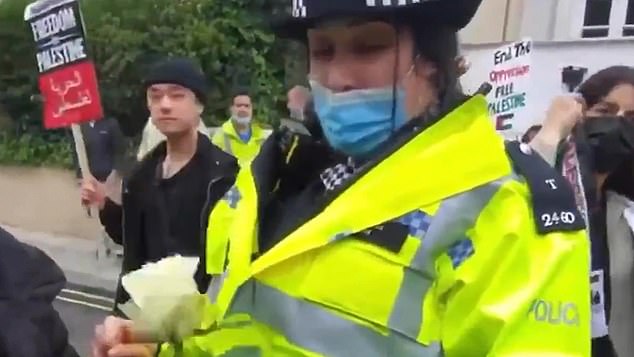 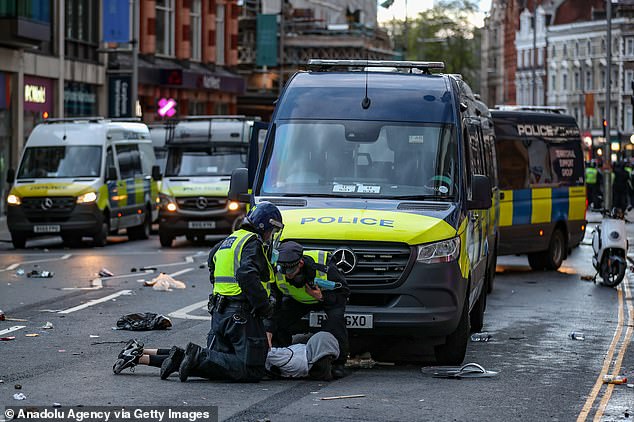 By Faith Ridler for MailOnline

A pro-Palestine protestor was struck by a hit-and-run driver and carried along on the bonnet before a mass of fellow demonstrators surrounded the victim.

Footage from Kensington, west London, captures the rally as it marches down the high street, with demonstrators clutching Palestinian flags over their shoulders.

But the peaceful protest is suddenly interrupted by a motorist who crashes into one of the group, carrying them up the road on their car bonnet as they attempt to flee. 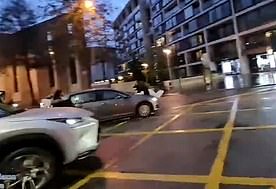 Footage from Kensington, west London, captures the rally as it marches down the high street, with demonstrators clutching Palestinian flags over their shoulders

The person clings to the car before eventually falling to the ground as those around frantically drop signs reading ‘End the Siege’ to rush to their aid.

A huge crowd is soon gathered around the protester, with people behind calling for an ambulance and shouting to others to ‘give him space.’

The driver failed to stop at the scene but the Metropolitan Police does not believe the collision at around 9pm on Saturday was deliberate.

A Scotland Yard spokesperson said: ‘Officers attended along with London Ambulance Service and found the pedestrians – a man and a woman – with minor injuries.

‘The woman was taken to hospital as a precaution.

‘The driver of the car failed to stop at the scene and enquiries to locate them are ongoing.

‘No arrests have been made.’

Thirteen people were later arrested after police were pelted with missiles and hit with wooden sticks outside the Israeli Embassy in Kensington.

Her behaviour is now the subject of an internal investigation and The Directorate of Professional Standards has been informed.

Mr Marsh said: ‘This case is a really difficult one for me because she is a member of the Federation and my role is to represent her but I cannot excuse her actions on this occasion’.

The Met Police Federation is a staff association that represents London police of all ranks in lieu of a union which they are not allowed.

In footage the policewoman is shown holding the hand of an activist having been handed a white rose, before hugging the woman on the street in Kensington, west London.

The officer appears to say she is ‘praying day and night’ to Allah, before embracing the woman despite Met rules saying ‘officers must remain independent and impartial in carrying out their duties’.

She then raises her arm in the air and repeatedly chants: ‘Free free Palestine, free free Palestine’, sparking cheers from the thousands of people walking to the protest at the Israeli embassy.

The clip sparked outrage on social media, especially amongst British Jews, and Scotland Yard is investigating after being bombarded with complaints on Twitter.

MailOnline has asked whether the officer has been suspended, but the Met declined to answer.

The incident came after Met officers were criticised for taking the knee during BLM protests in London in 2020, after bosses gave them the green light saying it was down to their ‘discretion’ to do so.

Some older officers were insistent that police shouldn’t kneel to protesters, who injured a total of 27 Met police officers last summer.

A Met Police spokesman said: ‘We are aware of a video that has been posted on social media which shows an officer joining in with chanting while on duty at a demonstration.

‘While officers are encouraged to positively engage with those attending demonstrations, they know they are not to actively participate or adopt political positions. This is vital to ensuring the public have confidence in our officers.

‘The Directorate of Professional Standards has been informed and are investigating the full circumstances of this incident and to determine what further action is appropriate’.

Meanwhile, the Met’s events unit, which is in charge of policing protests in London tweeted: ‘We police hundreds of events and protests every year and officers must remain independent and impartial in carrying out their duties.

‘We are aware of footage circulating from the weekend. We’re reviewing it and a further update will be released shortly’.

The incident has led to a slew of complaints to the Met via social media, with the force saying they are taking it seriously 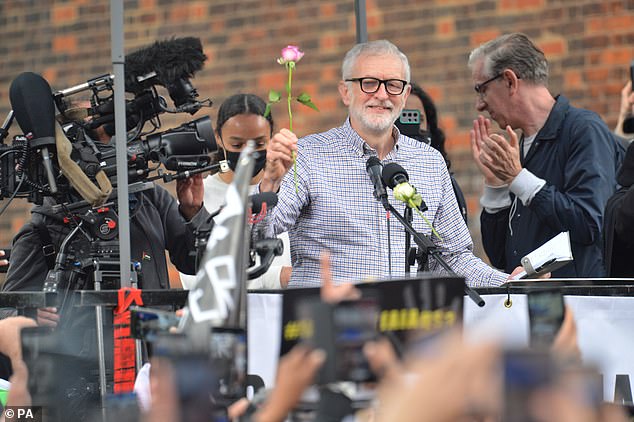 Former Labour leader Jeremy Corbyn (pictured) told the crowds international action provides ‘succour, comfort and support’ to those suffering in the conflict. Crowds chanted ‘oh, Jeremy Corbyn’ and threw roses as he took to the stage 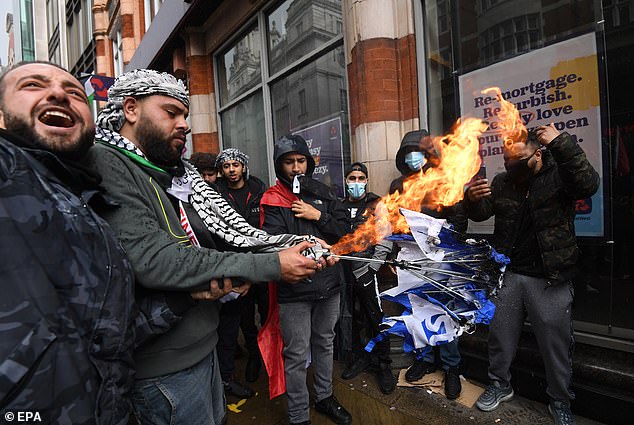 Pictured: Supporters of Palestine attend a demonstration outside the Israeli embassy in London, Britain, 15 May 2021 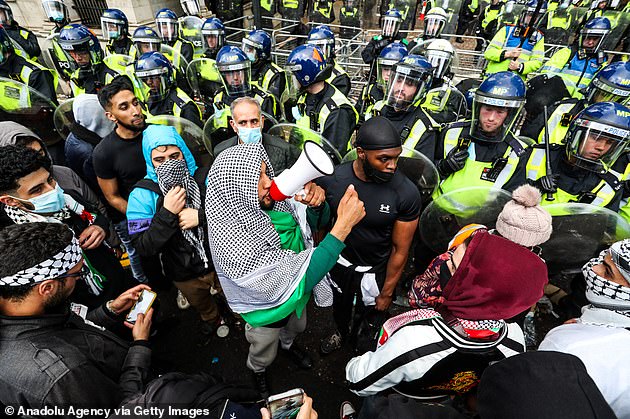 Police watch pro-Palestinian protesters outside the Israeli Embassy in London on Saturday.  There is no suggestion that those pictured were involved in the suspected race-hate incident 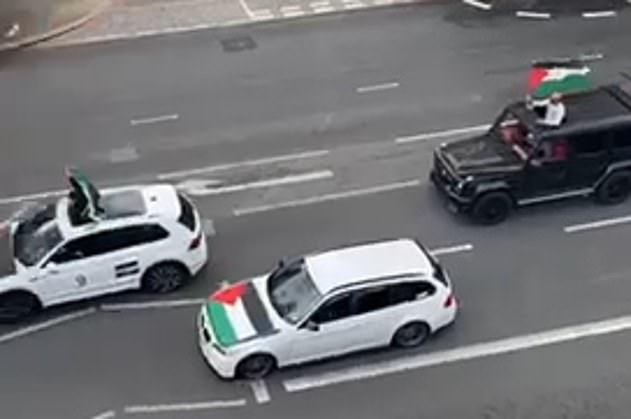 Thousands of people marched through the capital on Saturday to the gates of the embassy in Kensington, while protests took place in other cities across the UK and Ireland in solidarity with the people of Palestine.

Nine people were arrested on suspicion of violent disorder in London, the Metropolitan Police said.

A further four were arrested on suspicion of breaching the Health Protection Regulations, the force added.

The Met said small pockets of disorder had followed a largely peaceful demonstration.

Superintendent Jo Edwards, in charge of the policing operation, said: ‘We once again saw police come under fire from missiles and several were injured as a result of this. It is totally unacceptable and I wish those officers a speedy recovery.

‘Throughout the day, officers sought to engage with people who had gathered to demonstrate, and encourage them to disperse to help protect themselves and others during this public health crisis.

‘Where this approach did not work and officers were met with hostility, they took enforcement action.’

‘Shame on each of you’: China, Russia and US clash over pandemic responses