Members of the conservation group that supports All Saints Church in East Horndon – a Grade II-listed building – said they are ‘devastated’ by the damage caused and estimate repairs could cost more than £1,000.

Organisers of the event set up a bar and DJ decks inside the church and hired Portaloos for partygoers.

Officers had objects thrown at them and were threatened as they dealt with the incident at the disused church – which led to three people being arrested on suspicion of drugs and public order offences.

It came as police in Essex alone issued £18,000 worth of fines over New Year celebrations, breaking up events that included a house party with 100 people attending and a fire dancer performing for crowds. 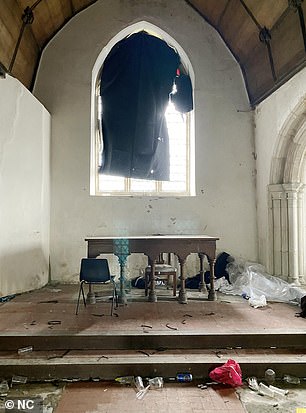 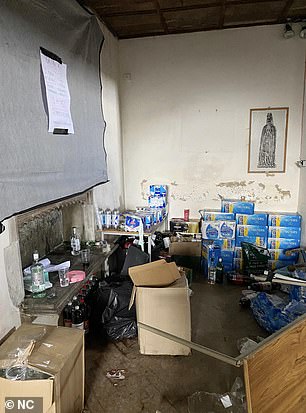 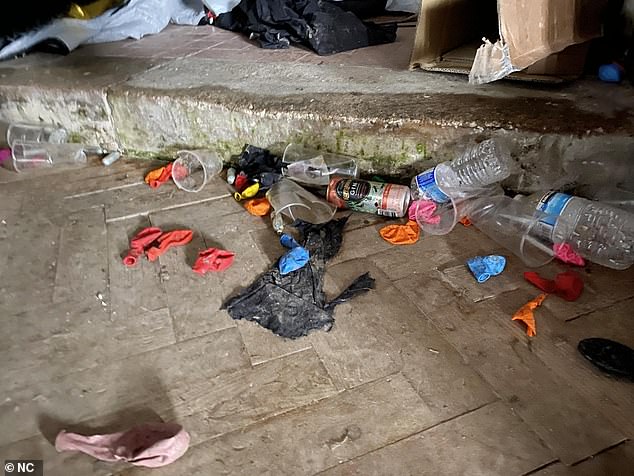 Members of the conservation group that supports All Saints Church in East Horndon – a Grade II-listed building – said they are ‘devastated’ by the damage caused (rubbish pictured in the church) and estimate repairs could cost more than £1,000

Another new year celebration which had to be shut down saw police break up a crowd that had gathered at an industrial building in Wates Way, Brentwood.

Two people were arrested on suspicion of drink-driving and for failing to provide details.

Officers are trying to track down the organisers of both events, and chief inspector Richard Melton said they would receive the maximum penalty for these ‘blatant breaches’ of coronavirus regulations.

Chief inspector Melton said: ‘It is the reckless minority of people who organise and attend unauthorised events of this kind that risk spreading Covid-19 and jeopardising the efforts of the majority of people who are doing the right thing. 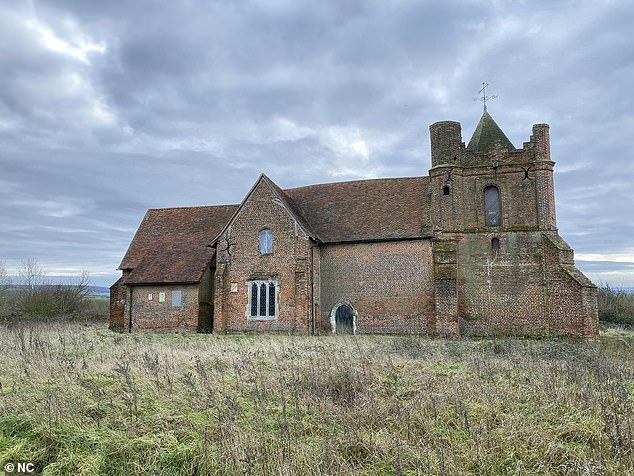 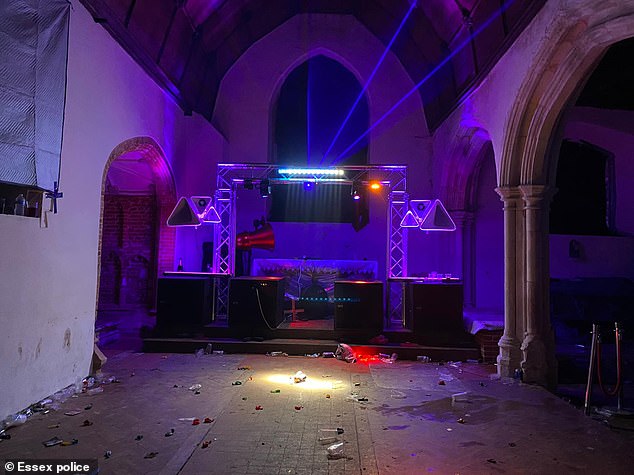 Assistant Chief Constable Andy Prophet criticised those who ‘decided to blatantly flout the coronavirus rules and regulations and, ultimately, they decided that partying was more important than protecting other people,’ after police in Essex broke up an illegal gathering at an abandoned church in Thorndon Park (pictured)

‘Tragically there are people dying or becoming seriously ill because of this awful virus and we all have a responsibility for doing all we can to protect each other.’

Arrests made at the church included a 27-year-old man from Harlow, on suspicion of possession with intent to supply Class A drugs and a public order offence.

He has been released under investigation while inquiries continue and was given a fixed penalty notice for breaching coronavirus regulations.

A 22-year-old man from Harlow was released without charge for an alleged public order offence and given a conditional caution for possession of cannabis.

He will be given a fixed penalty notice for breaching coronavirus regulations. A 35-year-old man from Southwark, who was arrested on suspicion of possession of drugs, was given a community resolution for possession of cannabis.

Police in Essex broke up house parties and raves, including one in an abandoned warehouse in Brentwood on Thursday night

Astrid Gillespie, a volunteer for the Friends of All Saints, said she was ‘just trying to get her head round the news’, having found out via a Facebook post on New Year’s Day.

‘I went up there and the police were still there packing up the equipment that they seized,’ she told the PA news agency.

‘There were hundreds of people there, it sounded like it was a ticketed event. It was a professional set-up, they’d hired Portaloos – they’re still there.

‘They had a bar area where you had to exchange tokens, so they must have been selling drinks tokens.

‘There was loads of evidence of drugs and they’ve done damage to the church, obviously it’s a mess and needs to be completely cleaned out.

‘The ground has been all churned up because they must have had vans dropping off all the equipment.’

A woman has been fined £10,000 for organising a house party – complete with a fire dancer as an entertainer – at her home in Sewardstonebury, Essex, on New Year’s Eve

Ms Gillespie, 48, said a small window had been smashed to put in an extractor fan unit and the sound equipment had been wired into the church’s fuse box.

She added that because of the building’s age and heritage status, the damage was ‘not going to be cheap’ to fix, and that the locks would have to be replaced.

‘The vicar is going to organise a preliminary clean-up but it’s a huge task and we’re estimating £1,000 but it could well be more,’ she said.

‘I love the place, it’s such a beautiful church, and to find out it’s been damaged is devastating, I’m just trying to get my head around it.

‘You wake up in the new year and think ‘new year, new me’ and then you’ve got to deal with all this.’ 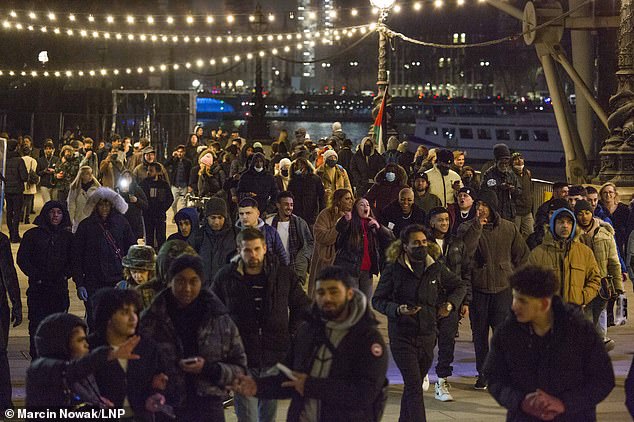 Despite strict orders to stay at home, crowds gathered along London’s Southbank to watch the fireworks display. While others attended a nearby protest against lockdown rules 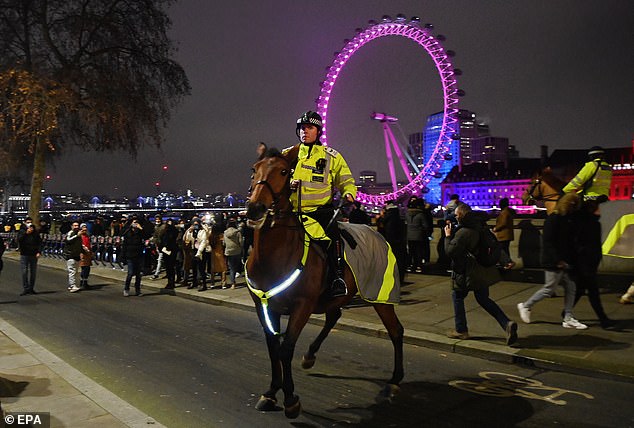 A woman who organised an event in Sewardstonebury involving a fire dancer and an entertainer was fined £10,000.

Assistant Chief Constable Andy Prophet criticised those who ‘decided to blatantly flout the coronavirus rules and regulations and, ultimately, they decided that partying was more important than protecting other people’.

He added: ‘We’ve seized their equipment, arrested five people, and issued a large number of fines to those who think this behaviour is acceptable.

‘We need you to keep yourselves, other people, and the NHS, safe. Thank you again to everyone who spent their New Year’s Eve in a responsible, legal, way. ‘Stay safe, Essex.’

Two men were stabbed and a woman hit around the head with a bottle as violence broke out when up to 70 people squared up to one another in Edgware Road, London, just minutes after midnight.

There were similar raves across the country, as Greater Manchester Police issued 105 fines, compared to 66 in Brighton and Hove. 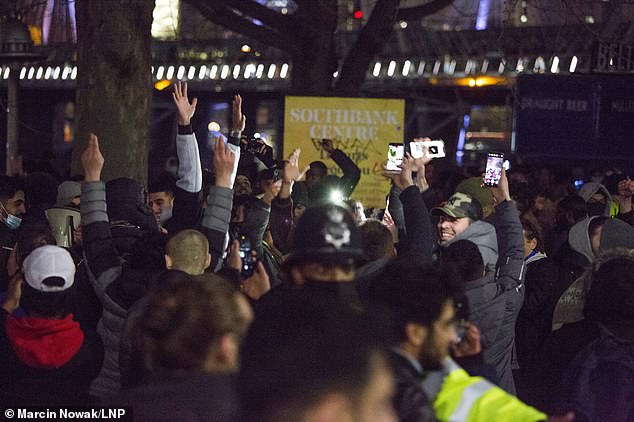 Despite police attempts to disperse crowds, revellers were seen laughing and joking as they ushered in the New Year

In the aftermath of the disturbances on Edgware Road, a photographer working for MailOnline was knocked unconscious while taking pictures near police officers yards from the homes of the rich and famous including Tony Blair and Claudia Winkleman.

As he recovered, he told MailOnline: ‘We got there and there were lots of armed police. Big armed police cars were zooming past us – we counted 11. There must be 100-and-something police there at least, a lot of them heavily armed.’

He said as he worked, a man approached him and punched him.

‘As I hit the floor, six or seven officers rushed to me and then apparently six or seven more caught the guy who did it,’ he said. ‘He was arrested on the scene.’

The experienced photojournalist said he counted around 60 or 70 suspected gang members present on the street after the initial stabbings had taken place.

Police said they were called by colleagues in the London Fire Brigade to reports of a stabbing on Edgware Road.

A spokesman said: ‘Officers attended the scene, with the London Ambulance Service and [the air ambulance]. Two males were identified with stab injuries. Both men were taken to hospital.

‘A woman was also located at the scene suffering with a head injury, she has been taken to hospital.’ He added: ‘One woman has been arrested for GBH and taken to a police station.’

Who is Oscar Pistorius and when will he be released from prison? – The Sun