Police have enlisted the State Emergency Service to help search the streets, parks and drains of Mernda, in Melbourne's north, for evidence after the death of Celeste Manno.

Friday's search, which lasted for several hours, focused on the area between the 23-year-old's house and a nearby police station. Ms Manno was home with her mother early on Monday morning when her alleged killer smashed her bedroom window, allegedly stabbed her and fled over a fence. 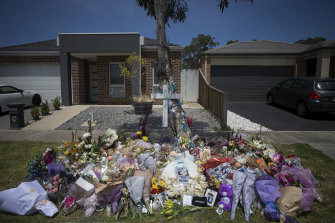 People have been laying flowers for Celeste Manno who was found dead at her home in Mernda.Credit:Paul Jeffers

Thirty-five year old Roxburgh Park man Luay Sako was arrested on Monday after driving himself to the Mernda police station. He was charged with one count of murder on Thursday following hand surgery.

A Victoria Police spokeswoman confirmed that officers searched the streets around Ms Manno's home but would not reveal the kind of evidence authorities were looking for.

"A 35-year-old Roxburgh Park man was last night charged with murder in relation to this matter," she said. "As it is now before the court, we will not be providing further detail."

It is believed officers were searching for personal items belonging to Mr Sako, such as a mobile phone. 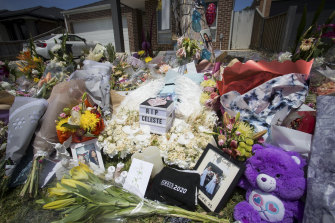 The operation comes as a makeshift shrine outside Ms Manno's home continues to grow, with dozens of people leaving floral tributes. Friends and family members have also left cards, candles, picture frames and even a Care Bear.

Earlier this week, Ms Manno's family paid tribute to the smart, beautiful and charismatic young woman. Older brother Jayden said she was "loved by everyone". Younger brother Alessandro added that his sister was his "everything".

"You and I were always inseparable and had a bond like no one could ever imagine," he said. "I can't believe you're gone and I'm never gonna see you again. You were so perfect in every way and I just can't believe this is real."

"To say she was beautiful would be an understatement," he said. "Celeste was graceful, elegant, charismatic, passionate and old fashioned – a one of a kind."

On Thursday evening the Melbourne Magistrates Court heard that it was Mr Sako's first time in custody. His lawyer Sam Norton said his client did not have any medical or mental health issues.

Mr Sako and Ms Manno were former colleagues. Ms Manno's family say Mr Sako became "obsessed" with her after she was kind to him on the day he was fired more than a year ago.

The family says Ms Manno went to police with concerns she was being stalked. It is believed an intervention order was in place at the time of her death.