A trucker was warned he could have killed someone after being caught by police with so much clutter and rubbish in his cab that he couldn’t see out his windscreen.

The shocking haul on the driver’s front seat included mountains of food, including a tub of meringue, coleslaw, Pringles, a pear and bottles of water.

A bucket and sponge, carrier bags and a fly swat could also be seen piled up. 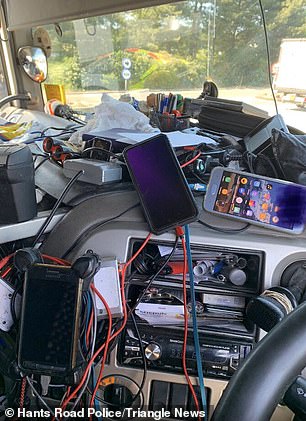 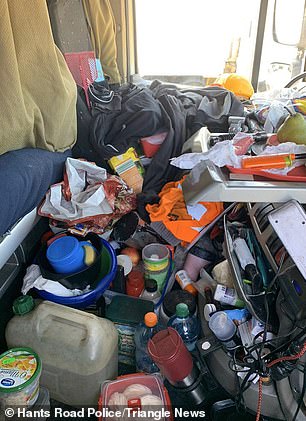 The shocking haul included mobile phones and wires scattered across the dashboard, pictured left, and mountains of food, including a tub of meringue, coleslaw, Pringles, a pear and bottles of water, pictured right

The dashboard was full of litter as well and he had wires crossing over the controls with three phones on charge.

The HGV driver was pulled over in Hampshire, as the force’s Roads Policing team tweeted: ‘Is this the disciplined and organised office of a top of his game professional lorry driver?

‘No. It’s a blocked field of critical view likely to hide and kill a pedestrian or cyclist.’

Other social media users also took to Twitter to react, with Guy Greenwood quipping: ‘Coleslaw, Pringles, meringue nests and a pear. That would make a nice spread at a BBQ.’ 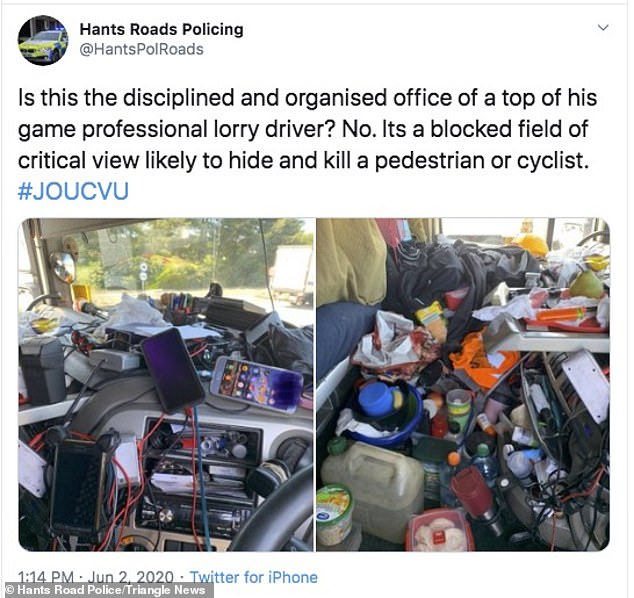 Others questioned what the driver’s home and bathroom must look like given his apparent attitude to hygiene and cleanliness.

Another user added: ‘Holy s**t, looks like one of those hoarding programmes on the telly.

‘But the hoard moves around at high speed with a half attentive driver. Illegal I hope?’

Hampshire Police was approached for more information on the driver.