The Victorian government hastily stood down private security in the state’s remodelled hotel quarantine program on Wednesday and sent in police to guard people infected with coronavirus after concerns were raised about poor infection control.

Staff employed by Spotless were pulled from the floor of the last remaining "hot" quarantine site – the Novotel in Southbank – mid-shift. The switch came after The Age alerted the government to a healthcare worker’s concerns that echoed failings of the first quarantine program overseen by the Health Department. 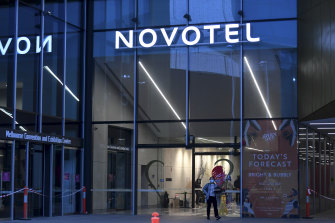 The quarantine hotels are now overseen by the Department of Justice, and Alfred Health has been contracted to provide clinical services. Alfred Health subcontracted the floor manager positions to Spotless.

Earlier on Wednesday, a healthcare worker involved in the revised quarantine program told The Age she feared the practices of Spotless staff could lead to further outbreaks that could trigger a third wave of the virus in Victoria.

“I can see it happening all over again,” said the health worker, who spoke on condition of anonymity out of fear she could lose her job. “When [international] flights start again, we (Victoria) will be screwed.”

The Age has confirmed that the COVID-19 Hotel Quarantine Inquiry, which finished public hearings on Friday, will investigate how those workers became infected. 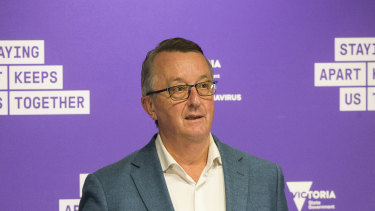 Newly appointed Health Minister Martin Foley said the program now sat under the Justice Department, which was in charge of staff acquisition, but “sophisticated, high level support”, including on infection-control protocols, was provided by Alfred and DHHS.

The Justice Department spokeswoman declined to say who was ultimately responsible for infection control, but said there was a clear structure of department managers that staff could raise concerns with.

“We have been strengthening infection-control practices, professional standards and oversight and we have a zero-tolerance approach to any breach,” she said.

“Government spokespeople suggest that the workers contracted the virus in the community and not at work in the hotels," he wrote. “However, no proof has been provided to support this assertion."

Mr O’Donohue said Alfred Health chief operating officer Simone Alexander had given evidence at the inquiry on infection control at the hotels.

“The evidence to the inquiry, that was essentially uncontested, is that infection control procedures Alfred Health had adopted at the ‘hot’ hotels were superior to those used throughout the hotel quarantine program for returned travellers,” he wrote.

“The suggestion that workers at the two hotels may have been infected from work contact is inconsistent with the evidence at the inquiry.”

The coronavirus spreads at least 13 feet, travels on shoes: CDC