Air pollution levels are double the acceptable rate on a truck-heavy corner where a childcare centre is set to be built in Melbourne’s inner-west.

The finding by the state’s environmental watchdog comes amid calls for planning rules to prohibit building childcare centres in polluted areas and a rethink of council policies pushing for centres to be built on arterial roads to avoid “cheesing off” residents in smaller streets.

Victoria’s Environment Protection Authority has revealed that average air pollution levels are double the acceptable rate on the corner of Williamstown Road and Francis Streets, Yarraville, where plans for a childcare centre have been approved. 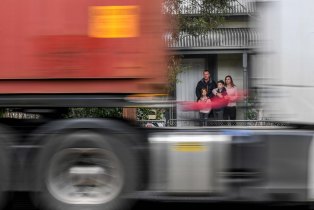 Kathleen and Rob with their children Matt, 11, and Georgia, 8, live on truck-heavy Williamstown Road in Seddon. They are sick of worsening truck traffic and pollution on their street. Credit:Joe Armao

The rooftop play area of the 170-place centre, which has not yet built, lies between container yards and the Port of Melbourne and would be just metres from streets where thousands of trucks pass daily.

The EPA has examined a year’s worth of air quality data captured on the corner where an apartment block is also located. It found air pollution levels breach the state’s standards on average once every 10 days.

The findings come as the Victorian government prepares to launch an inquiry on Monday into the health impacts of air pollution.

The EPA analysis of data collected on the Yarraville corner between May 2020 and April 2021 reveals the key pollutant is small airborne particles less than or equal to 2.5 metres in diameter (PM2.5). These particles are considered especially dangerous, as they can get deep into the lungs and bloodstream.

There is increasing evidence showing that traffic-related air pollution is linked to a higher risk of asthma, the onset of childhood asthma and reduced lung function in children.

Children are particularly vulnerable to traffic-pollution exposure because their lungs are still developing.

The watchdog’s analysis reveals air pollution levels breached the state’s standard on 39 days, which was likely driven by exhaust fumes from motor vehicles, the EPA found.

And the annual average of PM2.5 concentration measured was almost double the EPA’s standard.

“These poor air quality days are due to local urban air pollution and given the proximity to the road motor vehicle emissions are a likely major source of pollution,” the EPA said in its June report.

The EPA found these pollution levels were “substantially higher” than levels recorded in Footscray, where there were no days that exceeded the PM2.5 daily air quality standard.

Clare Walter, a researcher at Melbourne University’s Lung Health Research Centre, analysed the data. She found that children who would attend the childcare centre and be exposed to this level of pollution would face a 60 per cent increase risk in developing asthma.

Ms Walter led research in 2019 that mapped the locations of inner Melbourne’s 278 childcare centres and found more than 10 per cent of centres were located within just 60 metres from a busy road with daily traffic volumes of at least 20,000 cars a day.

“People have this perception that we are a low-pollution country but in urban areas, traffic-related air pollution is a significant issue,” she said.

Australia has one of the lowest-quality fuels in the OECD, yet is the only country in the OECD without a fuel efficiency standard.

There are no planning rules in Victoria that prohibit sensitive sites such as a childcare centres, schools or aged care facilities from being built in highly polluted areas.

This compares with California, where new schools cannot be built closer than 150 metres from a major road.

Ms Walter called on the state government to include air quality in planning approval decisions and penalise heavy polluters.

She also called for a rethink of council policies that tend to encourage childcare centres to be built on major roads to avoid “cheesing off” people who live in quiet residential streets.

The group’s president Martin Wurt said Australia’s trucks were among the world’s dirtiest.

“We urgently need a clean truck program, one with real targets and objectives to get these old polluting clunkers off our streets.

“If this was Europe or the USA these old trucks would not be allowed to operate. We need to drag our archaic truck fleet into line with best practice now – our health depends on it.“

A government spokeswoman said: “The government is working hard to address the complex issues around air quality in the inner west, by expanding air quality monitoring, building the West Gate Tunnel to take thousands of trucks off local roads, investing in shifting more containers from road to rail and establishing a low emission initiatives priority zone.”

Coronavirus symptoms – what is it and how is it spread? – The Sun