Legal papers finally delivered to the Duke of York’s Windsor home were not properly served, his team claimed over the weekend, meaning lawyers are considering not taking part in the pre-trial hearing.

Andrew is being sued by Jeffrey Epstein victim, Virginia Roberts, who claims she was sexually assaulted by the Duke. He vehemently denies the allegation.

But while the prince’s team are said to have signalled their intent not to participate in the telephone conference today, Judge Lewis Kaplan has ordered that both parties in the case ‘are directed to confer regarding an agreed scheduling order’, according to the Telegraph.

Judge Kaplan is looking to lay out a timetable for management of the case and if Andrew’s lawyers refuse to dial in for the hearing, it may be seen as being in defiance of his order.

It comes after legal papers were finally accepted by the security chief at Andrew’s Windsor home over the weekend after weeks of ‘avoiding’ officials, court documents dramatically revealed.

The clock is now ticking on the Duke of York, who has 21 days to respond or he will face a default judgment.

But Andrew’s lawyers claimed the papers were not properly served and hope to get the case thrown out on a technicality.

In a legal filing, his solicitor Gary Bloxsome said the document Miss Roberts signed in 2009 may make her action invalid. It is the first indication of how the prince and his lawyers intend to fight the case after weeks of silence.

On Friday, a new affidavit was also lodged in New York from a London-based ‘corporate investigator and process server’, Cesar Augusto Sepulveda, who was employed to personally serve Andrew with court papers relating to the US action.

He records how he first went to Royal Lodge, Andrew’s Windsor mansion, on August 12 and was met by Metropolitan Police officers guarding the gate who told him they ‘could not raise anyone in charge’.

They said they had been ‘instructed not to allow anyone attending there for the purpose of serving court process on the grounds of the property’. And they added that no documentation would be forwarded on, leaving the server with the strong impression they had been ‘primed’.

But Mr Sepulveda returned on August 27 and was told he could now leave his papers and they would be forwarded. 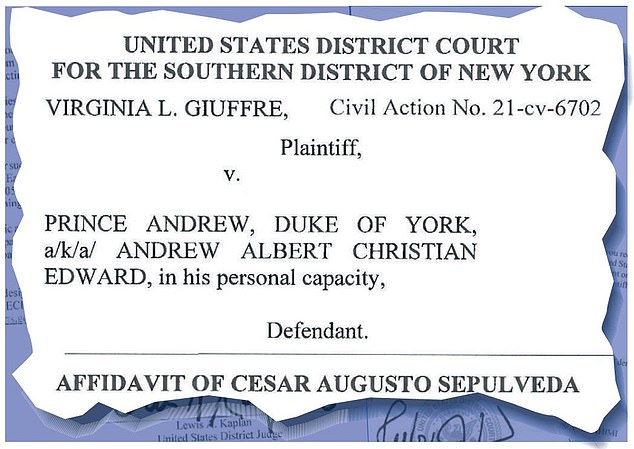 In other court documents,  Roberts’ lawyer David Boies detailed the extensive efforts they went to in order to serve Andrew.

They said that on August 12, four days after filing the lawsuit, he sent copies of the summons and the complaint to five different lawyers from three law firms who they had ‘reason to believe’ represented the Duke.

On the same day Boies’ team emailed the same documents [email protected], the Duke of York’s public email, and got a response acknowledging the email.

On August 18, a copy of the complaint and summons was sent to Blair Berk, the Los Angeles lawyer who reportedly represents Andrew. The next day Clare Montgomery of Matrix Chambers in London replied that she was ‘not authorized’ to accept service on behalf of the Duke.

On August 26, Boies said that his lawyers sent Andrew a copy of the summons and the complaint at Royal Lodge via a same-day courier service. They also sent a copy by regular post in the UK and via FedEx, which was sent on August 16 and was delivered on August 20.

According to Boies these measures ensure they have ‘properly served’ the summons according to the rules of the Hague Convention on the Service Abroad of Judicial Documents, to which the US and UK are parties. 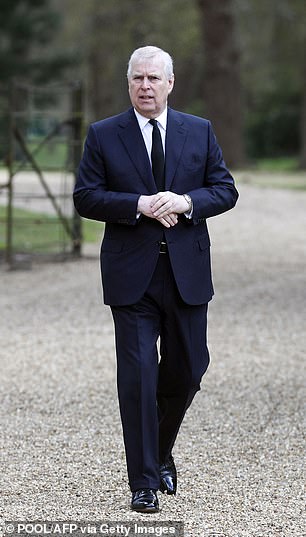 Virginia Roberts (left) claims she was forced to have sex with Andrew when she was 17. Prince Andrew (right in April) has denied the allegations and has not been charged

Timeline of another dramatic month in the Prince Andrew case

The serving has now been ratified under civil procedure rules as required by the Supreme Court of England and Wales. There was no comment from the Duke of York’s legal team last night.

They are now trying to access the sealed document Miss Roberts signed via the US courts because they believe it may prevent the case from progressing. The initial hearing is at 9pm UK time on Monday in a conference call before a Manhattan judge.

Miss Roberts’ representatives have indicated they will fight the move by the prince’s team, saying there is ‘no evidence’ he was ever intended to be covered by the previous legal agreement.

The 38-year-old, who is arguably Epstein’s most high-profile victim, has repeatedly accused the Queen’s son of having sex with her three times when she was aged 17 in London, New York and the British Virgin Islands.

Last month she launched a surprise legal move lodging a civil claim against the prince for rape, sexual assault and battery. Andrew, 61, has refused to comment on the case but has previously strongly denied her claims.

Miss Roberts alleges she was scouted and groomed as a schoolgirl by Epstein and his then-girlfriend, Ghislaine Maxwell, before being used by the billionaire financier as an underage ‘sex slave’.

In 2009 she reached a confidential settlement in Florida with the financier that may contain clauses which prevent her from taking action against individuals she has accused of being co-conspirators of the tycoon.

One of those was high-profile US lawyer Alan Dershowitz, who previously represented Epstein. He was accused of sexual assault by Miss Roberts in 2019.

But last month she reportedly dropped the claim because of the Epstein settlement, which released him from liability.

Her withdrawal was described in a joint court filing last month as ‘a compromise’ that should not be viewed as an admission by either party of the validity or invalidity of the claims about the settlement agreement. Mr Dershowitz has lodged a request with the Manhattan court dealing with the action against Andrew to have the original agreement unsealed, as he believes it may help to get the case against the prince thrown out.

The Harvard law professor said yesterday: ‘We strongly suspect that Virginia and her lawyers may have committed fraud on the court by filing a lawsuit against Prince Andrew after dismissing the battery case against me.

‘The same reasons for dismissing the case against me seem to apply to Prince Andrew. These documents should get the charges against Prince Andrew thrown out. It’s an airtight defence for Prince Andrew and a potential fraud on the court.’ 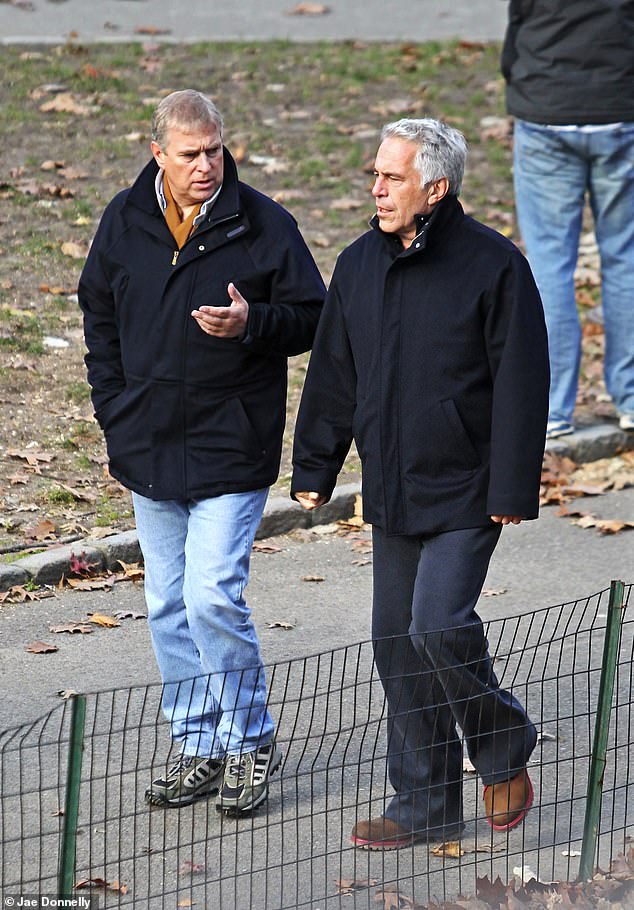 But Miss Roberts’ lawyer, David Boies, has said there was ‘no evidence Prince Andrew was intended to be covered by the release’.

Mr Boies said he was unable to comment on the details of her settlement with Epstein, citing its confidentiality, but added: ‘What I can say is that there is no evidence that Prince Andrew was intended to be covered by the release.

‘And, indeed, Prince Andrew has never himself asserted that he was intended to be covered by the release.’

In a letter obtained by ABC News in the US, Mr Bloxsome described the methods used by Miss Roberts’ legal team as ‘objectionable’.

In correspondence with a judge, he said: ‘They have made several public, indeed well-publicised, attempts at irregular service of these proceedings in this jurisdiction, in at least one case accompanied by a media representative.’

Mr Bloxsome maintained that under British law, a valid request for assistance from UK court officials must come from a judicial or diplomatic officer in the US.

US district judge Kaplan must now decide whether Andrew has been officially served. If he does, the prince will be given a deadline to respond.

The world economy is heading for recession in 2019