Luanda: The Duke of Sussex was prevented from visiting a project tackling HIV in babies when Angola’s President switched the event to the presidential palace.

Ana Dias Lourenço, Angola’s first lady, on Saturday, local time, gave the Duke a briefing on the Born Free to Shine initiative she is spearheading when he visited the presidential palace in Luanda.

Prince Harry had been due to meet a group of expectant mothers in a program to educate them on HIV and Aids as well as a group of HIV teenagers. He was also due to visit a neonatal ward linked to the project, but the venue was switched to the presidential palace because, it is understood, the first lady was eager to host the Duke rather than accompany him on the fact-finding tour. 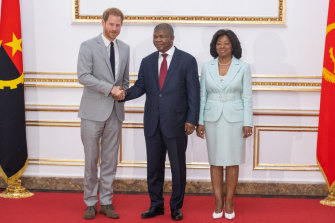 Through an interpreter, she told him: "In Angola, we are committed to the eradication of HIV transmission – statistics in our country are very concerning. The program is aimed at making children all free to shine."

Despite the country’s low infection rate, factors such as high fertility and a young population, combined with a lack of awareness, are driving infection rates up, and rates of mother-to-baby transmission are the highest in Sub-Saharan Africa.

The Duke left Angola to begin a tour of Malawi. 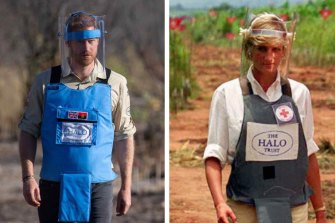 Prince Harry walks through a minefield in Dirico in Angola. Right: Princess Diana in 1997. Credit:AP

His time in Angola has been an opportunity for the prince to take up the cause of his late mother Princess Diana, who 22 years ago visited the country to highlight the dangers of landmines – a remnant of the 25 years of civil strife there.

Harry visited the northern city of Huambo, where an iconic picture was taken of Princess Diana in 1997 as she walked through a minefield.

‘‘It has been emotional retracing my mother’s steps,’’ he said of Diana, who died in a car crash in Paris a few months after her visit to Angola.

In Malawi he will visit educational, environmental and health projects.

ASC apologises to past AIS athletes subjected to ‘inappropriate treatment’