Russian prisoners should be used as guinea pigs for experimental Covid vaccines in return for their sentences being halved, demands pro-Putin politician

Prisoners should be used as guinea pigs for Covid-19 vaccines to speed up the race for a cure, a top Russian politician is demanding.

Inmates who have committed serious crimes would have their sentences halved in exchange for being injected with experimental vaccines, said Vladimir Zhirinovsky.

The pro-Vladimir Putin ultranationalist said: ‘We need to test faster on people – volunteers.

‘I assure you, those currently imprisoned would gladly agree to have new medication, drugs, vaccine tested on them if their term in jail and penal camp is halved.

‘Say a prisoner is serving a ten year term. ‘We’ll tell him: ‘Here is a new medication. 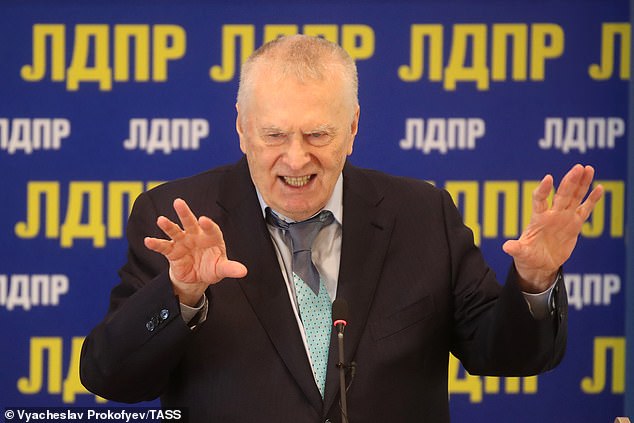 ‘It will be laboratory tested on you during two or three months and your term will get halved. You will only serve five years.

‘Thousands of people will respond.’

Zhirinovsky, leader of the Liberal Democratic Party, the third largest in the Russian parliament, was speaking to Rossiya-24.

A prominent MP, he came third in the 2018 Russian presidential election.

His plan has triggered an angry response.

Prisoners’ rights foundation Rossiya Sidyashchaya warned: ‘The proposal to use convicts as cattle is absolutely normal practice for Russia. ‘

The foundation’s lawyer Alexei Fedyarov likened it to the way the Soviet Union exposed its own people to nuclear tests in the Cold War. 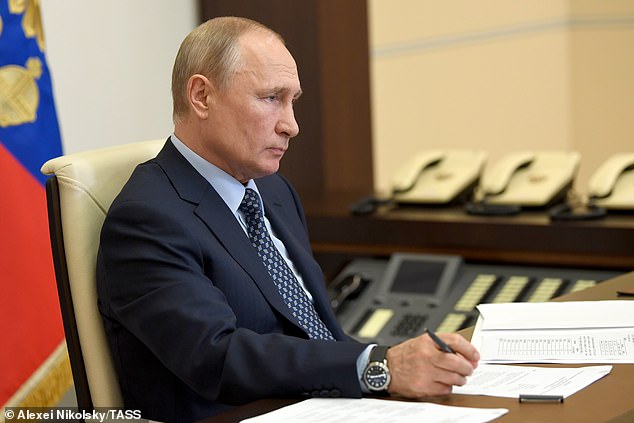 Vladimir Zhirinovsky is a pro-Vladimir Putin ultranationalist. Russia’s President Vladimir Putin is seen in the Novo-Ogaryovo residence during a videoconference meeting of Russian government officials to discuss the situation in Russia concerning the pandemic of the novel coronavirus disease on Friday

But he admitted some convicts may agree ‘just to reduce time and try to survive in unbearable conditions’.

A member of the Russian president’s human rights council, Alexander Brod, urged Vladimir Putin not to embrace the plan.

‘Our convicts are not guinea pigs, on which experiments can be carried out.

‘Thank God, we left behind the practices of the Gulag, when prisoners were perceived as free slaves who could be thrown to work on construction sites, paving roads, the development of the tundra’, he said.

Many had become disabled or their bones lay under Stalin’s roads across Siberia, he said.

Several Russian institutes are working on coronavirus vaccines, and are keen to speed up human trials.

The Gamaleya Scientific Research Institute of Epidemiology and Microbiology – part of the Russian. Health Ministry. – is due to start human trials by June 15.

The institutes’s head Vladimir Gushchin has predicted a vaccine being ready by autumn.

The Institute of Experimental Medicine and Vector State Research Centre for Virology and Biotechnology are also in the race for a viable vaccine.

Yale turns over artifacts worth $1m as part of looting investigation