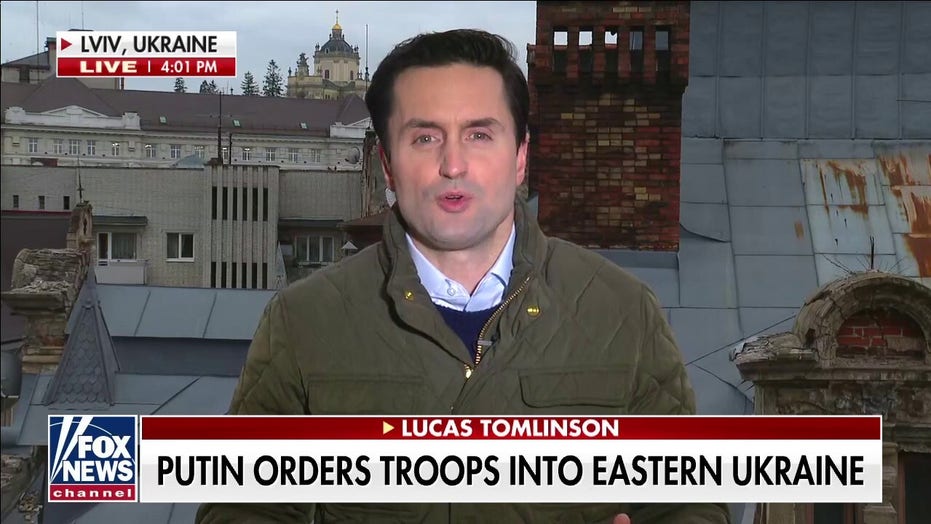 Russian President Vladimir Putin mocked one of his chief officials during a televised meeting Monday, telling the intelligence officer to “speak plainly.”

The Russian president grew testy with Director of Foreign Intelligence Sergey Naryshkin during a tense meeting on Ukraine. Putin was seemingly annoyed at what he characterized as unclear statements of support for declaring the independence of two Ukrainian regions.

“With the suggestion of Nikolai Platonovich, that we could give our, how to say it, Western partners, one last chance. Presenting them with the choice, in the shortest time frame, to force Kyiv to choose peace and implement the Minsk agreements,” Naryshin told the president. “In the worst case, we must make the decision that we are discussing today.”

“What does it mean, ‘in the worst case’? Are you suggesting we start negotiations?” Putin asked. “Or to recognize sovereignty?”

As Naryshkin stuttered, attempting to respond, Putin pressed him harder.

“I support the proposal about the entry of the Donetsk and Luhansk Peoples’ Republics into the Russian Federation,” Naryshkin responded calmly.

“Yes,” Naryshin finally responded. “I support their proposal for independence.”

Russian troops have arrived in eastern Ukraine hours after Putin announced that he would recognize the independence of two separatist regions, European officials said Tuesday morning.

Russian President Vladimir Putin gestures while speaking to the media at the Kremlin in Moscow, Russia, on Feb. 1, 2022.
(Yuri Kochetkov/Pool via AP)

“Russian troops have entered in Donbas,” the name for the area where the two separatist regions, Donetsk and Luhansk, are located, European Union foreign policy chief Josep Borrell said in Paris. “We consider Donbas part of Ukraine.”

When asked whether Putin’s decision to order Russian troops into the regions amounts to an invasion, Borrell said, “I wouldn’t say that’s a fully-fledged invasion, but Russian troops are on Ukrainian soil.”