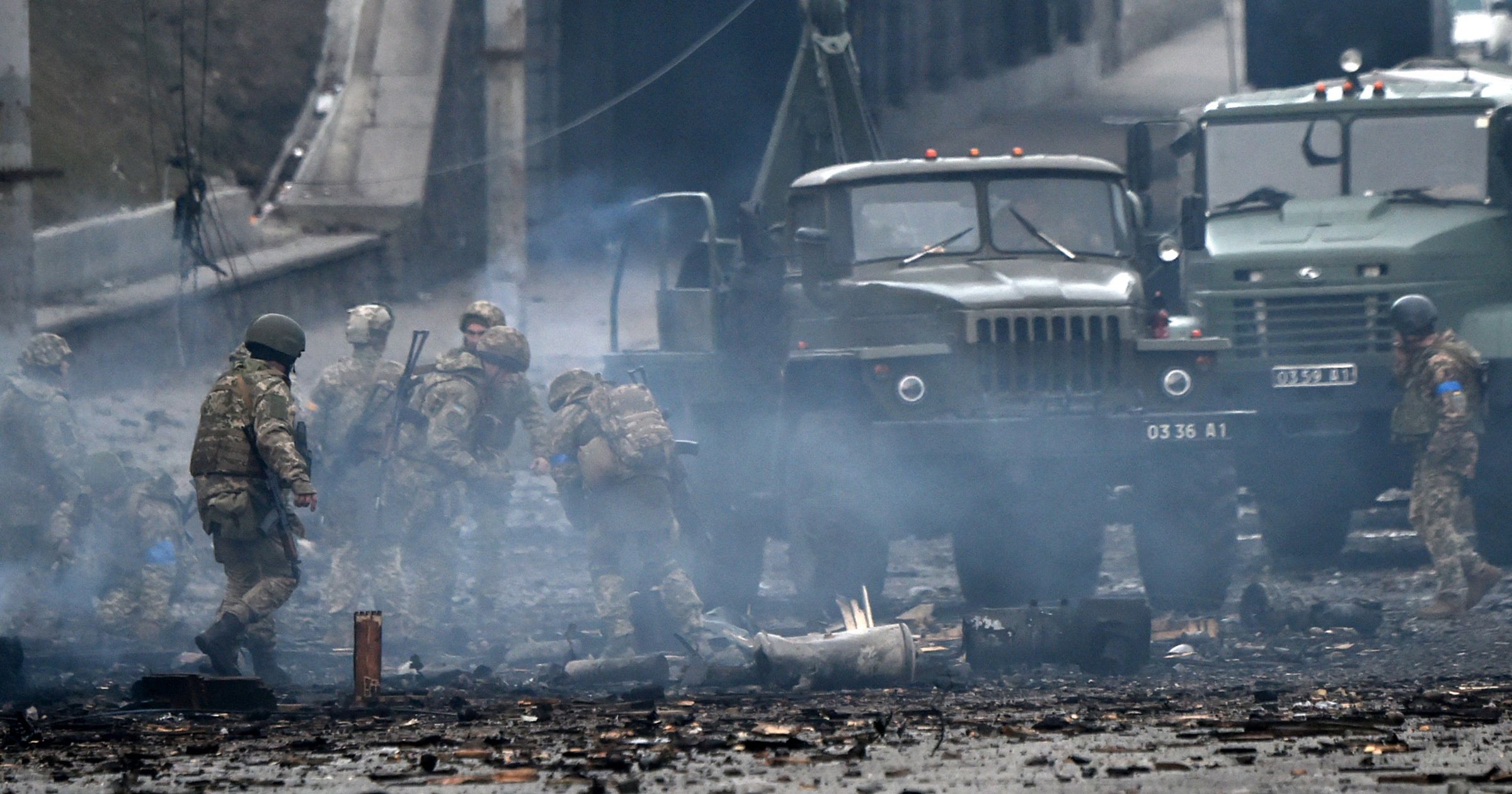 British and American intelligence suggested there were signs of a ‘temporary’ blip in Russia’s blitz towards the capital.

Meanwhile, operational problems also appear to be hampering the Russian advance, with social media footage seeming to show Russian tanks stalling, as the BBC reported a lack of fuel among their forces.

One local is said to have offered one tank driver a ‘tow back to Russia’ from near Sumy in eastern Ukraine.

Elsewhere, Twitter said access to its platform was now being restricted within Russia, while in London a woman threw a punched at a man holding a Russian flag at a protest outside the country’s embassy.

Meanwhile, unconfirmed reports on Saturday night suggested at least one child had died after a Russian air strike on a children’s hospital.

Tweeting about the situation on the ground near Kyiv, The UK Ministry of Defence (MoD) said earlier: ‘The speed of the Russian advance has temporarily slowed likely as a result of acute logistical difficulties and strong Ukrainian resistance.

‘Russian forces are bypassing major Ukrainian population centres while leaving forces to encircle and isolate them.

‘Overnight clashes in Kyiv are likely to have involved limited numbers of pre-positioned Russian sabotage groups.

A US Defence Official added: ‘We know that (Russian forces) have not made the progress that they wanted to make, particularly in the north’, but did not provide evidence.

‘They have been frustrated by what they have seen is a very determined resistance’.

Ukraine’s MoD asked locals to remove the names of streets, cities and villages from road signs in their regions in an effort to ‘confuse and disorient the enemy’.

Nonetheless, Russian troops continue to close in on Ukraine’s capital after another day of explosions and street fighting, which sent Kyiv residents seeking shelter or fleeing the city.

President Volodymyr Zelensky claimed Ukraine’s forces had repulsed the assault and vowed to keep up the struggle.

‘The real fighting for Kyiv is ongoing,’ he said in a video message, accusing Russia of hitting infrastructure and civilian targets.

But Mr Zelensky added later that he is open to talks with Russia.

Central Kyiv appeared quiet on Saturday, but skirmishes were reported on the edge of the city amid fears of Russian saboteurs entering the city. 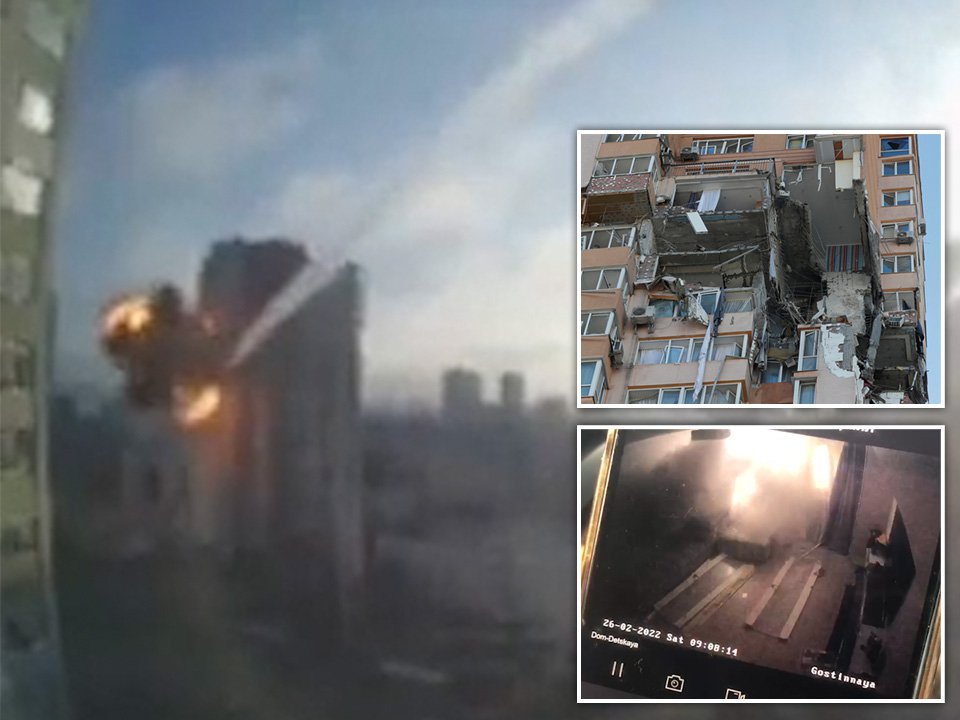 The city’s mayor, former boxer Vitali Klitschko, extended an overnight curfew to run from 5pm on Saturday until 8am on Monday.

He said ‘all civilians on the street during the curfew will be considered members of the enemy’s sabotage and reconnaissance groups’.

Russia claims its assault on Ukraine was aimed only at military targets, but bridges, schools and residential neighbourhoods have been hit since the invasion began on Thursday.

A civilian driver was also run over by a Russian tank, in a widely-shared video that appears to suggest the incident was deliberate.

Russian troops have entered Ukraine from the north, east and south but the battle for Kyiv is now the focus of the conflict.

A missile struck a high-rise apartment building in the south-western outskirts of the city, leaving a jagged hole of ravaged apartments over several floors. A rescue worker said six civilians were injured in the incident.

Ukraine’s health minister reported on Saturday that 198 people, including three children, have been killed and more than 1,000 others have been wounded during Europe’s largest ground offensive since the Second World World War.

It is unclear whether the figure, which is likely to rise, included both military and civilian casualties.

Kyiv officials urged residents to seek shelter, to stay away from windows and to take precautions to avoid flying debris or bullets.

UN officials said more than 120,000 Ukrainians have now left the country for Poland, Moldova and other neighbouring nations.

But it is unclear how much of the country is still under Ukrainian control, though Russia does not yet control the airspace.

Western officials believe Russian President Vladimir Putin is determined to overthrow Ukraine’s government and replace it with a puppet regime.

The US government urged Mr Zelensky early on Saturday to evacuate Kyiv but he turned down the offer, according to a senior American intelligence official.

Countries in Nato have increased the number of troops in allied countries in eastern Europe, but again ruled out deploying troops to fight Russia.

Instead, the US, the European Union and other countries have slapped wide-ranging sanctions on the country, businesses and individuals.

Elsewhere, more than 3,000 people have been arrested over anti-war protests inside Russia, with protesters taking to the streets across the world.

The Kremlin website is down and Russian TV channels have been ‘broadcasting Ukrainian songs’ while the hacker group Anonymous leaked the Russian MoD database.