Rayner VS Raab: ‘Grangela’ tells Dom to ‘go back to your sunlounger’ in brutal PMQs battle of the deputies accusing him of taking cash from the poor while squabbling with Foreign Secretary Liz Truss over who gets to use Chevening grace-and-favour mansion

Angela Rayner told Dominic Raab to go ‘back to your sunlounger’ in a brutal PMQs battle of the deputies today.

Ms Rayner delivered a series of vicious attacks as she faced off with Mr Raab, who was standing in at the weekly session while Boris Johnson is in the US.

She slated Mr Raab over the energy crisis, demanding the government cancels the removal of the £20-a-week uplift to Universal Credit.

And she swiped that he was busy squabbling with Liz Truss, who took his role as Foreign Secretary in the reshuffle last week, about who will get to use the ‘115-room taxpayer-funded mansion’ of Chevening.

In a reference to Mr Raab having been on a luxury holiday in Crete while Afghanistan descended into chaos, the deputy Labour leader stormed that he should ‘go back to his sun lounger and let me take over’.

For his part, Mr Raab shot back that Chevening is funded by a charity, and said that Ms Rayner was spouting a lot of ‘hot air’. 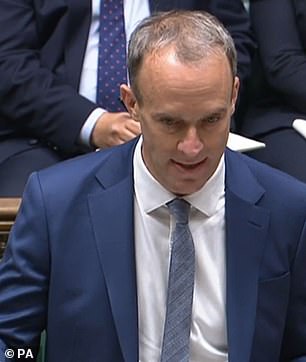 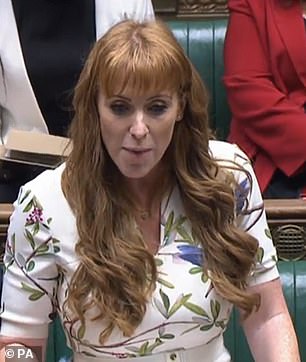 Angela Rayner delivered a series of vicious attacks as she faced off with Dominic Raab, who was standing in at the weekly session while Boris Johnson is in the US

Ms Rayner kicked off the bruising clashes by accusing the Government of hitting the pockets of working families by ‘cutting the income of a worker on £18,000 a year by over £1,100’ with tax rises.

‘That is almost exactly the same as an average annual energy bill. Just as energy prices are ballooning they have chosen to take the money that could cover a year’s worth of bills out of the pockets of working people,’ she said.

‘The Deputy Prime Minister has said the solution is for people to work harder. So, can he tell us how many days a worker on the minimum wage would have to work this year in order to afford a night at a luxury hotel, say in Crete?’

Mr Raab retorted: ‘Under this Government we cut income tax, saving every worker £1,200 each year, we have introduced and extended the national living wage so full-time workers are £4,000 better-off each year, we have doubled the free childcare for working parents worth up to £5,000 for every child every year.’

Ms Rayner goaded that Mr Raab did not ‘know how much his own holiday cost’.

‘So, let me tell him. A worker on the minimum wage would need to work an extra 50 days to pay for a single night at his favourite resort, probably even more if the sea was open.’

The Labour deputy leader added: ‘The Prime Minister has said it is just a short-term problem and we will leave it to the market to fix.

‘So can the Deputy Prime Minister guarantee that no-one will lose their gas or energy supply or be pushed into fuel poverty this winter?’

Mr Raab replied: ‘The Business Secretary has made very clear the energy supplies will continue, that our number one priority is to protect consumers.’

Ms Rayner joked that Mr Raab ‘doing his best’ to shore up supplies of ‘hot air’ in Mr Johnson’s absence.

But Mr Raab replied: ‘There’s no shortage of hot air on that side of the benches.

Ms Rayner concluded by telling Mr Raab to ‘go back to his sun lounger and let me take over’, adding: ‘Families across the country are worried about heating their homes while he’s complaining about having to share his 115-room taxpayer-funded mansion with the Foreign Secretary – the truth hurts, doesn’t it? – just as his Government are making choices that are making working families’ lives harder. 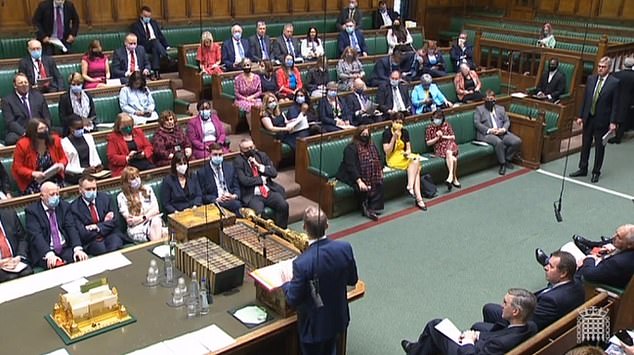 ‘A typical family is facing a tough winter this year: Universal Credit down a thousand quid; rent up 150 quid; gas bills up 150 quid; taxes up and food prices are soaring. Working people will have to choose whether to feed their kids or heat their homes.

‘The choice for the Deputy Prime Minister is will he make their lives easier or harder? So what will he choose – will the Government cancel the Universal Credit cut?’

But Mr Raab replied: ‘She should check her facts as Chevening is funded by a charity, not a penny of taxpayers’ money.

‘Let me also tell her the most disastrous thing for energy bills of hard-working people across the country would be to follow Labour’s plan to nationalise the energy companies, which the CBI says would cost as much as £2,000 on bills.

‘This Government is the one taking action to take the country forward, with a plan for the NHS, a plan for Covid and our plan is working – employment up, job vacancies up, wages up.’

‘When the looting starts, the shooting starts’: What does Trump’s tweet mean and where did it come from? – The Sun