Victoria's coronavirus lockdown has contributed to the highest rates of family violence in the state's history.

Victoria Police Deputy Commissioner Rick Nugent, speaking about the release of the state's latest annual crime statistics on Thursday, said the stay-at-home restrictions had contributed to the increase, which included notable rises in first-time victims and perpetrators of family violence.

The data showed reports of abuse in the home rose 6.7 per cent, with more than 88,000 family violence offences reported to police, fulfilling the predictions of family violence from services such as Safe Steps, which warned in April it was expecting an "unprecedented spike" in incidents due to the state's lockdown measures.

Mr Nugent said the figures included an increase in incidents where children were involved, both as perpetrators and victims.

“That’s likely to be a result of pressure on people. Whether they’re not working, stuck at home, financial stress or other factors that may exist."

Domestic Violence Victoria chief executive Tania Farha said the rise in cases came after Victoria Police had tried to break down the barriers for victims to seek help following the Royal Commission into Family Violence.

"We are anticipating a surge in demand for specialist family violence support when restrictions end and as Victoria begins down the road to recovery from the pandemic," she said.

She said the surge was expected partly because of the gendered impacts of other elements of the pandemic response, which have seen women disproportionately suffer economic losses.

The latest data, provided by the Crime Statistics Agency, covers the year to June 2020. Victoria was under lockdown for more than three months of that time to contain the spread of the deadly COVID-19 pandemic. 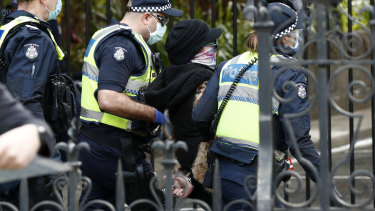 A woman is detained by Victoria Police on August 09, 2020.Credit:Darrian Traynor

Police issued more than 6000 fines between the end of March and June – a total of more than $10 million at $1652 each. Men in their 20s were most likely to be caught breaking the rules.

About 20 per cent of all fines were issued on the Easter weekend in April, when Victorians could only leave home to buy food and supplies, to provide care, for exercise, and work or education.

More than 65 per cent of those who broke the rules during Victoria's first wave of coronavirus already had criminal records.

“During that period there were also over 78,000 calls [to the Police Assistance Line] in relation to breaches of the Chief Health Officer directions,” Mr Nugent said.

The popular holiday destinations of Corangamite and Colac-Otway in the state's south-west led the way with the most fines per capita. There were concerns, before checkpoints were implemented, that Melburnians were illegally visiting regional areas.

Colac-Otway Shire mayor Jason Schram said he hoped people wouldn't flood back to the coastal towns before the current restrictions on Melburnians are lifted.

"It's been tough but don't let all the hard work come undone by wanting to get out early," Cr Schram said.

Across the board, the state experienced a 4 per cent rise in crime in the past year as more than half-a-million offences were recorded.

Premier Daniel Andrews said his government was committed to making sure victims of family violence could continue to access the care they need.

"It is a very significant challenge. That is why we have responded as best we can," he said.

The data also shows police are grappling with a rise in street gang crime, as the force launches a dedicated new operation to crack down on robberies, knife attacks and home invasions.

Mr Nugent said more than 42 youth gang groups were on the state's watch list. Many were moving outside their traditional neighbourhoods and into new areas with less people on the streets due to lockdown restrictions, he said.

Police are also focusing on driving down crime in the state's hot spots, including Yarra City Council in the inner city. The area, home to the safe injecting room in Richmond, has seen drug-related crime rise more than a third.

“The overall number of drugs related offences has been a significant increase in Yarra," Mr Nugent said.

OAP, 81, used her PARROT to torment neighbours and smeared dog poo in garden – The Sun