Democratic Rep. Andy Kim donates the J. Crew holiday sale suit he wore on the day of the Capitol riot to the Smithsonian and says it’s a symbol of ‘resilience and hope’

Rep. Andy Kim revealed on Tuesday that he donated the blue J. Crew suit he wore to the Capitol Building on January 6 to the Smithsonian.

In one of the viral images from January 6, the New Jersey Democrat is seen crouching down in his ‘deep ocean’-colored suit and picking up trash left by the MAGA mob.

In a series of tweets about the Smithsonian donation, Kim called the suit – purchased off-the-rack during J. Crew’s holiday sale – ‘unremarkable’ but said it became a symbol of ‘resilience and hope’ to people who wrote to him. 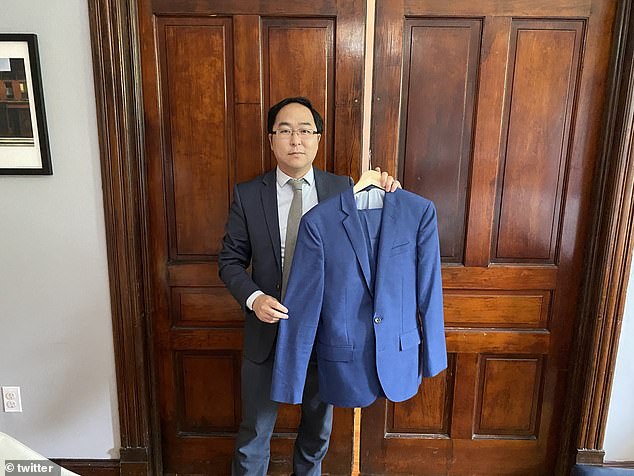 Rep. Andy Kim, a New Jersey Democrat, shows off the blue suit he wore on January 6 that he donated to the Smithsonian 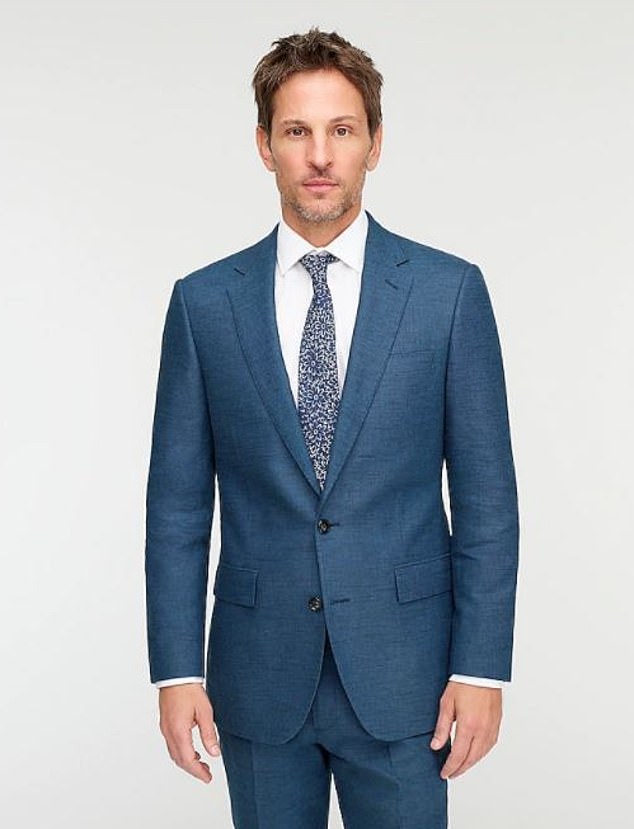 The suit is a ‘deep ocean’-colored suit from J. Crew that he said he bought off-the-rack during the store’s holiday sale. It’s currently on sale for $239.99 for the jacket and $129.99 for the pants 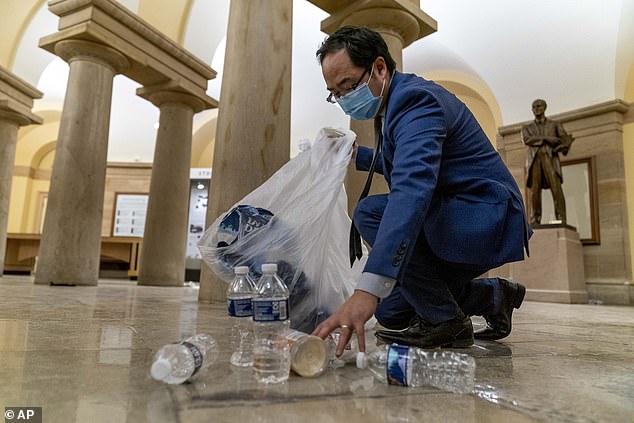 The visual of Rep. Andy Kim in his blue suit picking up debris and trash after the January 6 insurrection went viral 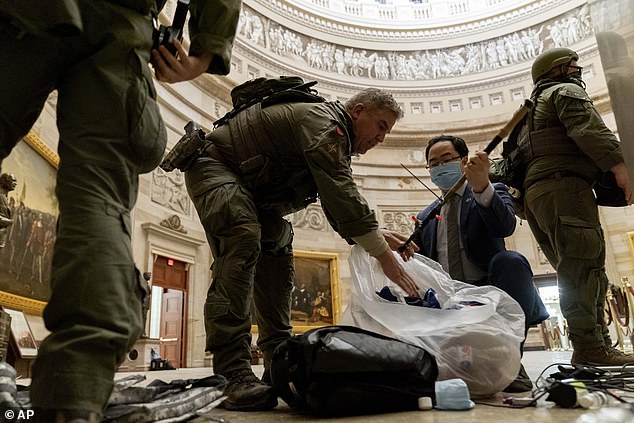 ‘I wanted a bright blue new suit to wear to Biden’s inauguration,’ he said.

However, upon hearing that the Democrats had taken control of the U.S. Senate with Sens. Raphael Warnock and Jon Ossoff’s wins in Georgia run-off races, Kim said he decided to wear the suit on January 6, when Congress would certify Biden’s election.

‘I bought it to be a suit of celebration, and I thought what better way to give the suit meaning than to wear it when I confirm the electoral college and then later to the inauguration,’ Kim said.

As Congress was meeting to ceremonially count the Electoral College votes, thousands of former President Donald Trump’s supporters broke into the Capitol Building, attacking police officers, breaking furniture and windows and making a mess of the place.

Kim was captured cleaning up debris in the Capitol Rotunda.

‘Like my suit, what I did on Jan 6 on its face was unremarkable,’ Kim said. ‘I saw a mess and cleaned it. I wanted to right the wrongs of that day as quickly and as tangibly as I could. Neither my suit nor my actions are on their own worthy of memory, but the story didn’t end there.’

Kim said he also wore the blue suit on January 13.

‘I wore it when I walked onto the House floor to cast my vote for impeachment,’ he said. ‘The suit still had dust on the knees from January 6.’

He said he wore it again ‘so I would have no doubt about the truth of what happened.’

‘When I got home I vowed to never wear the suit again,’ Kim said. ‘I even considered throwing it away. It only brought back terrible memories. I could never separate that suit from the events of January 6. I hid it in my closet as I never wanted to see it again.’

Kim then said that he started to get cards.

‘Many from kids,’ he said. ‘Strangers who wanted to tell me how they felt when they saw the photo of me. They talked about the blue suit. The suit meant something different to them than it did to me.’

‘People wrote saying the blue suit gave them a sense of resilience and hope,’ he said.

The New Jersey lawmaker said he was in a ‘tough place,’ regretting that he didn’t do more to keep people safe.

‘But feeling of hope/resilience in the cards helped me feel stronger,’ he said.

Kim also recalled getting the call from the Smithsonian asking for the suit. 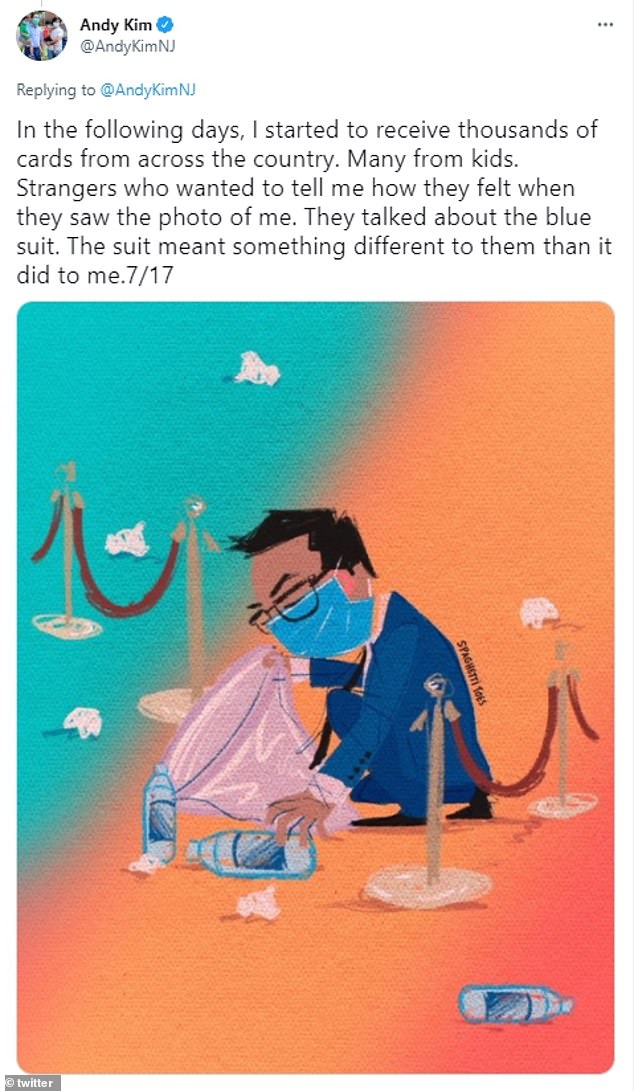 Rep. Andy Kim shared illustrations that people sent to him in the aftermath of the January 6 insurrection 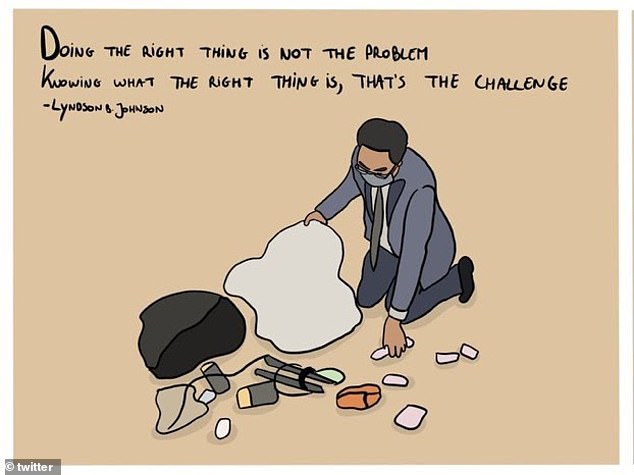 Another piece of artwork sent to Rep. Andy Kim after the photo of him in the blue suit went viral 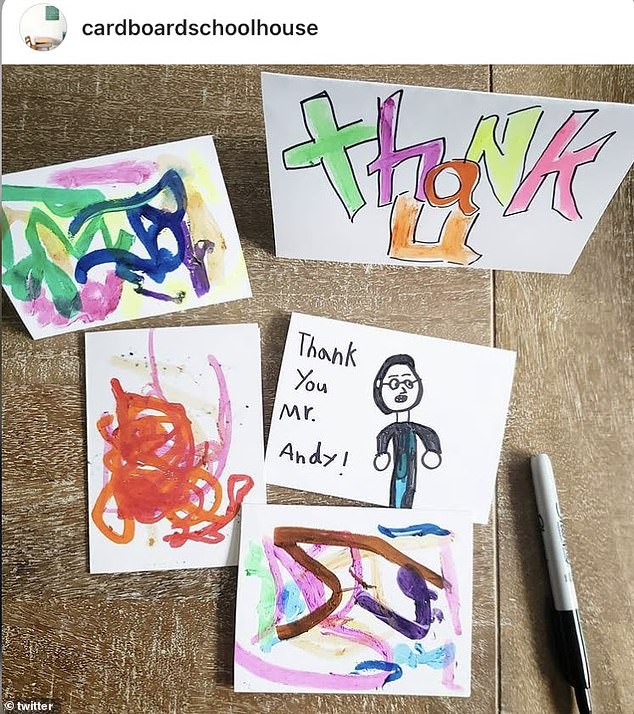 Rep. Andy Kim shared a number of thank you cards he received after the January 6 Capitol attack

‘Honestly, I wasn’t thinking about how the day would be remembered as I was still living it,’ he said. ‘In fact, after the call, I had to pull over on the side of I-95 as I started to tear up uncontrollably while driving home. I was still not ok.’

Kim said when he started thinking about what a museum exhibit would look like he envisioned broken glass from shattered doors, torn flags and signs. Video of the mob trying to hijack our democracy.’

‘But there was so much more to that day,’ he continued. ‘The story of that day wasn’t just destruction. There was hope and resilience. The Capitol Police were heroes that saved lives. Colleagues and staff showed bravery. I hope those stories are told. They help tell a story of light on one of the darkest days in our democracy.’

Kim said he told the Smithsonian yes to donating the suit ‘because the telling of the story of January 6 isn’t optional, it is necessary.’

‘It’ll be surreal to one day take my kids to the Smithsonian and show them the blue suit behind glass,’ he said. ‘I hope they grow to know the truth of January 6, but I also hope the story ultimately is one of hope and resilience.’

‘I hope that is what they and others see in the blue suit,’ he concluded.