Challenging statewide lockdown measures is not for the faint-hearted.

Those brave enough to ask whether there is, perhaps, another option are often categorised as anti-mask-wearing, COVID-19-denying loonies who want Australia to go the way of India, Brazil or the United States. 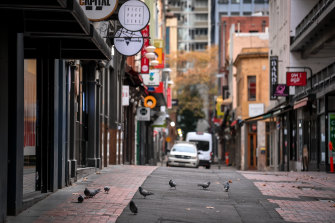 A near empty Melbourne laneway as the city goes through its fourth lockdown.Credit:Eddie Jim

Part of the problem is that our governments initially required a certain level of fear in society in order for us to behave and abide by restrictions. In those darker days Daniel Andrews described the virus as cunning and wicked while Scott Morrison spoke of a serious and escalating threat. In recent weeks Victoria’s Chief Health Officer Brett Sutton said new variants were “more infectious than anything we saw in the beginning and middle of 2020”.

No one was safe.

This language was a useful tool to garner support from the public and rally the nation, but is it still proportionate?

In other debates Australians seem a little more switched on to political hyperbole, whether it be the so-called “drugs scourge” or labelling asylum seekers as “boat people” who threaten our national security. We took it with a grain of salt. And debate over our policy response was permitted. 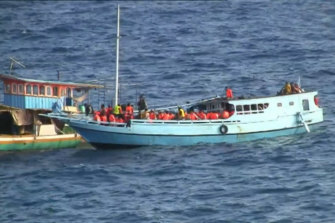 Australians tend to use hyperbole when referring to perceived security threats.Credit:ninevms

There is clearly a threat from COVID-19. The number of recorded deaths worldwide is more than 3.5 million with the United States, Brazil and India the hardest hit. In Australia we have, for the most part, been lucky. There have been 30,000 reported cases and, sadly, 910 deaths.

On its own, that statistic is tragic. Each one of those 910 lives was someone’s son, daughter, friend or family member. But it’s also important to put that statistic in context.

In 2017 there were more than 1200 deaths due to influenza in Australia. In 2019, the flu rate was even higher, although thankfully the death rate dropped to 900. There were no daily press conferences, no stay at home orders, no border or business closures.

There is little doubt that COVID-19 is far more harmful and deadly than the seasonal flu, but much of the language and public health response seems to be disproportionate to the risk. 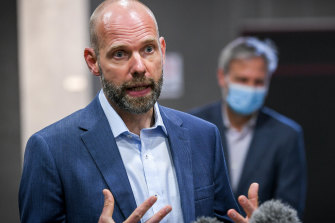 Scientists still debate the risk of death from COVID-19. Age, nationality and treatments, as well as under-reported and asymptomatic cases, make it difficult to get a clear infection fatality rate. But most studies have found that COVID-19 is estimated to have a death rate between 1 and 3 per cent. Or, another way to look at it is that there is a survival rate of between 97 and 99 per cent.

The threat of death isn’t the only metric to measure COVID-19, but it’s surely grounds to discuss the level of infection we are willing to accept, as well as the need for a temporary, targeted and proportionate response.

At the beginning of the pandemic we were persuaded to give up some of our freedoms in order to flatten the curve of infections. Doing so would slow the spread of the virus so that our healthcare system could cope with the number of people requiring care. A year on, that mantra has been replaced by “aggressive suppression”, which is a political euphemism for elimination. Sutton told us on Wednesday: “We absolutely have to drive back down to zero. That’s been the national strategy for a reason.” 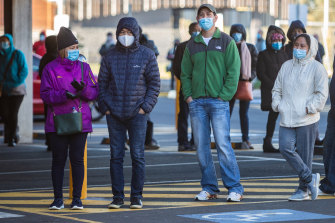 People wait in line to get a COVID-19 vaccine in Melbourne.Credit:Scott McNaughton

The concern remains that 18 months into this pandemic and armed with better treatments, a clued-up population, improved hygiene and stronger testing and contact tracing measures, health authorities still use the same sledgehammer approach to tackle any outbreak of the virus.

It surely begs the questions, if zero cases is the goal, will we ever have a more nuanced approach?

It’s undeniable that there are economic and human consequences for strict border controls and lockdown measures.

A vaccinated couple who repeatedly returned negative COVID-19 tests were recently separated from their newborn baby by quarantine in Queensland when there were no cases in the community. The family of an eight-year-old Victorian boy who drowned on school camp were denied an exemption to hold a funeral despite being more than 200 kilometres from the nearest case.

These are not arguments against restrictions but are examples of the disproportionate response of blanket restrictions and the human cost.

Throughout the pandemic we have been repeatedly told that a vaccine would be our exit strategy, our golden ticket back to a normal life. The rollout has been disastrously slow, but a key selling point was what we could gain from getting the jab.

But politicians at both a state and federal level remain unwilling to commit to a certain level of immunity that we will need to open the borders. At this stage, vaccinated Australians are still required to live under any lockdown laws.

At the risk of being the bearer of bad news, the World Health Organisation has concluded that it’s “very unlikely” countries will entirely eradicate the coronavirus. But it will take a brave politician to acknowledge it, and who can blame them.

When Virgin chief executive Jayne Hrdlicka dared to suggest that Australia should discuss opening its borders as the vaccine rollout ramped up, even if that meant some people might die, she was slammed as callous. In reality, she was daring to change the narrative, something too many politicians have been afraid to do.

In our increasingly polarised society it may be difficult to believe that it is not a binary choice between aggressive lockdowns and letting the virus spread in order to save the economy.

We have been given tools such as improved testing, contact tracing, social distancing, masks, sanitiser and hotel quarantine that can limit the risks.

COVID-19 remains a threat, but it is naive to think society will bounce back from the cultural, educational, economic and long-term health issues that have been caused by heavy-handed restrictions.