Checkpoints along the "ring of steel" separating metropolitan and regional Victoria might be left unattended in heavy rain if police deem conditions unsafe for work.

The boundary came into force on Wednesday night as country Victoria moved to eased restrictions, with Melburnians facing a new $4957 fine if they are caught travelling to regional areas without an approved reason. 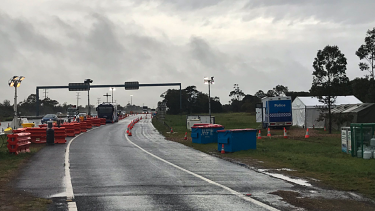 But footage from Seven News showed cars travelling through an unmanned roadblock on the Princes Freeway at Little River on Thursday morning, just hours after the new directions began.

The checkpoint was unattended for about half an hour, Seven reported.

A police spokeswoman said the checkpoints were attended 24 hours a day and a safety officer would determine if officers needed to pack up and allow vehicles to pass freely.

Checkpoints might shut if rain had been heavy enough to create an unsafe environment for police and motorists, she confirmed.

Premier Daniel Andrews on Thursday warned motorists not to flout the restrictions.

"Anyone who thinks they might take a punt on heading to regional Victoria and not getting caught, I think your odds are very poor," he said.

The regional/metro boundary, where Australian Defence Force troops are working with police, is designed to protect the low number of coronavirus cases in country areas.

There were long delays at some checkpoints on the first day of the operation, with Nine News reporting queues of up to six kilometres.

Police union secretary Wayne Gatt said operating on wet roads was one of the most dangerous environments for police.

He said risk assessments were made by officers on the ground to ensure WorkSafe guidelines were being met.

"It's about keeping people alive," he said.

"We have lost police on roads. Working on freeways is dangerous, as we know.

"If it's belting rain and you are getting cars to slow from 100km/h to 40km/h … that has caused multi-car collisions in the past."

Mr Gatt said accidents had occurred at roadside operations in the past as cars slowed down, as they were directed to merge into a checkpoint and, occasionally, as they travelled on the other side of the road to the operation.

"It's a situation of fact and degree," he said.

"If it's coming down cats and dogs, there may be very little visibility."

The police spokeswoman said the practice was for the safety of both police and members of the community. And she said the checkpoints weren't the only strategy for catching Melburnians who shouldn't be in the country.

"The checkpoints are a highly visible deterrent, but should not be the only reason stopping someone from travelling if they do not have a permitted reason to do so," she said.

"While you might get through a checkpoint, you will not be missed by police in rural and regional areas, who are actively patrolling to protect regional communities from coronavirus. This includes roving patrols around checkpoint areas."

What is the ‘R’ value? Why is a rate of number one critical to coronavirus fight? – The Sun

Can grandparents look after grandchildren now?