Rishi Sunak today hinted the NHS Covid-19 app could be tweaked amid fears that millions of Brits will be ‘pinged’ and told to self-isolate every week after ‘freedom day’.

The Chancellor said Sajid Javid, the Health Secretary, is ‘aware of the frustration that people have’ with the app.

He said that ‘most people’s concerns rest with how the app is working’ and Mr Javid is ‘looking at what the most appropriate, balanced and proportionate approach to isolation is’.

His comments are likely to be seized upon by business chiefs who have warned the Government the app will cause chaos after July 19.

It comes after reports that many people are simply deleting the app to avoid being contacted and told to self-isolate.

Meanwhile, NHS bosses have called on ministers to lift the self-isolation rules early for health workers who have had both vaccine doses amid fears of staff shortages.

They are concerned that rising case numbers and the rising number of people being ‘pinged’ will result in many NHS staff being told to self-isolate, putting an increasing strain on the frontline. 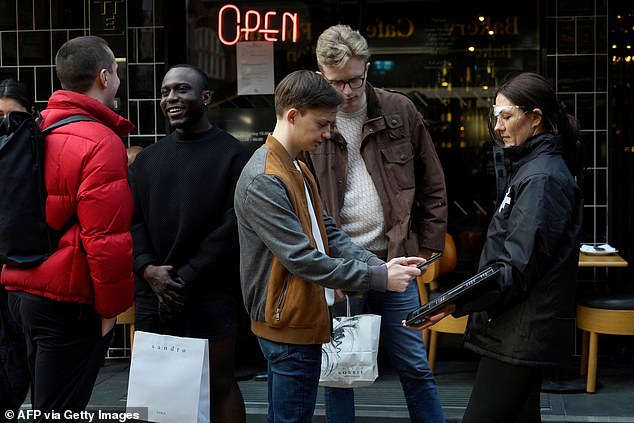 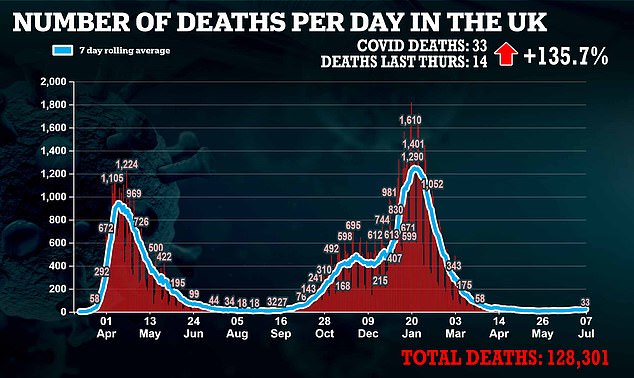 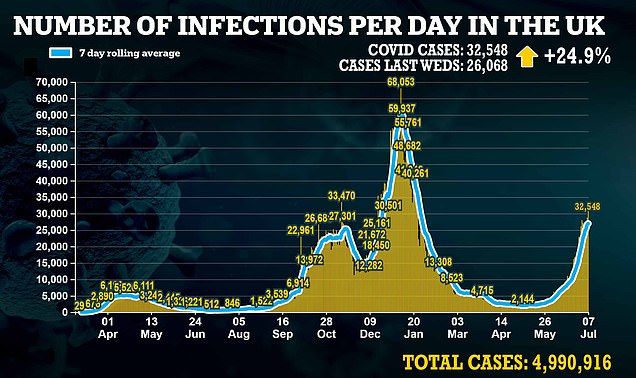 Mr Sunak told Sky News: ‘I’ve spoken to the Health Secretary about this and he’s aware of the frustration that people have around this.

‘We have two different systems for the test and trace: we have obviously the NHS one, and we also have the app.

‘I know most people’s concerns rest with how the app is working and the Health Secretary is aware of that.

‘The app counts for the majority of the people who need to isolate, I understand, on the numbers and he’s looking at what the most appropriate, balanced and proportionate approach to isolation is in these circumstances.’

Boris Johnson has promised to tear up most of England’s coronavirus regulations at Step Four of his lockdown exit road map, expected on July 19, but a major relaxation of self-isolation rules will not be brought in until August 16.

The expected surge in cases as a result of restrictions being lifted is predicted to lead to an increase in contacts being ‘pinged’ by the NHS Covid-19 app or being told by contact tracers to isolate.

Mr Johnson yesterday defended the self-isolation policy in the face of a mounting backlash from business leaders.

The PM told MPs: ‘All these decisions are a balance of risk. This is a highly contagious disease. We have to do what we can to stop its spread.

‘We have been looking at all the data and trying to strike the right balance. You could say we are going to dispense altogether with self-isolation and move straight to a testing regime.

‘The difficulty with that is that you would effectively be allowing many more people to be vectors of disease than by continuing with our plan.’

From August 16, people in England who have received both doses of a vaccine – as well as the under-18s – will no longer have to self-isolate if they have been in contact with someone who tests positive for Covid-19.

Iceland supermarket boss Richard Walker said the difference between lockdown being lifted and self-isolation rules being eased would result in a ‘s*** show for business’.

He said: ‘Our Covid-related absences are growing exponentially. Within a week or two they’ll be the highest ever.’

Hospitality chiefs have warned the delay between restrictions being lifted and the self-isolation rules being eased risks ‘the summer being cancelled and vast swathes of the population unnecessarily confined to their homes’.

Kate Nicholls, boss of trade body UKHospitality, said: ‘This is not just a hospitality issue – it is affecting the whole economy and we need an earlier test to release system in place.’

Helen Dickinson, chief executive of the British Retail Consortium, called for the August 16 date to be brought forward. 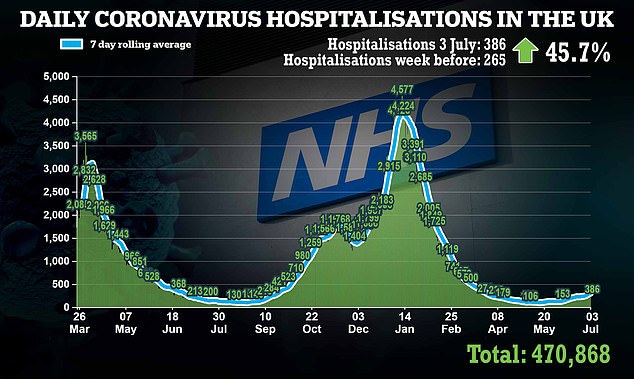 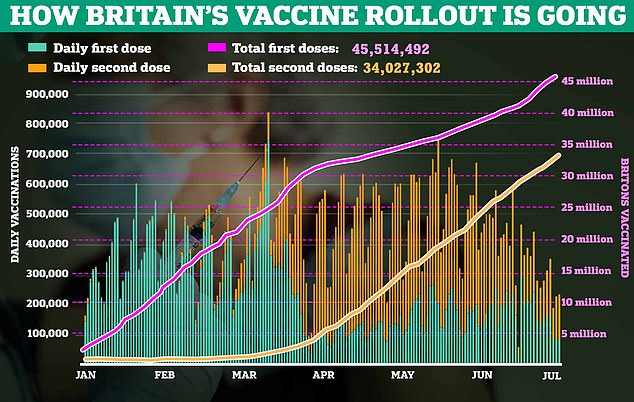 ‘We are already seeing a serious impact on retail operations as a result of staff having to self-isolate and this will only get worse right across the economy, as cases are already rising fast and the final restrictions are eased,’ she said.

Health bosses have urged ministers to ease the self-isolation rules early for double-jabbed NHS workers amid fears ‘very high pressure on staffing levels’ will get worse.

Chris Hopson, chief executive of NHS Providers, told The Times: ‘Trust leaders are already asking whether, if double-vaccinated members of the public won’t be required to self-isolate after August 16, this date can be brought forward for NHS staff, who were one of the first groups to be vaccinated.’

Danny Mortimer, deputy chief executive of the NHS Confederation, said there are ‘rapidly rising levels of staff absence, in part because staff are having to isolate for Covid reasons’.

At Prime Minister’s Questions, Mr Johnson refused to say how many contacts he expected to be required to self-isolate before the changes are rolled-out.

‘What we will be doing is moving away from self-isolation towards testing over the course of the next few weeks, and that is the prudent approach,’ he told MPs.

Mr Johnson has acknowledged there could be 50,000 coronavirus cases a day by July 19 and ministers have warned this could rise to 100,000 later in the summer.

Yesterday saw a further 32,548 lab-confirmed Covid-19 cases in the UK, the highest daily reported total since January 23, and a further 33 deaths.

The number of Covid-19 patients in hospital in England stood at 2,144 as of 8am on Wednesday, according to the latest figures from NHS England – up 43% from a week earlier and the highest number since April 10.

And a total of 416 hospital admissions of people with Covid-19 in England were reported for Monday, NHS England also said, up 70% from a week earlier and the highest number since March 15.

In response to questioning from Labour leader Sir Keir Starmer, Mr Johnson said scientists are ‘absolutely clear that we have severed the link between infection and serious disease and death’ as a result of the vaccination programme.

But on Monday the Government’s chief scientific adviser Sir Patrick Vallance was more cautious, saying ‘vaccines have weakened the link between cases and hospitalisations, but it’s a weakened link, not a completely broken link’.

Despite the increased cases, Mr Johnson told the Liaison Committee of senior MPs that ‘it looks as though’ Step Four of England’s road map out of lockdown will go ahead as planned on July 19.

But the think tank’s projections were for an even higher level of daily infections, up to 133,000 by August 4, which would result in 4.6 million a week self-isolating.

Professor Christophe Fraser, from Oxford University’s Nuffield Department of Medicine, who advises NHS Test and Trace, told Times Radio: ‘At the moment the epidemic is growing exponentially; we know that exponential (growth) very rapidly leads to big numbers – we’re two doublings away from 100,000 cases a day. And the doubling rate has been consistently between nine and 11 days so that’s not a lot of time ahead.

He added that 100,000 cases a day ‘would result in a large amount of people being traced’.

Who is Stas Reeflay and what is the killing video on YouTube?

Government hands £100m to consultants to help them plan for Brexit