Richmond, Virginia: A statue of Confederate general Robert E. Lee has been removed from its base in Richmond, Virginia’s capital, after a yearlong legal battle over a monument that has been the focus of protests over racial injustice.

As onlookers watched, crews secured the 6.4-metre bronze statue of the US Civil War leader to a crane that hoisted it off its 12.2-metre granite pedestal. It was eventually cut in two pieces. 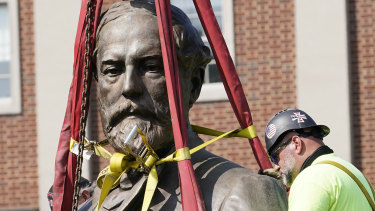 Since 1890, the towering memorial has stood at its location on Monument Avenue in Richmond, the former capital of the pro-slavery Confederacy, a group of Southern states that fought against Union forces in the 1861-65 Civil War.

The statue was one of the largest Robert E. Lee monuments still standing in the United States. Memorials that honour leaders of the Confederate side have become targets of protests against racism. Defenders of the statues say they are tributes to the bravery of those who fought to defend the South.

Lee’s surrender came so fast – after less than an hour of work – that hundreds of onlookers were caught by surprise. Workers who had affixed slings to the statue from a cherry picker began waving their arms, urging the crowd to cheer, and one of the workers held up five fingers, then four, then three, two, one, and a crane lifted the statue from its base. 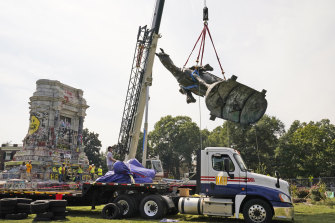 Crews move the horse of Confederate General Robert E. Lee one of the largest remaining monuments to the Confederacy.Credit:AP

Officials have said workers would move the statue of Lee, dressed in military attire and mounted on top of a horse, to a secure, state-owned storage site until a decision on its future is finalised.

The hoisting of the statue was captured on the Twitter feed of Governor Ralph Northam, a Democrat, who announced plans to remove it in June 2020, 10 days after a white Minneapolis policeman killed George Floyd, who was black, sparking nationwide protests.

During the last six years, more than 300 symbols of the Confederacy and white supremacy have been taken down, while some 2000 still stand, according to the Southern Poverty Law Centre.

“He went more quietly than some of the others did,” said Melody Barnes, who is black and lives on Monument Avenue near the circle where Lee had stood. 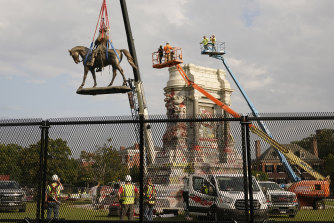 Crews remove a towering statue of Confederate General Robert E. Lee in Richmond, Virginia, the ex-capital of the Confederacy.Credit:AP

Moments after the statue came off its base, JaPharii Jones, the head of BLM 757, broke through the barricades and ran around the traffic circle carrying a Black Lives Matter flag. Capitol Police quickly descended on the metal barricades to prevent more people from breaking through.

State Senator Jennifer McClellan, D-Richmond, had just dropped her children at school and rushed to the site when she heard cheers go up. She ran to see, and a few minutes later, dripping with sweat, McClellan- who is black – fought back tears.

“I keep thinking about when this statue went up, John Mitchell said […] it’ll be a black man that takes it down,” McClellan said, referring to a legendary black newspaper editor from the Jim Crow era. “And then I saw the contractor take a picture in front of it,” she said, gesturing to Devon Henry, who is black and oversaw the tricky logistical effort. “I think the healing can begin.”

Henry, 43, faced death threats after his company’s role in removing Richmond’s other Confederate statues was made public last year, the Associated Press reported.

He said this was the 21st Confederate memorial he has taken down since last northern summer. It went quickly, he said, because his crew had a year to study images and had gained enormous experience removing others. 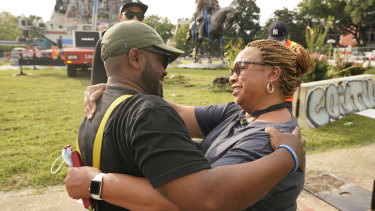 Devon Henry, owner of the construction company that removed the statue, hugs his mother, Freda Thornton, after the removal of the statue from Monument Avenue, Richmond, Virginia. Credit:AP

He, too, thought about the words of John Mitchell, he said. “That quote’s been sticking with me a long while, as I was going through planning this thing,” Henry said. “It’s definitely extremely meaningful.”

But after all the planning, and with so much at stake, his first reaction was simple: “I’m relieved,” he said.

On Thursday, workers were due to remove plaques from the monument’s base and replace a time capsule believed to be at the site with a new one. The base will remain in place as the community reimagines Monument Avenue.

Last Thursday, the Virginia Supreme Court unanimously ruled in two cases that Northam could remove the statue. In 2020, the removal was challenged by nearby residents and a descendant of the family who transferred ownership of the statue to the state.

William Shakespeare, 1st man in world to get approved COVID vaccine, dies at 81

Can I go to work during coronavirus lockdown? Key worker criteria and when you CAN leave your house