“I would never, ever thank her for not aborting me.” That is what the daughter of “Jane Roe” – the woman whose Supreme Court case, Roe v Wade, led to the legalisation of abortion across the US – told her birth mother, in one of their only interactions.

The conversation took place on the phone and became so heated that a planned meeting between the two was shelved. When “Jane Roe” – real name Norma McCorvey – died of heart failure in 2017, she had never met the daughter known until two days ago only as “Baby Roe”.

On Thursday, 48 years after McCorvey won her lawsuit, “Baby Roe” was finally named as Shelley Lynn Thornton, now a 51-year-old mother of three.

Thornton’s identity was revealed, along with those words – words that like everything connected to one of the most divisive cases in US history, will be dissected by the pro-life and the pro-choice communities. Words that should not be weaponised by either side of the abortion debate, but be seen for what they are: a real human reaction to extraordinary personal circumstances.

Because when Norma McCorvey appeared on the steps of the Supreme Court on Jan 22, 1973 with women’s rights lawyer Gloria Allred to celebrate the ruling that “the Constitution of the United States protects a pregnant woman’s liberty to choose to have an abortion” – it was already too late. The 22-year-old Dallas waitress, mired in poverty and addiction, had long since given birth and relinquished her daughter for adoption.

So “Baby Roe” lived, loved, married and became a mother herself – remaining anonymous, until now. She has finally decided to speak to a journalist, Joshua Prager, for his new book The Family Roe: An American Story.

But anyone hoping that Thornton will be the one to untangle the ethical, moral and political knot that has contorted American opinion for over half a century will be disappointed.

The decision to unveil herself now comes not in reaction to the draconian ban on abortion after six weeks pushed through by Texas’s Republican-dominated legislature last month – upheld by the Supreme Court last week – and not because she has become the living incarnation of the pro-life community’s argument against abortion, merely by having lived. Instead, it was for the simple reason that she wants to put a lifetime of “secrets and lies” behind her.

Thornton’s own views on abortion are not so simple. She claims not to identify with either side, revealing that while she chose not to terminate an unplanned pregnancy at the age of 20 – abortion was “not part of who I was” – she has eventually come to the conclusion that religion and politics shouldn’t interfere with a woman’s right to choose.

This is a fitting outcome for the United States of Contradictions, where an implacable partisanship means you have a left who are pro-choice (unless that choice involves COVID-19 vaccinations) and a right who are pro-life, right up until the moment you’re born, and your existence is under daily threat thanks to the gun laws. 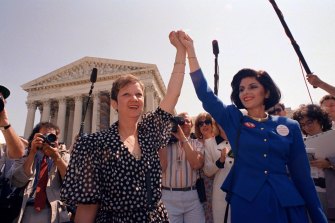 Norma McCorvey, Jane Roe in the 1973 court case, (left) and her attorney Gloria Allred hold hands outside the Supreme Court in Washington in 1989.Credit:AP

In that respect, Thornton now embodies her country’s inconsistencies – which seems both grossly unfair and cruelly ironic. After all, that impersonal embodiment has been her burden from the moment of conception. It was her mother’s burden before that, and it remains the burden of every woman who doesn’t have the right to choose what to do with her own body today. Women shouldn’t have to embody anything aside from their own bodies and minds. Make someone a totem for an ethical or political belief, and they will always fall short.

Norma McCorvey fell short repeatedly during her chequered lifetime. The Louisiana-born daughter of a TV repairman and a violent alcoholic mother, she left home at 15 after allegedly being sexually abused by a family member. At 16, she was married to a man who also abused her, and after having two daughters – both given up for adoption – found herself living on the streets and addicted to drugs and alcohol. At 21, she became pregnant a third time, and because abortion was illegal in Texas, where she lived, went to a backstreet doctor, but was too scared to go through with it. “A lot of women didn’t make it out,” she later said. “They would bleed to death.” 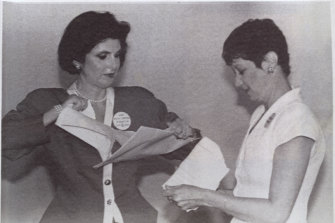 Attorney Gloria Allred (left) and Norma McCorvey, the plaintiff Jane Roe in the US Supreme Court case that legalised abortion, tear up the Justice Department’s brief calling for the reversal of Roe v Wade decision. Credit:Reuters

Desperate, she contacted Dallas adoption attorney Henry Mc-Cluskey, who told her about two lawyers – Sarah Weddington and Linda Coffee – who wanted to represent a woman seeking an abortion in Texas. They took her case, and it went all the way to the Supreme Court, changing the landscape of abortion in America, and miring McCorvey in a battle of ideologies that dogged her until the day she died.

The affairs McCorvey was subsequently revealed to have had with both men and women were seen as problematic for the Left, who would have preferred their pro-choice poster-girl “untarnished”, and proof of anti-Christian values for the right. And as McCorvey doubtless felt increasingly incapable of fitting into any accepted narrative, she began to swing wildly from side to side, working first with pro-choice groups and then, after becoming a born-again Christian in 1995, with the pro-life groups that demanded she publicly renounce her homosexuality.

But there was one last sting in the tail: on her deathbed, McCorvey admitted to receiving at least $US456,911 in “benevolent gifts” from the anti-abortion movement in exchange for her “conversion”. 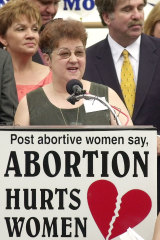 McCorvey addresses a large group of anti-abortion supporters in Dallas in 2003.Credit:AP

“I was the big fish,” she said, in documentary AKA Jane Roe, which came out in 2020. “I took their money and they’d put me out in front of the cameras and tell me what to say. It was all an act. I did it well, too. I am a good actress. Of course, I’m not acting now.”

At 69, McCorvey died just as she’d lived: troubled and unhappy. Surely her daughter, granddaughters and great-granddaughters deserve better? Just as McCorvey never set out to be a pro-choice activist, Thornton should not be reduced to a pawn in a war that looks set to rage on in the US for years – as other states look to impose their own six-week bans and the US Department of Justice filed a civil lawsuit to challenge the Texas law, calling it “clearly unconstitutional”.

It is perhaps little wonder that Thornton has kept her identity a closely guarded secret. It was only after being tracked down by an investigator, hired by McCorvey, in conjunction with a reporter from the National Enquirer, that a teenage Thornton learnt of her connection to Roe v Wade. 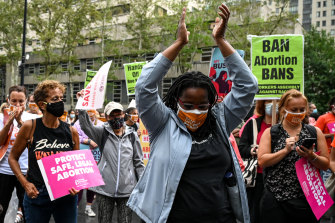 A demonstrator claps during a Planned Parenthood Day of Action Rally in Brooklyn, New York, on September 9, 2021, held in response to new laws restricting abortions in Texas. Credit:Bloomberg

She had always known she was adopted, thanks to the couple – Ruth Schmidt and her husband Billy Thornton – who had taken in the baby girl born at Dallas Osteopathic Hospital on June 2, 1970, at just three days old. By the time Roe was decided, Shelley Lynn was almost three years old and her adoptive parents had no idea of her connection to the landmark case. They split when Thornton was 10, Ruth moving the two of them near to Seattle, and away from alcoholic Billy.

Thornton had just graduated from high school and enrolled in secretarial college, when McCorvey – via the Enquirer – came calling. It led to that heated telephone conversation in 1994, in which Thornton told her biological mother that she would never thank her for not having an abortion. After finding out her identity, Thornton admits in the book that she was “shaking all over and crying”. Schmidt was forced to seek legal help to demand that no identifying information about her adoptive daughter enter the public domain.

From that moment, Thornton will have understood that tidy narratives only exist in fiction. That knowledge will have shaped her and been behind both her brave decision to come forward now and her apparent refusal to make the complex beliefs built up over a lifetime “fit” with either the pro-choice or pro-life communities so intent on claiming her.

Thornton remembers feeling stuck, says Prager: “To come out as the Roe baby would be to lose the life, steady and unremarkable, that she craved. But to remain anonymous would ensure, as her lawyer put it, that ‘the race was on for whoever could get to Shelley first’.”

“What a life,” Schmidt fretted, “always looking over your shoulder.”

And she was. Thornton married her husband, Doug, started their family and gave up her job, partly nervous of being found out. Prager writes, “Every time she got close to someone, Shelley found herself thinking, ‘Yeah, we’re really great friends, but you don’t have a clue who I am.’”

It was only as their children, a son and two daughters, grew up that Thornton began to wonder about her birth mother and two adopted half sisters. She eventually met them, but didn’t manage to reconcile with Norma McCorvey before her death in 2017.

She might have chosen to come forward but there can be little doubting that “Baby Roe” has lost so much. How sad it would be now if she were further torn to pieces by the ferocious abortion debate that rages on in America, in her mother’s name.

Filthy priest caught filming himself having sex on church altar with corset-wearing dominatrices, 41 and 23, cops say