Out go the gunboats! Royal Navy sends four warships into English Channel to warn French trawlers to stay away from British fish as Brexit deal comes into force

The Royal Navy sent four warships into the English Channel to warn French trawlers to stay away from British fish as the Brexit deal came into force.

Hours before the deal took effect on New Year’s Day the boats, armed with cannons and machine guns, left Portsmouth to put a stop to any illegal fishing in UK fishing grounds.

The £100million ship HMS Trent led the mission, flanked by HMS Tamar, HMS Tyne and HMS Mersey – all of which have been assigned to protect the new fishing rights agreed in the trade deal. 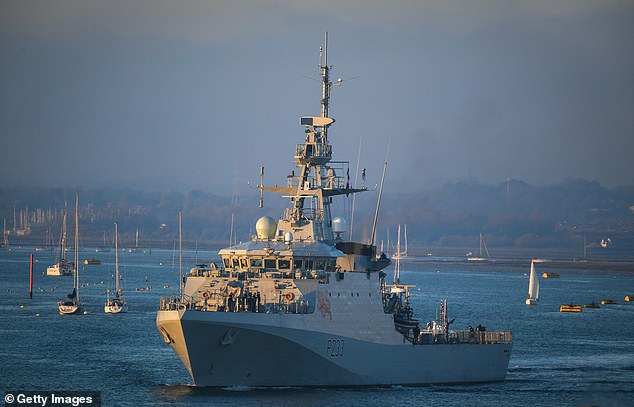 Four Naval ships, including HMS Tamar (pictured leaving Portsmouth on New Year’s Eve), were sent into the English Channel to put a stop to illegal fishing on UK fishing grounds hours before the terms of the new Brexit trade deal came into force 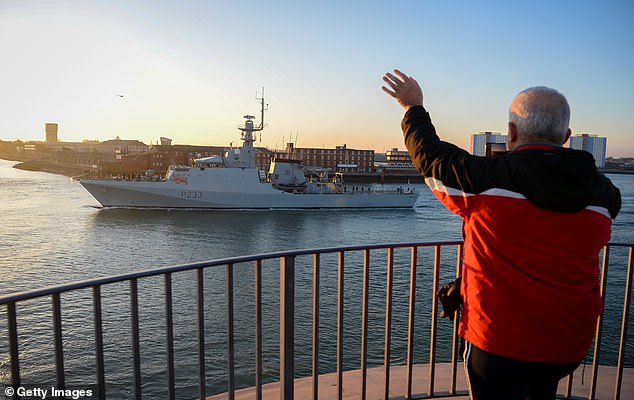 Boats from France and the EU can still fish in British water but over the next five-and-a-half years a quarter of their quota will be handed over to the UK. Pictured: HMS Tamar leaving Portsmouth on New Year’s Eve

HMS Severn was also deployed in the Channel for exercises, The Sun reports.

Under the terms of the Brexit trade deal, boats from France and the rest of the EU can still fish in British water but over the next five-and-a-half years a quarter of their quota will be handed over to the UK.

Talk of naval vessels being dispatched to deal with any clashed in fishing grounds if a trade deal was not agreed with the EU were floated in the run up to New Year’s Day and, despite reaching a settlement, the boats still left Portsmouth at the end of 2020.

Earlier this month there were fears the deployment of ships would evoke memories of the Cod Wars of the 1970s – at times the Royal Navy stopped Icelandic boats interfering with British trawlers. 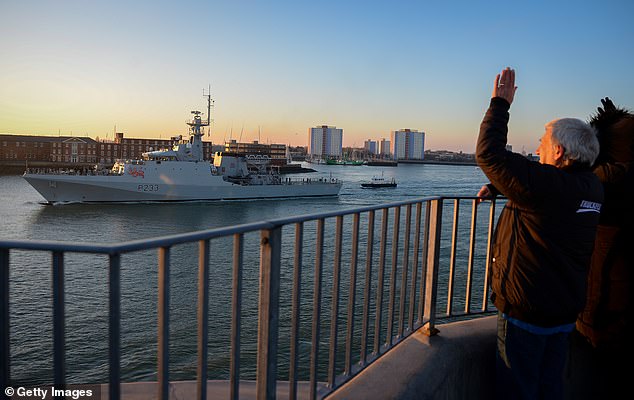 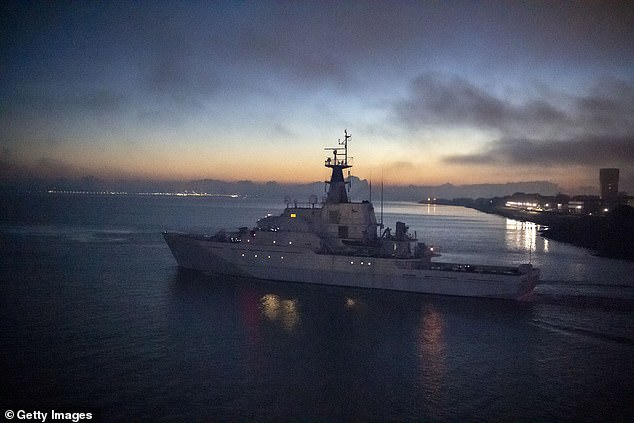 Former head of the Navy Admiral Lord West of Spithead said the decision to send boats into the channel was ‘an act of deterrence’ and should be seen as a signal that the UK is taking responsibility for its waters.

The Sun reported a defence source said: ‘The plan was to have two offshore patrol vessels at sea and two in port and rotate them.

‘But for day one of Brexit, the commanders wanted all four ships at sea as a show of resolve.’

A spokesman for the Military of Defence confirmed the four boats had left Portsmouth on New Year’s Eve ‘to carry out routine activity’.

Mr Gove warned in October that the Navy would be patrolling British waters in the days after the transition period. The Cabinet Office minister said they would ‘make sure no one is abusing their rights when it comes to access to our fishing waters’.

Fishing quotas had been a significant stumbling block in the UK’s negotiations with the European Union, with French President Emmanuel Macron refusing to budge, insisting he was unwilling to ‘give up my share of the cake’.

The two sides were bitterly divided over how much access EU fleets should continue to have to British waters.

Earlier this month the EU suggested it should continue to enjoy the same access as it does now for at least another year – even if no trade deal was reached – an idea which was rejected by UK ministers.

The Ministry of Defence spent months drawing up contingency plans for a number of outcomes at the end of the transition period on December 31 amid fears a No Deal result could have lead to clashes between rival boats.

It is understood the plans would have see two Batch 1 vessels and two Batch 2 vessels, which are almost 300ft in length and weigh 2,000 tons, deployed.

A government source said the boats would be on hand to support border force and step in if boats in UK waters refused to leave. They were expected to also inspect vessels if needed.

Some UK Labour lawmakers to quit party over Brexit: source