A Russian actress and a film director returned to Earth today after spending 12 days on the International Space Station (ISS) shooting scenes for the first movie in orbit.

Yulia Peresild and Klim Shipenko landed as scheduled on Kazakhstan’s steppe at 04:36 GMT, according to footage broadcast live by the Russian space agency.

They were ferried back to terra firma by cosmonaut Oleg Novitsky, who had been on the space station for the past six months. 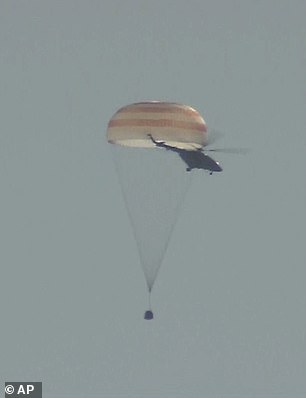 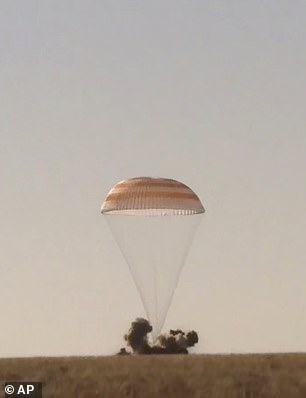 The capsule, descending under a red-and-white striped parachute after entering Earth’s atmosphere, landed upright in the steppes of Kazakhstan early Sunday morning 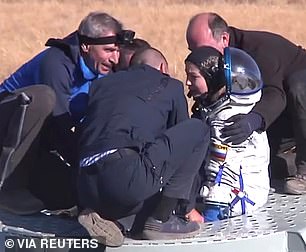 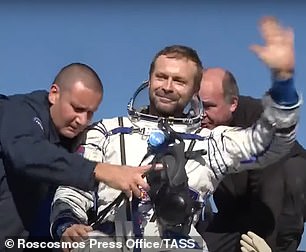 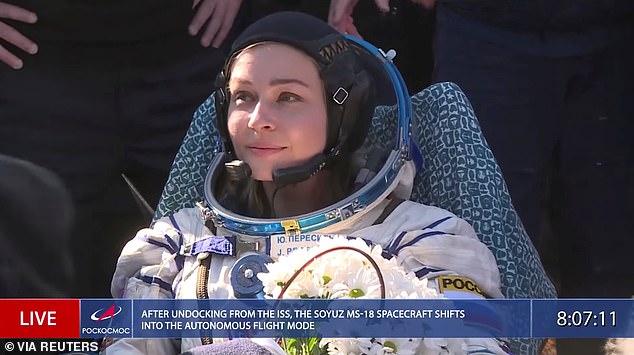 Peresild, pictured holding a bouquet of white flowers, told journalists she felt saddened the once-in-a-lifetime trip was over

‘The descent vehicle of the crewed spacecraft Soyuz MS-18 is standing upright and is secure. The crew are feeling good!’ Russian space agency Roscosmos tweeted.

Peresild smiled and held a large bouquet of white flowers as journalists clustered around her, though said she felt sad the expedition is over.

‘It seemed that 12 days would be a lot, but I did not want to leave when everything was over,’ she said.

The filmmakers had blasted off from the Russia-leased Baikonur Cosmodrome in ex-Soviet Kazakhstan earlier this month, travelling to the ISS with veteran cosmonaut Anton Shkaplerov to film scenes for ‘The Challenge’.

If the project stays on track, the Russian crew will beat a Hollywood project announced last year by ‘Mission Impossible’ star Tom Cruise together with NASA and Elon Musk’s SpaceX.

The movie’s plot, which has been mostly kept under wraps along with its budget, centres around a surgeon who is dispatched to the ISS to save a cosmonaut.

Shkaplerov, 49, along with the two Russian cosmonauts who were already aboard the ISS are said to have cameo roles in the film.

Novitskiy, who transported the two filmmakers back to Earth, is to appear in the movie as the ailing cosmonaut requiring emergency surgery.

The mission was not without small hitches.

As the film crew docked at the ISS earlier this month, Shkaplerov had to switch to manual control. 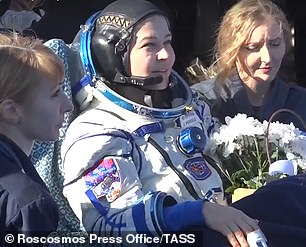 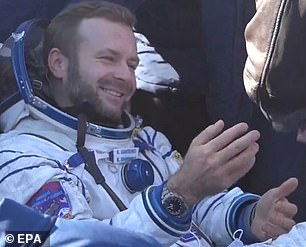 After 12 days on the ISS filming, Peresild (left) and Shipenko (right) give a press conference about their time in orbit and their return journey 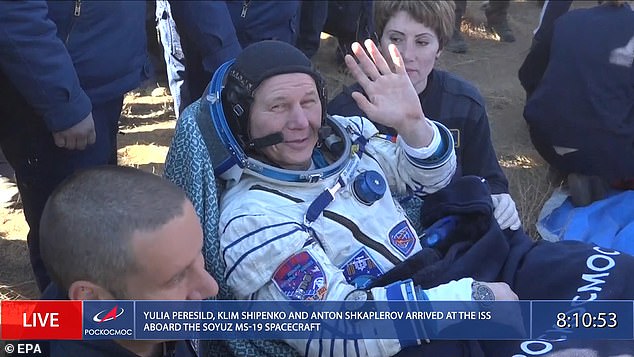 Cosmonaut Oleg Novitsky (pictured) waves at the camera, having successfully ferried the two filmmakers back to Earth with him following his own personal six-month stint at the ISS

Peresild (left), Novitsky (middle) and Shipenko (right) are surrounded by the land crew who greeted them upon their landing in the steppes of Kazakhstan

And when Russian flight controllers on Friday conducted a test on the Soyuz MS-18 spacecraft the ship’s thruster fired unexpectedly and destabilised the ISS for 30 minutes, a NASA spokesman told the Russian news agency TASS.

But the spokesman confirmed their departure would go ahead as scheduled.

Their landing, which was documented by a film crew, will also feature in the movie, Konstantin Ernst, the head of the Kremlin-friendly Channel One TV network and a co-producer of ‘The Challenge’, told AFP.

The mission will add to a long list of firsts for Russia’s space industry.

The Soviets launched the first satellite Sputnik, and sent into orbit the first animal, a dog named Laika, the first man, Yuri Gagarin and the first woman, Valentina Tereshkova.

But compared with the Soviet era, modern Russia has struggled to innovate and its space industry is fighting to secure state funding with the Kremlin prioritising military spending.

Its space agency is still reliant on Soviet-designed technology and has faced a number of setbacks, including corruption scandals and botched launches.

Russia is also falling behind in the global space race, facing tough competition from the United States and China, with Beijing showing growing ambitions in the industry. 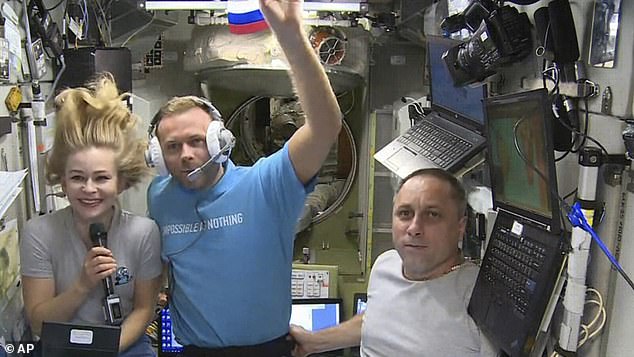 Peresild (left), Shipenko (centre) and Novitsky (right) on the ISS, where they filmed scenes from upcoming movie ‘The Challenge’, in which cosmonaut Novitsky will cameo as a spaceman in need of emergency surgery 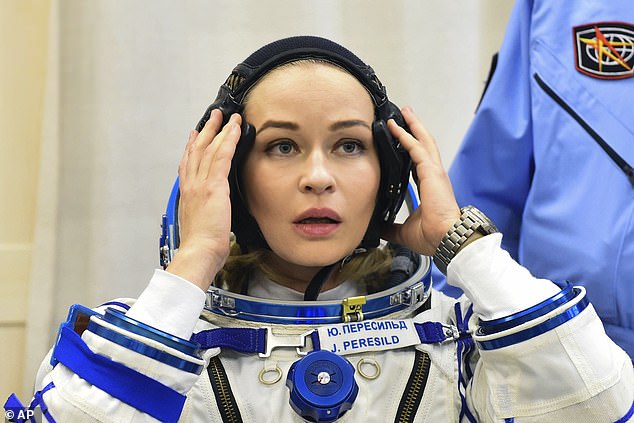 Peresild, 5 October, prior to launching en route to the ISS, where she played a surgeon shot off into space to adminster emergency treatment to an ailing cosmonaut

Russia’s Roscosmos was also dealt a blow after SpaceX last year successfully delivered astronauts to the ISS, ending Moscow’s monopoly for journeys to the orbital station.

In a bid to spruce up its image and diversify its revenue, Russia’s space programme revealed this year that it will be reviving its tourism plan to ferry fee-paying adventurers to the ISS.

After a decade-long pause, Russia will send two Japanese tourists – including billionaire Yusaku Maezawa – to the ISS in December, capping a year that has been a milestone for amateur space travel.

Nine graphs to explain Victoria’s record debt, deficit and just what it will cost