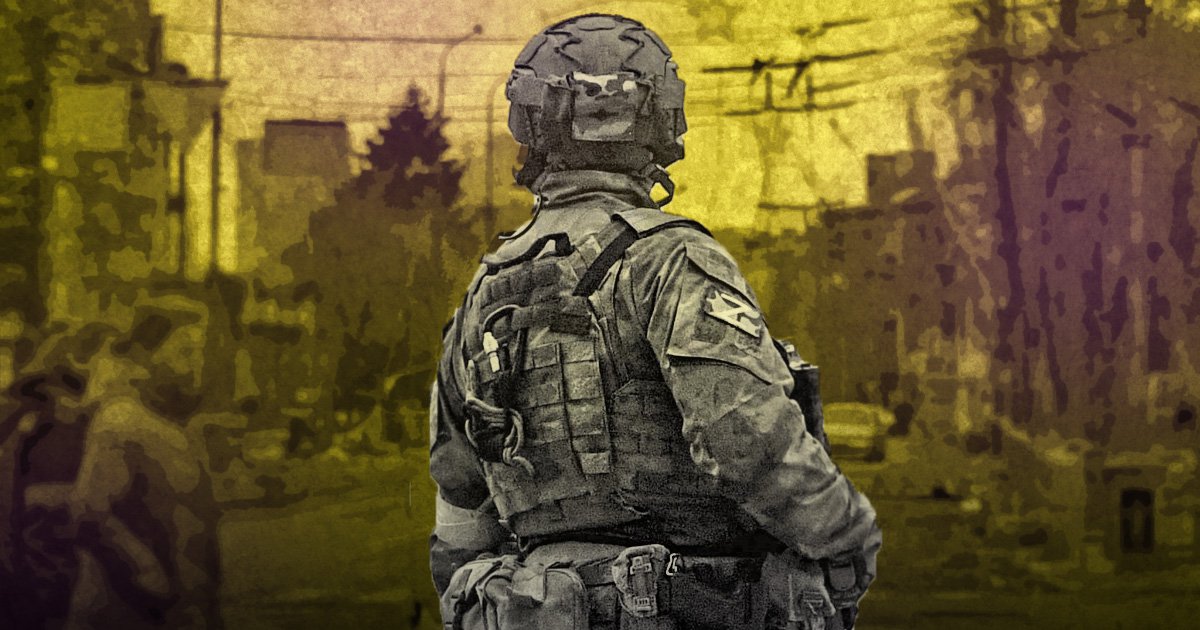 Troops in Ukraine have been using rape as a weapon to terrorise Ukrainian communities, sexual violence activists have said.

Since Vladimir Putin invaded on February 24, multiple reports have come out about his troops allegedly assaulting women, men, the elderly and even children.

Experts have now told Metro.co.uk these rapes are not ‘randomised, individual, opportunistic acts’ but part of a Russian ‘strategy of terror to instil fear’ instead.

Katrien Coppens is the executive director of the Mukwege Foundation – a group advocating for the rights of victims of sexual violence in conflict.

She, along with colleagues from her partner organisation the Global Survivors Fund (GSF), were invited to Ukraine in the last week of April.

They spoke to survivors, local authorities and charities on the ground before concluding there is ‘at least a clear indication, if not evidence, that the Russian hierarchy is not only failing to act [on the rape of Ukrainians] but supporting it’.

Both Katrien and the GSF’s Esther Dingemans described rapes being committed in public – often a common indicator that the assault is designed to scare and traumatise the victim’s family members and wider community as well. 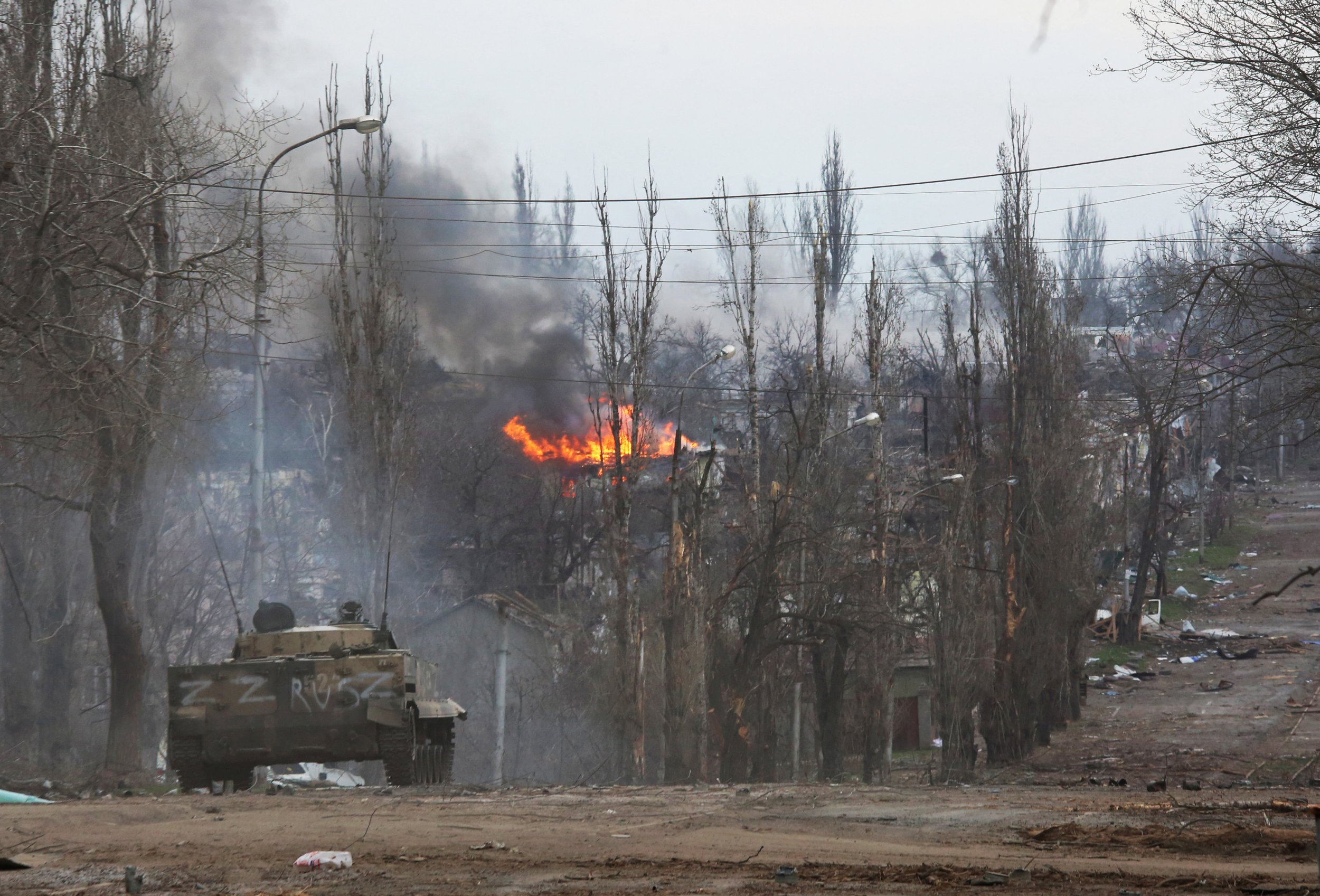 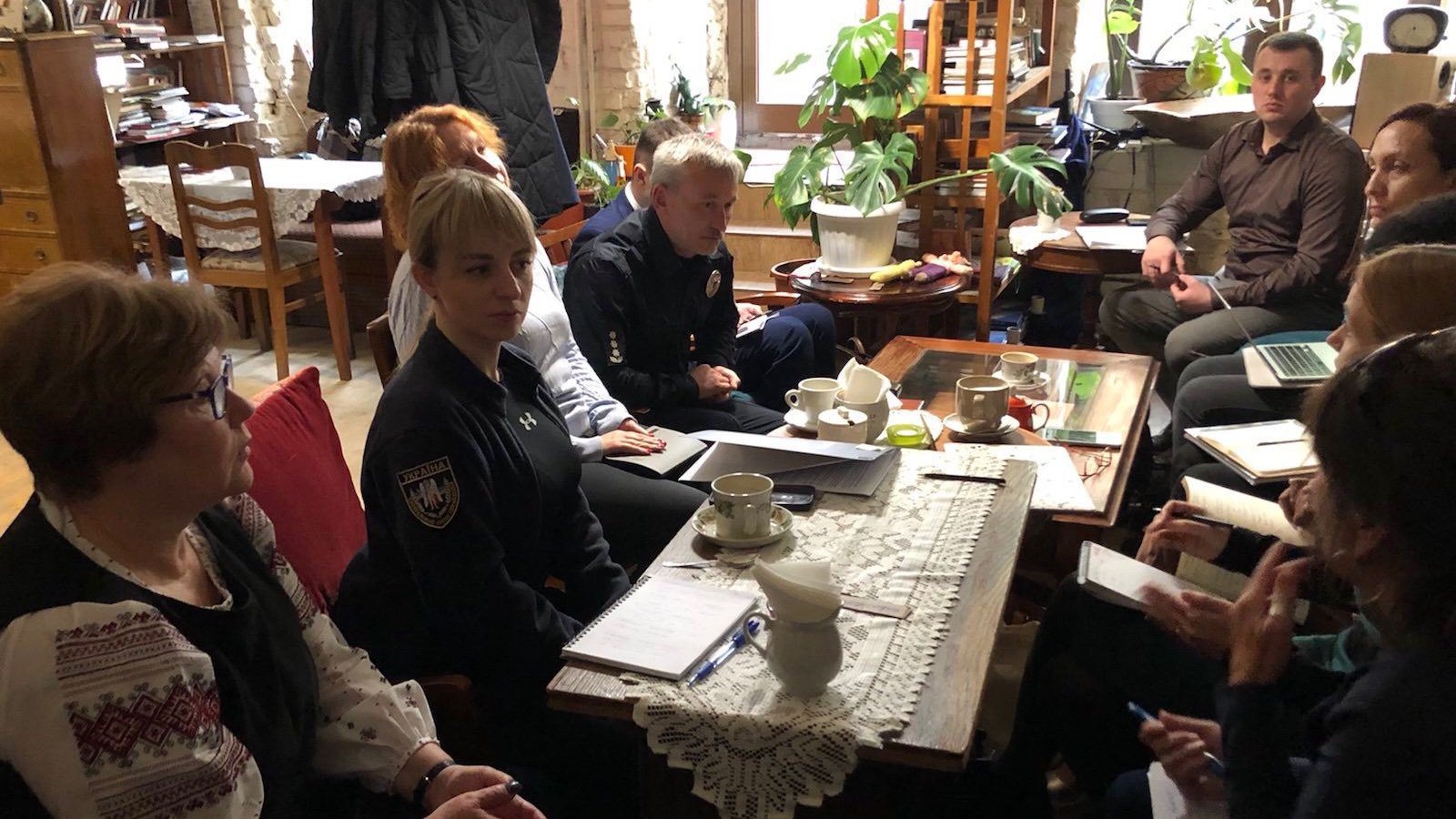 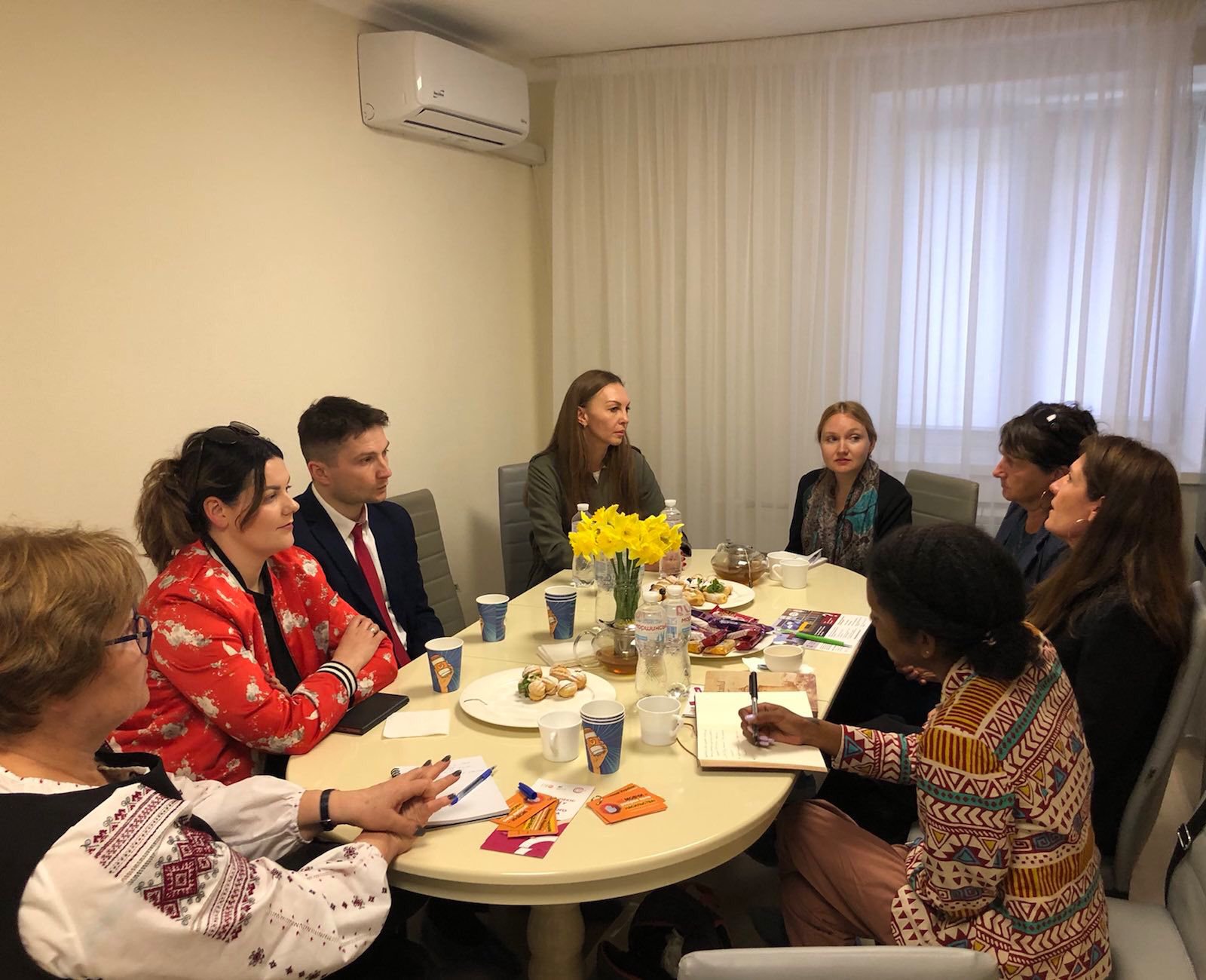 Esther said: ‘At that moment, the perpetrators want to cause as much harm as possible, like with another weapon – with a nuclear weapon you use it because it creates a huge impact.’

Women also said they were subject to repeated sexual abuse for prolonged periods of time – usually for the entire duration of a Russian occupation.

Katrien said: ‘There are stories of Russian soldiers going from door-to-door to look for girls and women in occupied areas. In those areas, women and girls often sleep in the forests to hide.’

Both young girls and boys have allegedly been victims too. Katrien and Esther were told about a girl as young as nine being raped.

Elsewhere, a Russian soldier has been arrested for allegedly raping a baby, while a 14-year-old girl who was raped by five men in Bucha is now pregnant.

Many of the stories the activists heard were about gang rapes – ‘several perpetrators, one after the other on the same day’.

What makes rape a weapon?

Legally and academically, sexual violence is considered to be a weapon of war when it can be proven there is an intention to use it as a military strategy and when their have been instructions given by the higher-ups in the armed forces.

Katrien, Esther and several other activists argue the sexual violence in Ukraine meets these standards.

Katrien said: ‘There are so many stories coming out but we have no indication that the Russian high command or the hierarchy is taking any action about it.

‘If it was a randomised act, you would expect that the Russian hierarchy would condemn it and launch an investigation.

‘But on the contrary, the military troops that were in Bucha – where there has been a lot of reports of mass violence against civilians, including sexual violence – have received medals of honour upon their return.’

The Russian soldiers who occupied the commuter town of Bucha from March 4 to 31 have been accused of committing massacres, mutilating children, ‘booby-trapping’ civilians and then leaving them to die, along with multiple rapes.

In one example, about 25 women, between the ages of 14 and 24, were allegedly raped in a basement in Bucha. 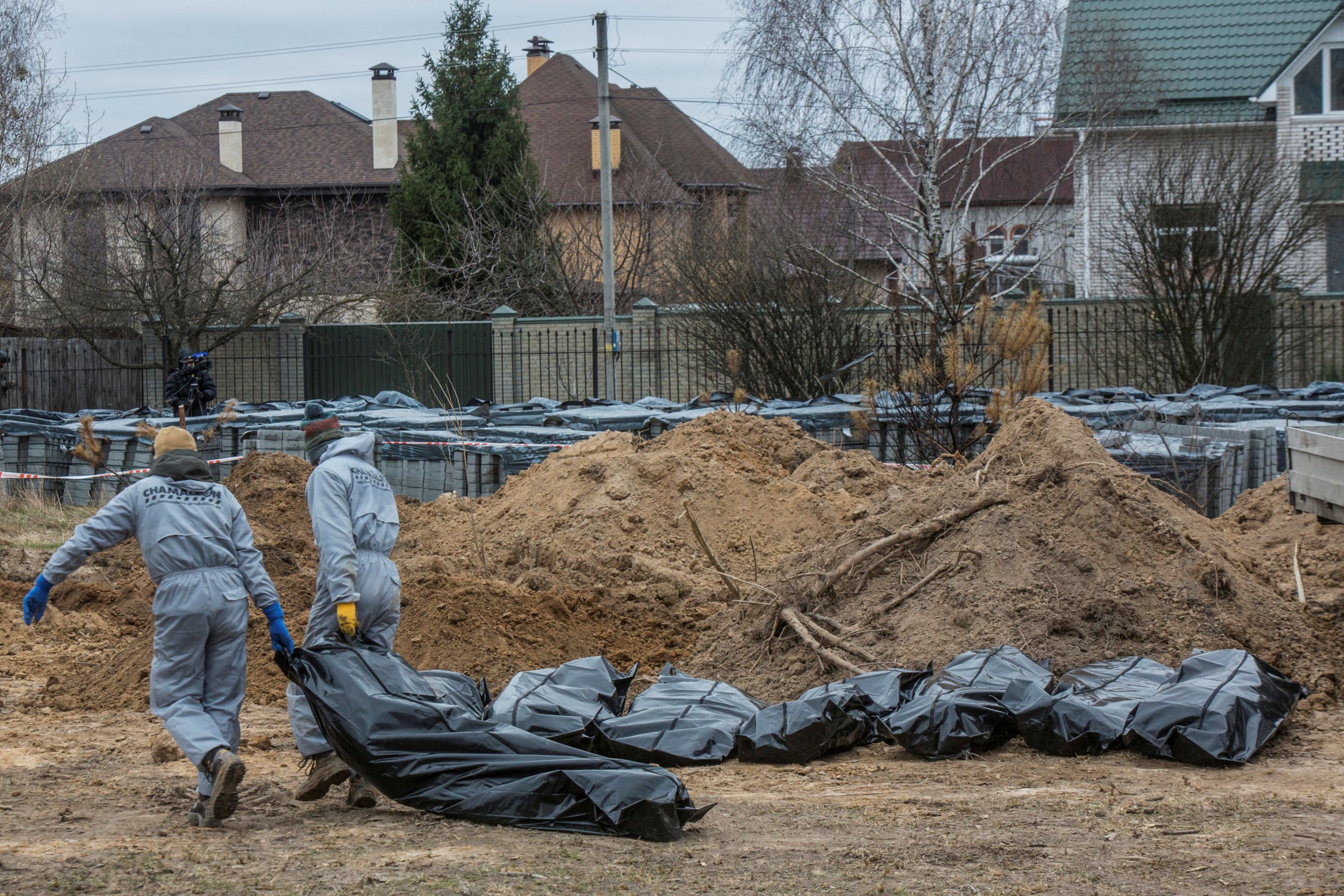 Ukraine’s ombudsman for human rights, Lyudmyla Denisova, claims the victims were told they were being raped so they would never want to have sex again and would never have Ukrainian children. Nine of them are now pregnant.

The group that occupied Bucha, known as the 64th Brigade, was honoured by Putin when they returned home to Russia, with the Kremlin praising their ‘mass heroism and valour’.

But whether this proves the rapes were commanded or not is ‘irrelevant’, Esther argued.

She said: ‘To me, it’s more important to look at what the violence looks like for the victim to experience.

‘In Tigray, Ethiopia, a child was raped and her father was tied to a chair and forced to watch it.

‘Whether there is an order or not for that father and that child – that is experiencing mass destruction of everything they have in that moment.’

What can we do about it?

‘We really need to step up our response to rape in war, getting the outcry that it deserves is the least we can do,’ Esther said.

She told Metro.co.uk: ‘I think collectively, human beings believe in “all’s fair in love and war”. And all should not be fair – either in love or in war.

‘It’s pervasive – I mean almost no conflict happens without a large scale torturing of the women.’

The Mukwege Foundation and the GSF believe reparations should be used to help survivors more.

But most reparation systems are linked to a perpetrator being prosecuted and found guilty.

This is very difficult to do – for all the same reasons peacetime sexual violence has such low conviction rates – but also because wartime victims seldom even know their rapists’ names. 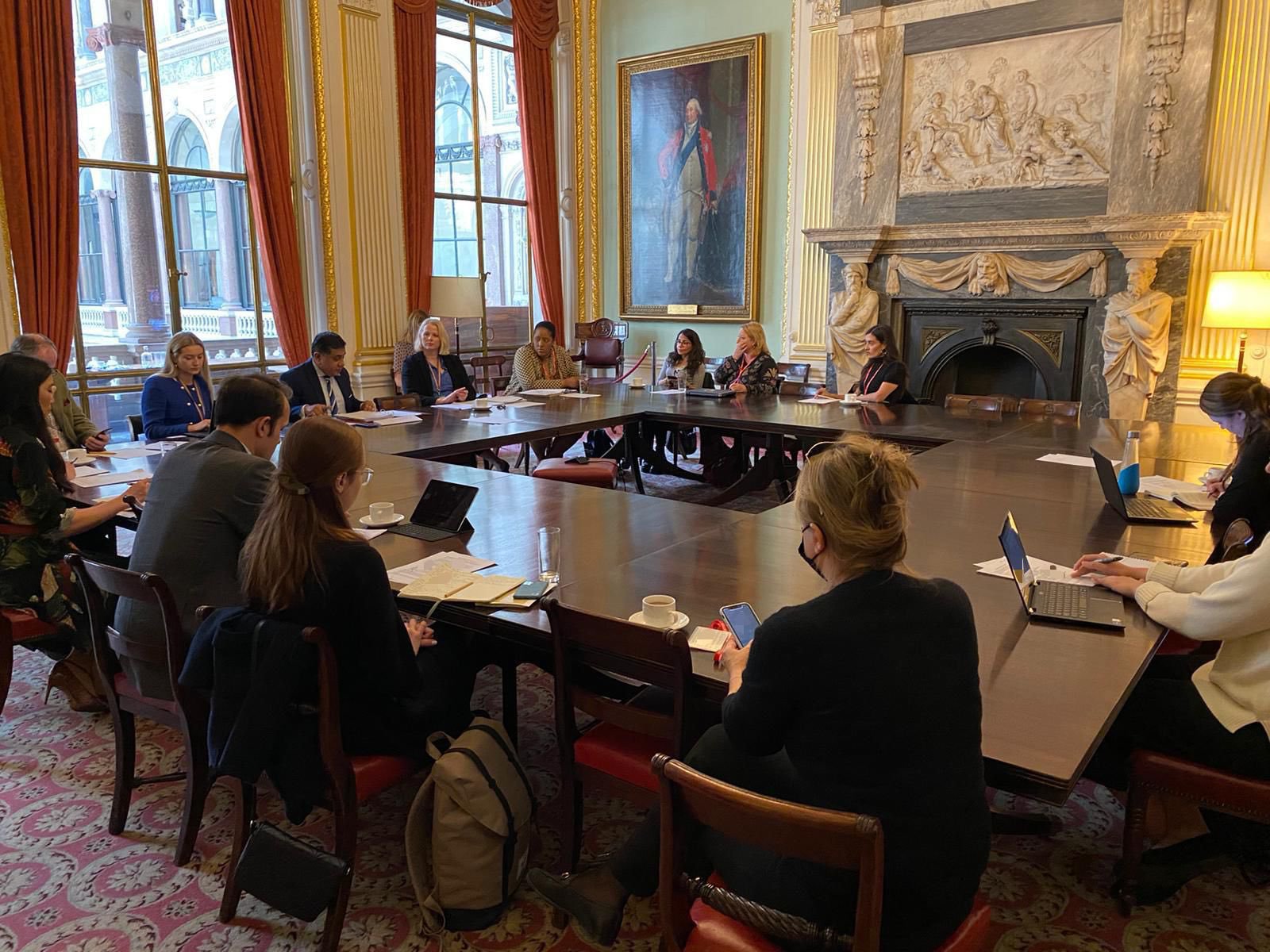 When perpetrators come from a different nation, as is the case in the Ukraine war, they will likely have returned to their home country by the time any investigations or trials take place.

Katrien said: ‘And that’s why it’s very important that the notion of reparation and compensation is delinked from convictions.’

Reparations and compensation can take many forms and the Mukwege Foundation and the GSF makes a point of asking survivors what they want.

For example, both organisations spoke of a woman who was raped in front of her children in her home during the Kosovo war in 1999.

She cannot afford to move house so she has to look at the room where she was violated every day. Reparations would see her given the money to move.

Esther said: ‘I think we need to really understand and really see the gravity of this. We need to see that this is not about incidents, it is about destruction.

‘We need to investigate patterns, investigate the long-lasting harm and come with the same outcry as we have for other weapons – like nuclear weapons.

‘And that outcry needs to come with serious investment in victims’ rights to care and long-term reparations.’

What happens next about Ukraine?

The International Criminal Court in The Hague announced it would investigate Russian troops for war crimes, including sexual violence, in February.

Investigators will include at least six people who specialise in gender-based attacks as crimes of war.

Katrien said: ‘[Any future trials] will be disappointing for many survivors, as there will only be a very small number of people who see trial, but I think the chances of [justice] are bigger now than they’ve ever been.’

Karim Khan, who is heading the investigation, said: ‘I can’t promise anything — I’m a prosecutor.

‘All I can promise is ethics, hard work, integrity, following the evidence and trying to use imaginative and creative ways to ensure that justice is not a phantom.’

One dead, four injured in ‘suspicious’ incident in Queens