Aboriginal Victoria is investigating the destruction of part of an ancient Indigenous ceremonial and cultural site in western Victoria after a landowner allegedly removed a significant portion of carefully arranged stones, claiming the area was becoming a fire hazard.

The Kuyang Stone Arrangement near the town of Lake Bolac, 200 kilometres west of Melbourne, is an Aboriginal cultural landmark composed of two lines of stones depicting the life-cycle of an eel. 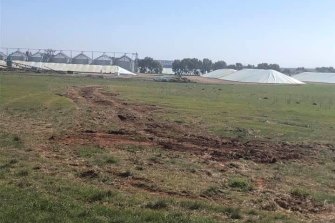 Part of the Kuyang Stone Arrangement near Lake Bolac in western Victoria were removed in recent days.Credit:Neil Murray

The 176-metre-long structure curves across the landscape and is believed to have been created more than 1500 years ago.

It is well-documented as a highly significant Aboriginal place and is registered with state government agency Aboriginal Victoria under the Aboriginal Heritage Act.
The act puts some limits on interactions with the land and interference with the site.

Aboriginal elders visited the site on Tuesday afternoon to survey the damage to a significant portion of the arrangement.

Eastern Maar Aboriginal Corporation cultural heritage adviser John Clarke said he was heartbroken when he first arrived at the site and shed a tear over the destruction he found. 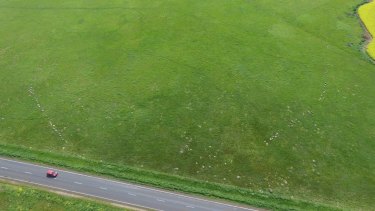 The Kuyang Stone Arrangement, captured from above by a drone.Credit:Neil Murray

“The Aboriginal community is really concerned about what has occurred. It’s sad, traumatic, it certainly has a bearing upon members of our community.”

A Kirrea-Whuurrung man, Mr Clarke said there was some angst among community members that the protections afforded under the heritage act were inadequate and enforcement for alleged breaches was lacking.

“There are concerns there haven’t been many prosecutions since the inception of the current act,” Mr Clarke said.

“There have only been four prosecutions and that, I think, with the amount of reports made to Aboriginal Victoria annually relating to possible harm [to indigenous sites], there is general concern amongst traditional owners that the number of prosecutions could be a little light on.”

An Aboriginal Victoria spokeswoman said the agency was aware of allegations of harm to the Kuyang Stone Arrangement and was working with the Eastern Maar Aboriginal Corporation to investigate.

“It is an offence to cause harm to Aboriginal cultural heritage under the Aboriginal Heritage Act and substantial penalties can apply,” the spokeswoman said.

Penalties for deliberate, reckless or negligent breaches of the act include fines of up to $297,396 for individuals. It is not yet known whether the landowner’s actions fall within those categories.

Transport Infrastructure Minister Jacinta Allan acknowledged it was a distressing incident for local Indigenous community, and said there would be a thorough investigation at the site.

“Particularly in this part of western Victoria, there are some remarkable Aboriginal heritage sites … that are tens of thousands of years old, that are an important part of our cultural history,” she said on Tuesday.

Musician Neil Murray, who grew up in the area, noticed that many of the stones appeared to have been moved when he drove past the site on Sunday morning. He said he was “devastated” by the destruction.

“It’s not formally protected, it was an informal understanding with the previous landholder,” Mr Murray told The Age.

“It’s widely known throughout the community, but it isn’t a tourist attraction.”

“How the old ones managed to construct such a beautiful and perfectly curved ellipse from the ground is an added marvel to the Kuyang stone’s deep esoteric meaning.”

The landowner, Adrian McMaster, said he had moved the stones to prevent the paddock from becoming a fire hazard.

“If you’d been here six or seven months ago you couldn’t have seen the stones, the grass was that high,” Mr McMaster told The Courier.

“My uncle got some sheep in to get the grass down, because it was a fire issue; it was a danger to the community; it was fence-high. And then we wanted to get a (boom) sprayer in there, because the thistles were so bad, and we needed to have it clear. So I had to get them out of the way.

“No one has ever approached me to measure out where the stones were. There are no markers or anything like that. Having a fire here would be disastrous; there are (grain) bunkers everywhere and they’d be wiped out.”

Rodney Carter, who chairs the Victorian Aboriginal Heritage Council said Indigenous communities experienced significant grief at the destruction of significant cultural sites, compounded by the fact that they were often closed to traditional owners.

“In this instance, a significant cultural site that is already inaccessible to traditional owners for cultural use is also unable to be protected through registration on the Victorian Aboriginal Heritage Register,” he said.

“One such failing is the lack of capacity to identify cultural sites or ancestral remains that are on private property.”

CDC forecasts COVID death toll to hit 233,000 by the end of the month

Son of Falklands hero is among pallbearers carrying Philip's coffin