During the same-sex marriage plebiscite in 2017, a group of students at a northern Melbourne secondary school tore down posters advertising a no-uniform day during Pride Week and replaced them with posters reading “wear black for the straights”.

Natalie, who chose not to use her last name, was in year 11 at the time and had recently come out as bisexual. 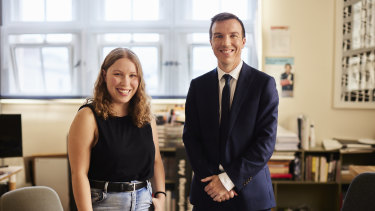 Natalie and her former vice-principal Colin Burke are working together on the Speaking Up Speaks Volumes campaign.

“People used [the plebiscite] as an opportunity for anti-yes rhetoric and things became quite awful,” she said.

“But the teachers really rallied together to support us students.

“They were amazing and made me feel so much safer at school to know those people in power had my back.”

Colin Burke was vice-principal of the school at the time. He said the posters incident devastated the school community.

“[They] made me feel so much safer at school to know those people in power had my back.”

“It was heartbreaking on a lot of levels,” he said.

“When you know and you work with kids every single day that are same-sex attracted and you see the impact that negativity has on their health and wellbeing on a day-in day-out basis, you have to act and you have to speak up and support them.”

The pair have shared their story as part of the new Speaking Up Speaks Volumes campaign, which aims to improve the mental health and wellbeing of LGBTIQ+ people by encouraging families, friends, colleagues, peers and the wider community to speak up as an ally and against discrimination.

Mr Burke said allyship was especially important for school leaders as he didn’t realise until much later how important his vocal support had been for his vulnerable students.

“I felt like that was the right thing to do at the time but I hadn’t realised until some time later talking to Natalie how important it was from her perspective to have someone in my position speak up on her behalf,” he said.

Without support, young people who are LGBTIQ+ are five times more likely to attempt suicide.

Chris Carter, chief executive of North Western Melbourne Primary Health Network, which created the campaign, said the importance of speaking up as an ally for LGBTIQ+ friends – particularly during vulnerable school years – was crucial.

“A safe schooling experience is something that every child deserves and there is no place for hurtful, disrespectful or discriminatory behaviour,” he said.

“The simple act of openly showing support can be a catalyst for great change for the better and it’s often the less obvious moments that can be the most impactful to someone’s wellbeing.

“When someone is experiencing bullying, silence often feels like indifference, which can create a terrible sense of isolation.”

Increasing acceptance and awareness of LGBTIQ+ issues has been a long-term project in schools. The Victorian government launched Safe Schools in 2010 to ensure schools were free from danger and discrimination.

Natalie says a key way for schools to support LGBTIQ+ students is to be led by them.

“I would say the best way to support your queer students is directly have conversations with them in a safe space and ask them for what they need from you,” she said.

“And do your best to make that allyship public, because allyship no one is seeing isn’t really active allyship.”

Did Boris Johnson take us for fuels with big fat VAT lie?