Officials at Department of Education say schools in England are in such a state of disrepair that they are a ‘risk to life’, leaked documents reveal

Many of England’s school buildings are in such a bad state that they have been deemed a ‘risk to life’, senior officials have warned.

Those working for education secretary Nadhim Zahawi have warned that the current pace of 50 school rebuilding projects per year needs to be upped to more than 300.

They have called upon the Treasury to make £13billion available to make this happen, as well as having emailed Downing Street to raise the alarm on two occasions in the last six weeks.

According to documents leaked to the Observer, an email from the Department for Education as part of a weekly update to No 10 on 30 March told of how the ‘crumbling’ school buildings were considered an ‘upcoming risk’.

It read: ‘School buildings: the deteriorating condition of the school estate continues to be a risk, with condition funding flat for financial year 2022-23, some sites a risk-to-life, too many costly and energy-inefficient repairs rather than rebuilds, and rebuild demand x3 supply. 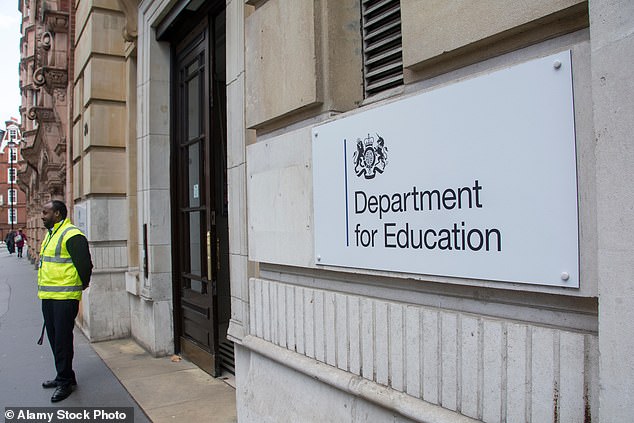 Many of England’s school buildings are in such a bad state that they have been deemed a ‘risk to life’, with senior officials warning that the current pace of 50 rebuilding projects must be upped to more than 300. Pictured, the Department for Education building in London

‘Department for Education continues to engage Her Majesty’s Treasury to expand the School Rebuilding Programme by a similar amount, as discussed in Spending Review negotiations.

‘This includes increasing the number of School Rebuilding Programme projects a year from 50, to over 300.’

The same email also states that the Department for Education is ‘battling’ with the Treasury for £13billion to spend on school building repairs. The billions were made available as a result of recent reforms to higher education.

The second alarm was raised on 4 April when the same warnings of the schools being a ‘risk to life’ were repeated, also asking to increase the scale of the school rebuilding scheme.

Downing Street and the Treasury are already facing huge amounts of pressure to help those on lower incomes manage the cost-of-living crisis – and now are being called to divert billions to prevent schools from falling down.

He said the current range of problems were from dangerous roofing to potentially-life-threatening asbestos.

He told the Observer: ‘All children deserve to learn in high quality, safe and comfortable buildings. But in 2022-23, capital funding is £1.9bn less per year in real terms than it was in the last years of the Labour government.

‘If the government had not cut Labour’s school rebuilding programme, £27bn more would have been spent on school and college buildings. So, while any money spent on school buildings is welcome, the scale needs to be judged against what has been cut, which is 50 times larger.’

The Department for Education noted that if a school estate is ever in such a condition that it puts children at risk, it is immediately closed to pupils with urgent work carried out. It has completed three surveys of school buildings since 2012.

A spokesperson for the Department for Education told MailOnline: ‘The safety of pupils and staff is paramount. We have one of the largest and most comprehensive estate condition data collection in Europe, and this allows us to assess and manage risk in our buildings. 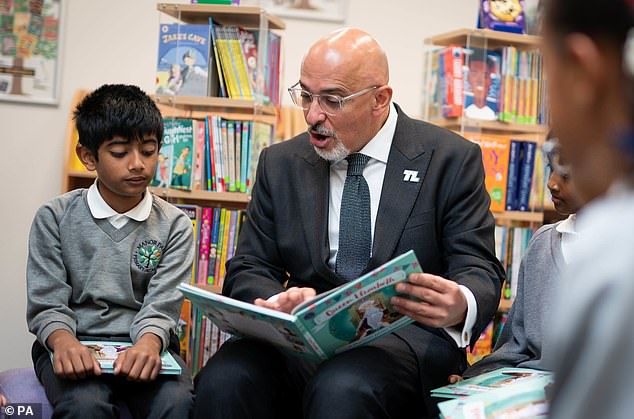 Downing Street and the Treasury are already facing huge amounts of pressure to help those on lower incomes manage the cost-of-living crisis – and now are being called to divert billions to prevent schools from falling down. Pictured, Education Secretary Nadhim Zahawi at Manor Park Primary School in Sutton on 13 May

‘We prioritise buildings where there is a risk to health and safety and have invested £11.3 billion since 2015 to improve the condition of school buildings and facilities.

‘In addition, our new School Rebuilding Programme will transform the learning environment at 500 schools over the next decade.’

The Guardian reported in 2019 that one in six schools in England required ‘urgent repair’, with warnings of schools ‘crumbling around’ its teachers and pupils.

At the time, data showed that 1,313 schools, out of 21,796 which released information, had elements considered to be in the ‘worst possible condition’ which is defined as ‘life expired and or serious risk of imminent failure’, listed as Grade D.

LTNs blamed for delays to thousands of fire engines London