New York: Hurricane Sally has reached landfall on Wednesday near Alabama in south eastern United States as a category 2 hurricane, bringing with it the risks of catastrophic flooding.

"This is a LIFE-THREATENING SITUATION. SEEK HIGHER GROUND NOW!!," the National Weather Service office in Mobile, Alabama, warned in a tweet. 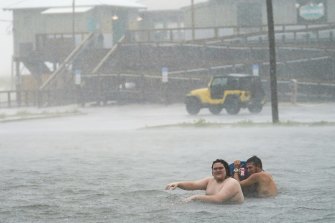 The relative calm before the storm: People play in a flooded parking lot at Navarre Beach in Florida.Credit:AP

The extent of the damage would not be clear until daybreak, but videos from Pensacola Beach, Florida, showed storm surge pushing seawater into residential streets and parks. According to the National Weather Service, a casino barge near Coden, Alabama, broke loose because of strong winds and storm surge and slammed into a dock.

In recent days, the storm's projected point of landfall has veered by nearly 300km. It had once been expected to rake over the remote, low-lying areas of south eastern Louisiana and possibly reach beyond the New Orleans metropolitan area, but the latest projections show Sally clipping the south east corner of Mississippi as it bears down on Alabama and the Florida Panhandle.

"I'm well aware that those on the Gulf Coast are all too familiar with Mother Nature's wrath," Governor Kay Ivey of Alabama said on Tuesday. 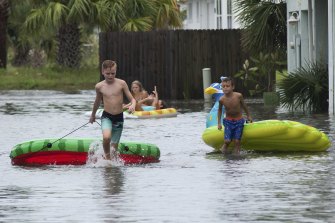 Youngsters turn the flooded parking lot of the Bahia-Paz apartments into a water park this week in Pensacola Beach, Florida.Credit:AP

"We still hope and pray Sally will not bring that type of pain and heartache, but my fellow Alabamians, Hurricane Sally is not to be taken for granted."

A hurricane warning remained in effect for an area stretching from Bay St. Louis city, Mississippi, near the Louisiana border, to Navarre, near the tip of the Florida Panhandle.

Still recovering from Hurricane Laura and bracing for Hurricane Sally, residents along the Gulf Coast and the eastern seaboard warily watched reports of other major storms developing in the Atlantic.

The hurricane season has been among the most active on record, with 20 named storms so far. Along with the wildfires that have devastated the West Coast, scientists see the twin crises as yet more effects of climate change, which threatens to reshape the US.

Our weekly newsletter will deliver expert analysis of the race to the White House from our US correspondent Matthew Knott. Sign up for the Herald‘s newsletter here, The Age‘s here, Brisbane Times‘ here and WAtoday‘s here.