The NSW union movement has thrown its support behind moving public service jobs to the regions in an unusual alignment of Labor's support base with a long-term priority of the Nationals.

Rising automation in farming and manufacturing spurred Unions NSW, the state's peak trade union body, to make the call for the government to encourage public servants to move to rural areas with cash grants for relocation costs and rent subsidies. 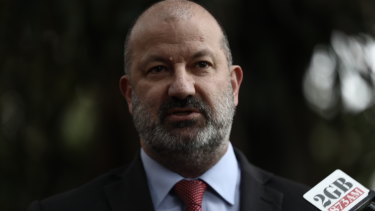 In a submission to a NSW parliamentary inquiry on the future of work, the unions argue relocating bureaucrats could help make up for the job losses caused by farms monitoring crops with machines and regional businesses pushing customers to internet services such as online banking.

"Push [public servants] out into the regions, generate jobs and cash flow in those areas," urged Mark Morey, the secretary of Unions NSW. "That's something the state government can do in those areas."

There were almost 340,000 full time equivalent public service jobs in NSW last year and Mr Morey said "as many as possible" should move to regional areas. Their spending would stimulate local economies, he said.

Asked about the unions' proposal, NSW Deputy Premier and state Nationals leader John Barilaro pointed to his own move, announced earlier in the year, to create four offices for his Department of Regional NSW in Queanbeyan, Coffs Harbour, Armidale and Dubbo, each with up to 100 staff.

He said that would "create more jobs for regional communities, support local economies and industry growth and ensure more people are working in the areas that they are supporting".

Mr Morey said he had not spoken with the government about the unions' plan, accusing it of "fighting about Koalas" rather than giving jobs its priority, but he said "it would be good to have [the Nationals] support on this sort of stuff".

Unlike at a federal level where unions and businesses are discussing industrial reform with Attorney-General Christian Porter, Mr Morey has been a persistent critic of the Berejiklian government, particularly over its moves to freeze public sector pay.

Mr Morey said existing support offered to firefighters and police who move to rural areas could be a model for other public servants. Private sector workers should also be encouraged to move to regional areas through payroll tax rebates for their employers, the unions say in the submission.

It also calls for more protection for gig economy workers driving or riding for companies like Uber and Deliveroo, local production quotas for government buying, payments to poor workers and a jobs guarantee backed by state employment.

The most important news, analysis and insights delivered to your inbox at the start and end of each day. Sign up to The Sydney Morning Herald’s newsletter here and The Age’s newsletter here.