The leader of the Serbian Orthodox Church has died from coronavirus just days after leading the open-casket funeral of a bishop killed by the same disease.

Patriarch Irinej, 90, was hospitalised in Belgrade with COVID-19 symptoms earlier this month.

He had been one of thousands of mourners, most without masks, who gathered at the funeral of Bishop Amfilohije, the head of the Serbian Orthodox Church in Montenegro, on November 1.

The large funeral was held in the Montenegrin capital, Podgorica, in violation of measures in place to stop the spread of coronavirus in the small Adriatic state. 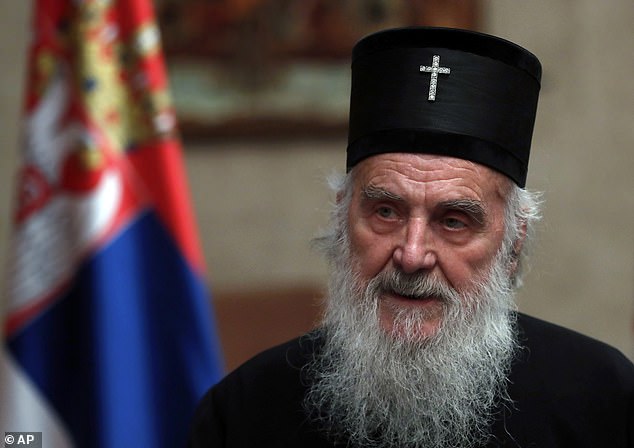 Patriarch Irinej, 90, was the head of the Serbian Orthodox Church. He has died from coronavirus just days after leading the open-casket funeral of the head of the church in Montenegro who was also killed by Covid-19 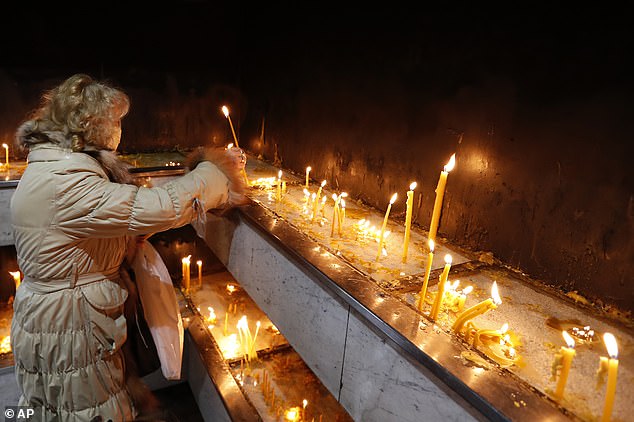 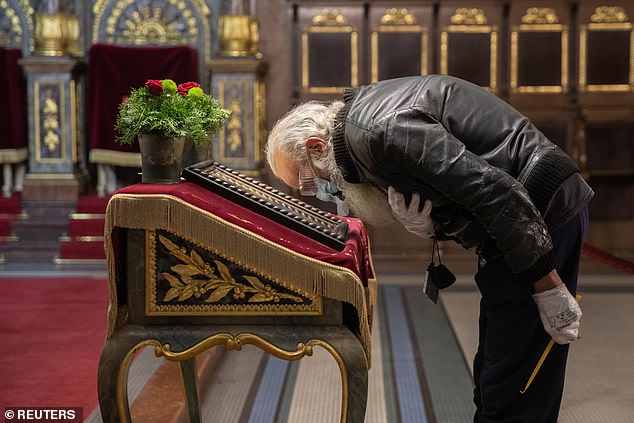 It turned out to be a major coronavirus-spreading event, with several high ranking church officials and others who were there later testing positive.

Photos show mourners kissing the corpse of the dead bishop and Patriarch Irinej sitting a short distance away from the coffin.

In the aftermath of the funeral, Serbian priests have been appealing to their parishioners to take the virus seriously. Many had previously downplayed the threat of the global pandemic.

The country of 6.9million recorded 6,109 new coronavirus cases on Thursday, bringing its total to more than 104,000.

‘It was an honour to have known you,’ Vucic posted on Instagram alongside a black and white photo of the patriarch. ‘People like you are never gone.’ 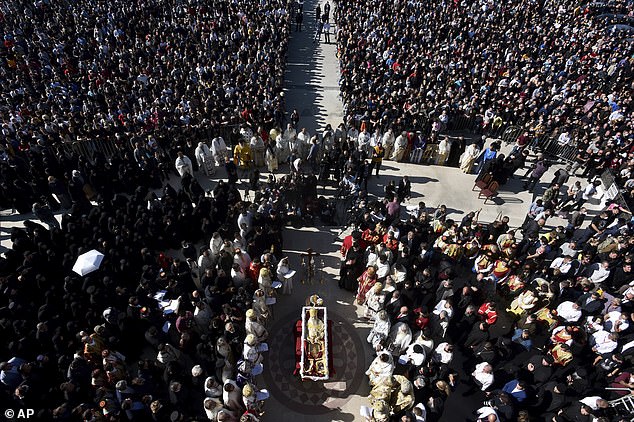 Irinej died just days after leading the open-casket funeral of Bishop Amfilohije, the head of the Serbian Orthodox Church in Montenegro, on November 1. Thousands attended the event in breach of state protocols to curb the spread of coronavirus. It has since been found to be a superspreader event 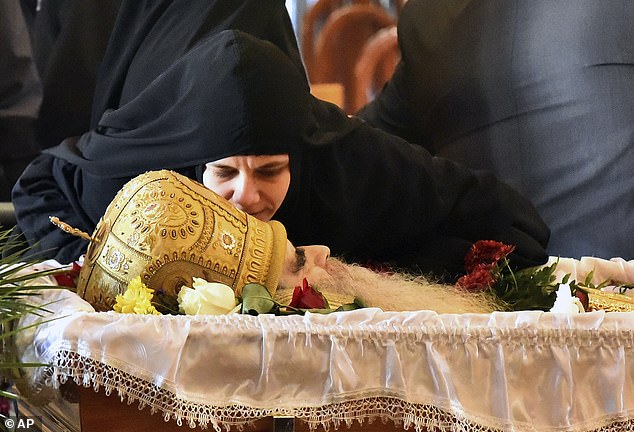 Mourners, including the nun pictured, kissed the crown and head of Bishop Amfilohije, who had died of coronavirus 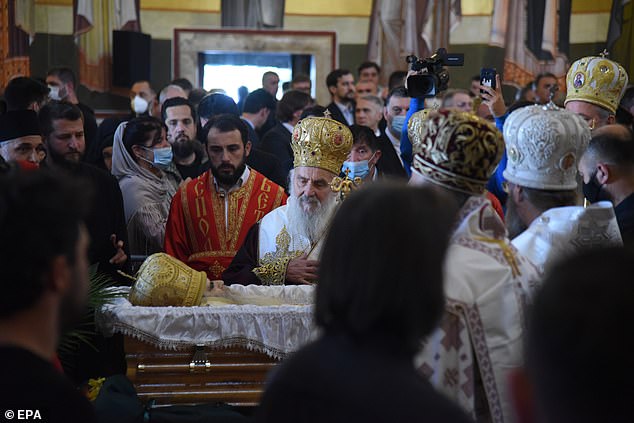 Irinej (centre) is pictured paying his respects to Bishop Amfilohije, who died of coronavirus, just days before the disease would claim his own life

Born Miroslav Gavrilovic on August 27, 1930, Irinej took over the influential church’s helm in January 2010 after the death of his predecessor, Patriarch Pavle, who was a highly popular and respected church leader in the Balkan country.

At the time, Irinej was seen as a relative moderate and a compromise choice among the factions within the church.

But throughout his church reign, he maintained the hardline nationalist stance the church developed during the wars that cleaved the Balkans in the 1990s.

That included beliefs that the Serbs were historic victims of injustice and played on alleged anti-Serb policies in rival Balkan nations as well as the international community.

He often criticised Western policies toward Serbia over its breakaway Kosovo province, which unilaterally declared independence in 2008, and he kept close relations with the Russian Orthodox Church and the populist Serbian president. 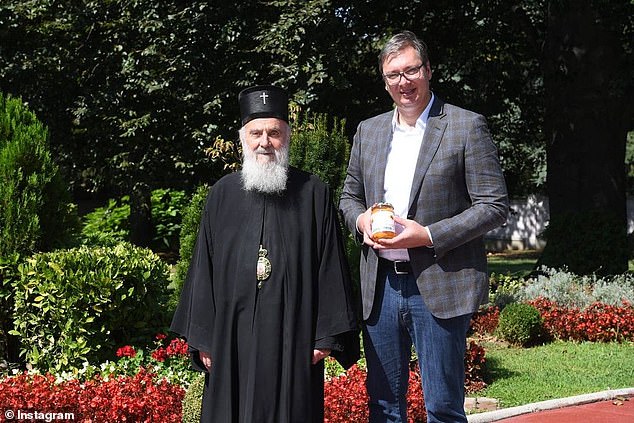 Serbian President Alexsandar Vucic (right) shared a photo of himself and Irinej on Instagram, paying tribute to the religious leader, saying ‘It was an honour to have known you’. Vucic was among those in attendance at Bishop Amfilohije’s funeral 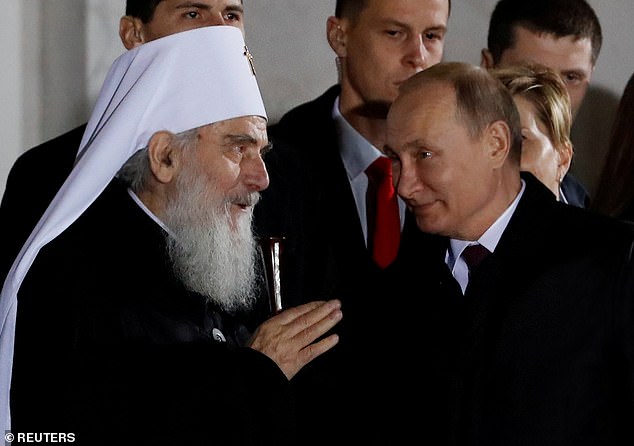 Irinej’s traditional enthronement was held in Kosovo in October 2010 to underscore his dedication to Serbian historic claims that the majority ethnic Albanian-populated former province is the cradle of its statehood.

‘We can’t and must not give away what has been ours for centuries and which has never in history belonged to the Albanian state, even if it has been taken from us and put under foreign occupation,’ Irinej said in an interview posted on the church’s website.

He added that ‘our biggest problem is not our centuries-old neighbours, the Albanians, but ‘developed’ Europe and the West in general’.

Irinej, however, was among the rare Serbian church dignitaries who openly called for improved ties with the Roman Catholic Church.

He said the two churches should overcome historic differences.

The Serbian church is one of a group of autocephalous, or independent, churches that make up the Orthodox Christian faith.

The Orthodox Churches split from the Vatican and the Roman Catholic Church in the 11th century in an event called the Great Schism.

Earlier this week, Metropolitan Bishop Ioannis of Lagadas died amid a spike in coronavirus infections in Greece.

He had one of many in the Greek Orthodox Church who refused to cease the serving of communion bread and wine from the same receptacle, insisting that coronavirus could not be transmitted in this way.

Esther McVey (my ex-client) is a showbiz pariah now