The sun shone on Victoria last weekend, accommodation was fully booked, pubs and cafes buzzed with life and main streets in towns from Bright to Daylesford, Sassafras to Walhalla, Anglesea to Portsea were teeming with paying customers. Easter’s warm spell – perhaps the last before winter – was an opportunity for many Victorians to escape the everyday.

The impetus to stay close to home was only increased by Queensland’s three-day lockdown and the restrictions in northern NSW that followed a feared “hen’s party cluster” in Byron Bay. For regional tourism providers, hit hard by COVID-19 lockdowns and the closure of international borders over the past 12 months, the weekend was a boon. 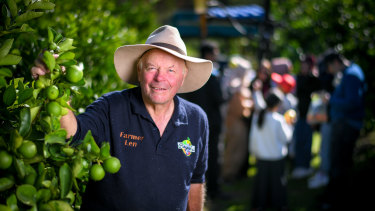 Len Rayner at his farm in Woori Yallock with Easter Monday visitors.Credit:Eddie Jim

“The last four days have been fabulous,” said Len Rayner, owner of Rayner’s Orchard in Woori Yallock. He hosted up to 300 people a day, mostly families from Melbourne, at his orchard.

It was part of a broader trend in touring close to home that had holidaymakers spending $6.8 billion in the regions last year compared with $6.2 billion in Melbourne. For the first time in living memory, more than twice as many visitors went to regional Victoria as to Melbourne. Those figures, however, came in the context of a huge decline in total tourism spending. And one good long weekend will not be enough to turn that situation around. Nor will it sustain worried tourism and hospitality providers through the rest of the year.

“We find the minute it gets cold, the locals won’t come out,” Mr Rayner said. “During the winter 100 per cent of our business was international tourism.”

It is unclear when large-scale international travel will begin again, so the supply of both customers and foreign-visa staff to the tourism and hospitality industries remains uncertain. The New Zealand travel bubble, announced on Tuesday, is excellent news, of course, but it will not replace all the other travellers on whom the regional tourism and hospitality sectors rely.

There are other problems, too. A recent survey of tourism-related businesses showed 13 per cent believed they would be forced to close when JobKeeper ended. The trickle of local visitors might simply not be enough for some to pay their rent and power bills. On the other hand, some tourism and hospitality operators say that in the JobKeeper era it’s been difficult finding staff who are prepared to work. People, they say, have been content to stay at home instead of serving behind a bar or washing dishes.

For those venues that have a steady stream of customers, the end of JobKeeper and the substantial cuts to the JobSeeker rate will show us to what extent this has been a real phenomenon. Some may find it easier to hire qualified staff as a result.

Another issue is property prices. Metropolitan workers able to work flexibly, and looking for a sea or tree-change, have been buying in the regions, forcing up prices all over the state. Hospitality workers, who often work on low wages, say they are being forced out of their local markets.

COVID-19 has wrought many changes on our society. It has introduced new words into our lexicons, given us an appreciation for life outside the rat race, and created a refreshed market for holidays within driving distance of home. The pandemic might do what years of government “regionalism” statements have failed to achieve – reverse the magnetic pull of Melbourne and start to decentralise the state. There is much to be gained from this, but also potential pitfalls, both for new residents and businesses and existing ones.

Governments must now pay close attention to these shifts in sentiment and to the needs they are generating for housing, infrastructure, medical facilities and, most pressingly now, the safe resumption of international travel. Only then will these sudden changes be successful ones.

Meat plant must be held to account for Covid-19 outbreak, says German minister

Two men are shot during argument in Queens