Shocking footage shows the moment a man, 21, smashes his car into a 27-year-old during a police chase- leaving him with life-changing injuries 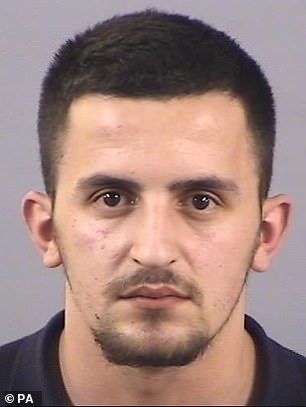 Gentjan Lalaj, 21 , from Wembley, has been jailed for three years and given a six-and-a-half-year driving ban at Southampton Crown Court

This shocking video shows the moment an ‘illegal immigrant’ driver crashes into a utilities surveyor during a police chase- leaving him with life-changing injuries.

Gentjan Lalaj, 21 , from Wembley, north London, was sentenced to three years in prison and given a six-and-a-half-year driving ban at Southampton Crown Court after he was found guilty of causing serious injury by dangerous driving.

He also pleaded guilty to driving without a licence or insurance.

Roderick Blain, prosecuting, told the court that the 21-year-old had failed to stop for police and led pursuing officers on a chase at speeds of 50mph along 30mph streets in Southampton on March 27.

The court heard that Lalaj, who was driving a stolen Volvo car, had claimed he was being chased by someone wishing to enact an Albanian blood feud against him, but this defence had been dismissed by the jury.

Mr Blain said that the victim, 27-year-old Tom Carey, from Rochester, Kent, who had been wearing high-visibilty clothing, suffered multiple injuries when he was hit by the defendant’s car.

The footage shows Mr Carey being catapulted into the air after being struck by the vehicle, which then bursts into flames. 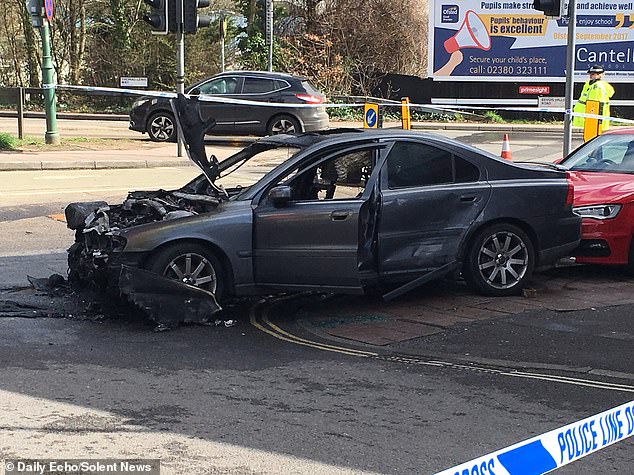 The scene after the volvo crashed and burst into flames. Shocking CCTV footage shows an unsuspecting workman launched into a block of flats after being hit by a speeding motorist who was trying to escape police

His injuries caused him to be in hospital for 12 days and prevented him from attending his grandfather’s funeral.

He added that Mr Carey had been unable to return to work or play his favourite sport of ice hockey.

Mr Blain said: ‘He talks about night terrors, how he relives the incident and he describes how he suffers from panic attacks and anxiety when near to moving traffic.’

Sentencing Lalaj, Judge Nicholas Rowland said the jury had dismissed his claim that he believed he was being chased as part of a blood feud, and told him: ‘The police were trying to stop you but they had to give up as you were driving so dangerously.

‘You drove in such a way as to cause those injuries to Mr Carey who, unlike you, was working hard. This has had a serious effect on his life both personally and at work.’ 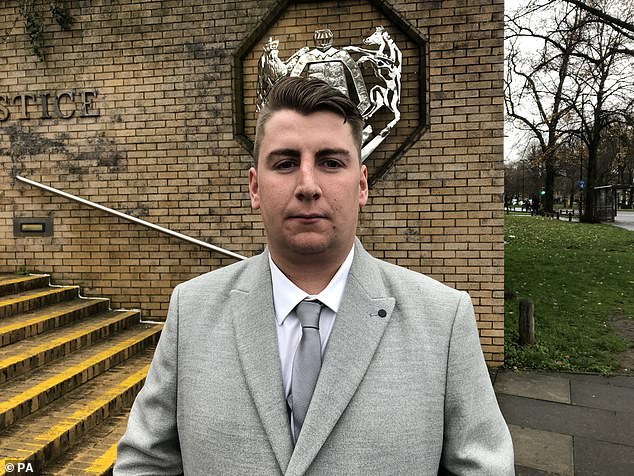 Unyime Davies, defending, said that Lalaj was remorseful and had told police: ‘I feel very, very bad for the man I hit.’

Police Constable Simon Bradbury, of Hampshire Police, said after the hearing that Lalaj had arrived illegally in the UK in the back of a lorry about 18 months ago.

He said the defendant had told the court that he believed he was being chased not by police but by someone enacting an Albanian blood feud avenging the death of someone apparently killed by a member of his family.

Pc Bradbury added that cocaine and heroin was also found in the car, but Lalaj was cleared of possession of class A drugs with intent to supply.

He said: ‘This is the one of the worst cases of dangerous driving I have seen in the last ten years.

‘This culminated in the horrifying collision with Mr Carey, who was extremely fortunate not to be killed.’

Responding to the sentence, Mr Carey said outside court: ‘I have been left with life-long injuries, he has got a lot less than I have got – it’s changed my life.’

Who is Angela Smith and why did the ex-Labour MP resign?

Boy, 17, charged with murder after 16-year-old was stabbed to death while 'protecting his girlfriend'