Shocking moment masked gang men break into jewellery store and steal up to £100,000 in items as they scoop up rings and watches from display cabinets

Shocking footage has captured the moment a masked gang broke into a jewellery store and made off with up to £100,000 worth of precious goods in a late-night raid.

In the CCTV clip, four thieves are seen ransacking Italian Jewellery Ltd. in Ely, Cambridgeshire, scooping up rings and watches from display cabinets they smashed their way inside.

The men appear unfazed by the wailing alarm and billowing security smoke filling the room during the raid, which took place between 2.30am and 3am on November 13.

The group are also heard speaking to each other in the clip, and those at the store are now asking the public to help translate their comments.

The incident followed another attempted break-in at the same store a week earlier, which left the wooden door chipped through attempted forced entry. 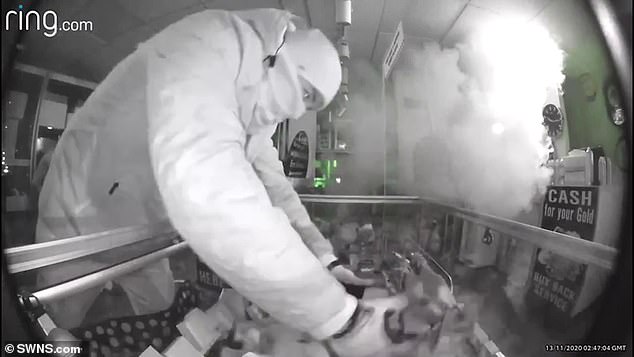 Shocking footage has captured the moment a masked gang broke into a jewellery store and made off with up to £100,000 worth of precious goods in a late-night raid

Writing on their Facebook page last Friday, the store owner said: ‘We are very sad to let you know today that during the night our shop in Ely was robbed.

‘We are asking for your help, if you know anything or saw anything between 2.30am and 3.00am around Ely Town Centre on November 13, especially four men coming from the High Street toward the High Street Passage.

‘We have also managed to isolate their voices from the background noises through an editing program, and would like to ask your help at identifying the language these [men] are speaking.

‘Does anyone here happen to speak their language and can kindly translate what they’re saying?

‘Please share with as many people as you can so we can hopefully get some information on what has happened.’

Cambridgeshire Police has confirmed officers were called to the store at around 2.50am last Friday morning to reports of a break-in.

Detective Sergeant Ashley Ryan, who is investigating, said: ‘This was a smash and grab which saw a staggering amount of jewellery stolen in a matter of minutes. 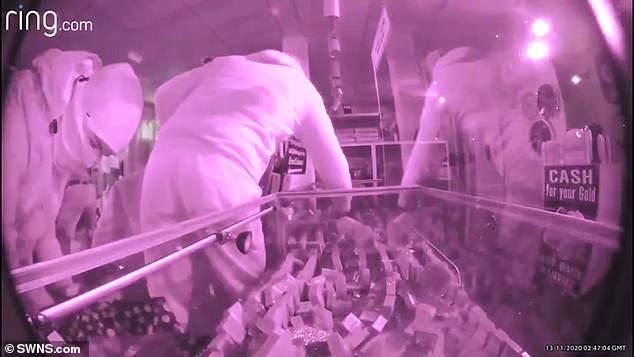 Cambridgeshire Police has confirmed officers were called to the store at around 2.50am last Friday morning to reports of a break-in. Pictured: The raid

‘I’m urging anybody who has any information about the incident, or who recognises the men, to get in touch as a matter of urgency.’

Anyone with information should contact police either by speaking to a web-chat operator on our website www.cambs.police.uk/report quoting 35/77184/20.

Alternatively, if you do not have access to a computer, call 101.

ISIS bride Shamima Begum's bid to return to Britain has cost taxpayers over £30,000