This is the shocking moment a yob flies through the air and kung-fu kicks a man using crutches before stamping on his head repeatedly.

The horrifying footage shows a shirtless bloke facing off to a mob of young men in upmarket Primrose Hill in north London.

In the clip, a topless thug smacks himself on the head as if hyping himself up before launching into the crowd, appearing to kick at one of the youths.

But a youngster hits him with a crutch and then kicks him in the chest, sending the shirtless bloke sprawling to the pavement. 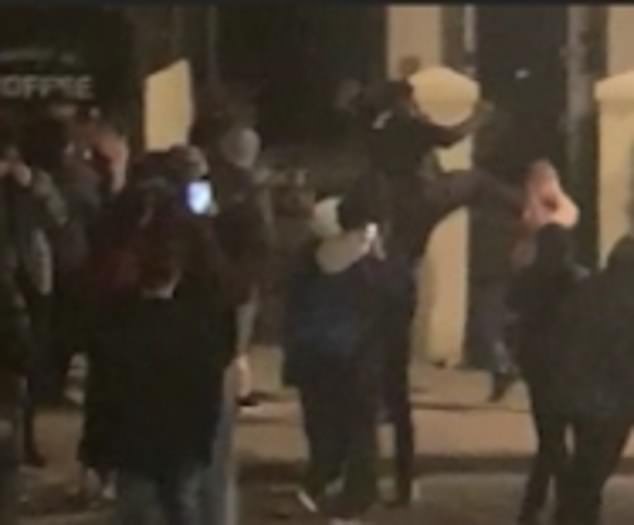 There are at least 20 youngsters gathered around watching the fracas and they cheer loudly as the shirtless bloke hits the ground.

The crutch-wielding thug and five or six of his mates run up to the man on the floor and repeatedly stamped on him, as the disturbing scenes descend into total chaos on Saturday.

Primrose Hill park has been close to the public at night in recent weeks, in a move backed by Camden Council, cops and local MP Sir Keir.

It comes after a slew of antisocial behaviour incidents in the area, including shocking scenes that saw knife-wielding youths clash in the park during broad daylight. 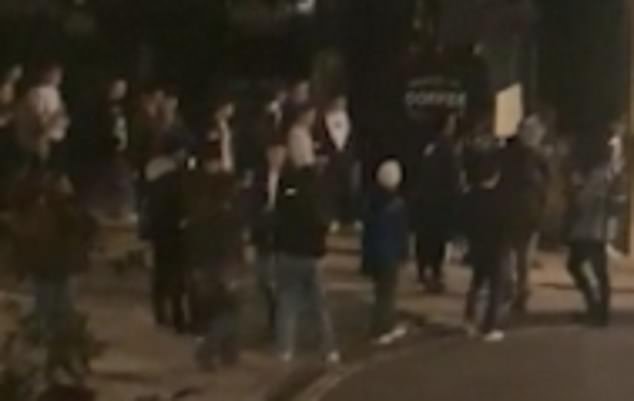 The shirtless man can been seen in the clip smacking his head as if to psych himself up before he runs into the crowd. He is then hit with a crutch, taken to the ground and kicked in the head

Reacting to the video, a woman said: ‘Lovely, I really love our neighbourhood these days. That’s why I pay £2,000 rent, for this kind of show.’

Another woman added: ‘This is deeply worrying and frightening. Prayers for our neighbours. Never saw a more disgusting scene.’