Sir Philip Green is planning a Christmas getaway to a £30,000-a-night island in the Maldives as his high street fashion empire Arcadia teeters on the edge of collapse

Sir Philip Green has planned a Christmas getaway to a £30,000-a-night island in the Maldives as his high street fashion empire Arcadia teetered on the edge of collapse.

News the retail tycoon, 68, will be sunning himself on the Reethi Rah resort over the festive period comes as his empire – which includes TopShop, Dorothy Perkins and Miss Selfridge – faces administration as early as next week.

Former BHS worker Lin MacMillan told The Mirror: ‘This will go down like a lead balloon with Arcadia staff. It’s like sticking two fingers up at them.’

Another, Hannah Cullen, added: ‘It is so insensitive. He has no grip of reality, he lives in a bubble.’

Earlier this week Green was pictured wrapped in a fur coat as he lay out on the deck of a superyacht off Monaco. 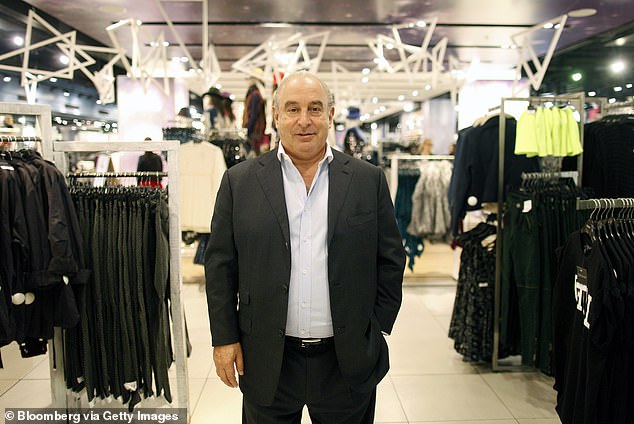 News Philip Green (pictured), 68, will be sunning himself on the Reethi Rah resort over the festive period comes as his empire – which includes TopShop, Dorothy Perkins and Miss Selfridge – faces administration as early as next week

ANALYSIS: Arcadia would be the ‘brightest star of the high street to fall’

Arcadia was struggling before the pandemic but it still would be the brightest star of the high street to fall.

The group’s Topshop brand used to lead the fashion retail pack, but with online competition so fierce from the likes of Asos and Boohoo, trading had become much tougher.

The pandemic not only accelerated these trends but threw the retail empire into chaos with the forced closures of 550 stores. Tinkering around with rent reductions and the dramatic shrinkage of the business it seems may have been a case of too little, too late.

It will be a major blow for Sir Phillip Green who styled himself as the King of the high street, and who helped fund a retail academy round the corner from the flag ship Oxford Street Top Shop store.

But fashion has been a major retail casualty of the pandemic, with in store sales down by 22 per cent in October. Fresh lockdowns and digital drift are only adding to the pain.

If the brands do survive, it will have to be with a much smaller bricks and mortar footprint and a much bigger presence online.

There is likely to be intense interest in the Topshop business in particular, with its fashion credentials and strong customer base, although the Dorothy Perkins and Burton brands may be a much harder sell in the hard to shift mid-market.

Former footballer David Beckham and chef Gordon Ramsay are said to have spent several New Year breaks together with their families at the resort.

In what could be the biggest UK corporate collapse of the coronavirus pandemic so far, the Arcadia Group is set to appoint administrators from Deloitte as early as next Monday although the plans could still be delayed.

The revelations emerged on Black Friday as non-essential retailers in England stayed shut while the four-week lockdown continues, with the crisis having already claimed 250,000 job losses or potential redundancies.

The move, which is said to have come after Sir Philip could not secure an emergency £30million loan to keep the retail giant afloat, puts its 13,000 staff at risk of redundancy, four months after it axed 500 roles in its head office.

Bosses at the Usdaw union said it was ‘a devastating blow for workers at Arcadia and could not have come at a worse time, just before Christmas’, adding that they were seeking urgent meetings with management.

And Julie Palmer, partner at restructuring firm Begbies Traynor, said: ‘The mood music would suggest that Sir Philip Green has used up his last lifeline, and administration may be the inevitable destination for Arcadia.’

Arcadia Group said it had been working on ‘contingency options’ to secure the group’s future, and that it expected its stores to reopen next week when the UK Government’s latest four-week lockdown ends.

England is in the midst of a lockdown due to the pandemic that has forced the closure of all shops selling items deemed to be non-essential.

The lockdown expires next Wednesday when all shops will be allowed to reopen.

A spokesman for Arcadia also admitted that the ‘forced closure of our stores for sustained periods as a result of the Covid-19 pandemic has had a material impact on trading across our businesses.’

In March 2019, Mr Ashley told the Times he would not buy Sir Philip’s Arcadia group even ‘for a pound’, quashing speculation that he was considering an acquisition of it or a partnership with private equity firm.

Why is Theresa May ploughing on with a vote she looks doomed to lose?

Backlog means courts could be clogged until NEXT YEAR