What if Donald Trump was black?’ SNL sketch re-imagines the beleaguered president as ‘Darius Trump’ in an Empire-Inspired sketch which has a very different ending for POTUS

An SNL sketch which depicts Donald Trump as a black President ends with him getting arrested by the FBI.

In the humorous segment, inspired by Fox’s hit show Empire, comedian Kenan Thompson plays POTUS ‘Darius’ Trump, who is married to Malika Trump with their children Darius Jr and L’evanka.

The short clip, titled ‘Them Trumps’ opens with a adviser ominously informing President Darius Trump ‘it might be over’ following a week of controversy in which the real president tweeted that he was ‘totally clear’ of wrongdoing. 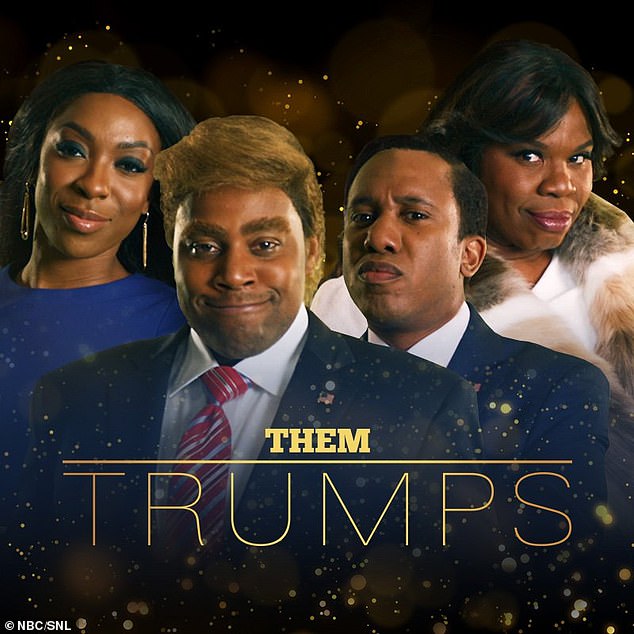 This week a federal prosecutor singled out Donald Trump as being directly involved in efforts to silence actress Stormy Daniels and former Playboy model Karen McDougal to avoid October-surprise embarrassments during the 2016 election.

In ‘Them Trumps’, the advisor tells Darius: ‘Sir they know everything, they know about Russia.

‘They know you used campaign money to cover up an affair with Magic City Stripper Cinnamon Mercedes and they know about the pyramid scheme you’ve been running through your company Darius Trump country hams’.

After being informed his presidency might be over, Darius responds: ‘Oh, it’s not over. Not by a long shot. We’ll beat this. Or my name isn’t Darius Trump’.

As they sit together in the Oval Office, Darius Jr tells his father: ‘Dad, the media has been out for you since day one and you proved them all wrong’.

His wife Malika then interjects: ‘That’s right, nobody ever thought you would get this far. The bankruptcies, your baby mama. But here you are on top’.

L’evanka Trump, inspired by Donald’s glamorous daughter Ivanka, reassures her father that everything will be alright

Darius reassures them confidently that he will emerge from all the controversies with an untarnished reputation, saying: ‘Yeah. Maybe I done some dirty things. I’m making America great again.

‘And what these feds don’t realize is that I’m the president! The most powerful man in the most respected office in the world. They can’t like me. And even though I may be black…

FBI agents suddenly storm into the Oval Office and approach Darius Trump saying: ‘Freeze, Trump, you’re under arrest!’  He then responds: ‘Yeah, that sounds about right’.

The credits then roll before Darius Trump is freed because the president cannot be tried while in office.

Inside City Builders, the Pentecostal sect with lofty political goals

Braverman had 90-minute shouting match with Truss before quitting