A STUCK-up neighbour has been branded "Hyacinth Bucket" after sending a note begging new residents to keep their bins hidden.

The "snobby" local asked homeowners to stash the bins in their back gardens to keep house prices up. 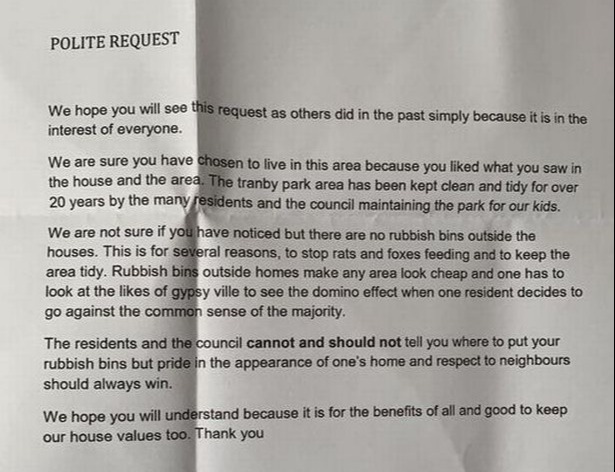 They also said they didn't want the street in Hessle, East Yorks, to look like "Gipsyville" – a deprived suburb of Hull.

The letter read: "We hope you will see this request as others did in the past simply because it is in the interest of everyone.

"We are not sure if you have noticed but there are no rubbish bins outside the houses. This is for several reasons, to stop rats and foxes feeding and to keep the area tidy.

"Rubbish bins outside homes make any area look cheap and one has to look at the likes of gypsy ville (sic) to see the domino effect when one resident decides to go against the common sense of the majority."

It continues: "The residents and the council cannot and should not tell you where to put your rubbish bins but pride in the appearance of one's home and respect to neighbours should always win.

"We hope that you will understand because it is for the benefits of all and good to keep our house values too. Thank you."

But the anonymous note has caused uproar among locals after it was shared to Facebook by new homeowner Gillian Hunter.

She said: "Less than four weeks in my house and my neighbour has this delivered to me by second class Mail."

The anonymous neighbour has been likened to snobby Hyacinth Bucket from TV show Keeping Up Appearances by Facebook users.

Others urged Gillian to ignore the request and keep her bins outside her home.

One said: "Whoever wrote that knows exactly how entitled and snobby it is or they would've signed their name to it.

"I'd rather live with the folks of Gipsyville than that snobby trash. I would purposely leave it out from now. Such arrogance!"

Another said: "I'd replace your bins with a permanent 12ft skip. Then I'd write back that I didn't like their car and have they considered changing it for the good of the residents? Absolute drainers."

While one wrote: "Burger van in the front garden concrete lions either side of your drive, england flags from bedroom windows."

Gillian later posted an update saying another neighbour received the same letter and revealed she is "standing strong". 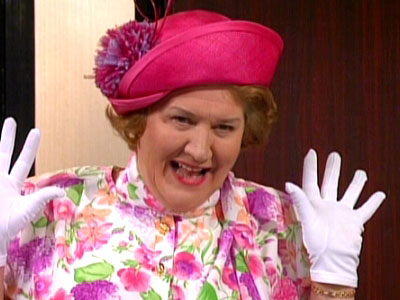