A crooked solicitor and his colleague tried to sell houses they didn’t own in a £3million scam that has seen the pair jailed for a total of 12 years.

Hashok Parmar, 63, and Syed Gous Ali, 46, used the cover of Sterling Law Solicitors, based in Loughborough, in their plan to sell the three London properties.

The pair used forged documents to attempt to carry out three sales – which, if successful, would have made them an estimated £3million. 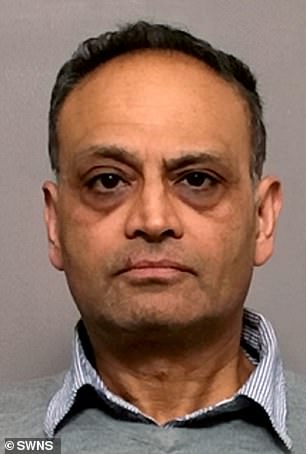 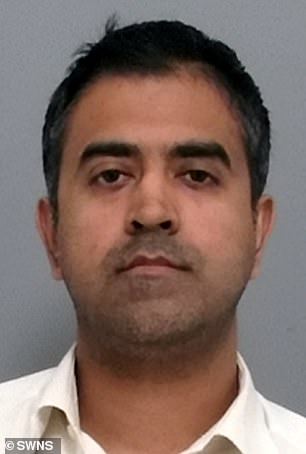 Hashok Parmar (left), 63, and Syed Gous Ali (right), 46, tried to sell houses they didn’t own in a £3million scam that has seen the pair jailed for a total of 12 years

They were frustrated when other law firms saw through the deception. The pair, both from Loughborough, appeared at Leicester Crown Court to be sentenced.

After the hearing, Leicestershire Police released their mugshots and details of the case.

It said Ali was the firm’s practice manager and Parmar its sole solicitor and, according to company records, its director.

They were operating what is known as ‘property take-over fraud’, whereby ownership deeds or titles are changed fraudulently and a new name put on them.

Concerns about the pair were first raised in 2015 when officers received a report from a solicitor’s firm on behalf of a client who believed he had purchased a house in London.

This type of fraud occurs when criminals change the deeds or titles of a property, and pretend to be the owner in order to take it over.

It is rapidly becoming a growing problem for law firms, whose clients may think they are buying a property fairly and legally, but in reality it is not for sale and has never even been on the market.

In a statement, the force said: ‘It later transpired that the sale was fraudulent and the property was never on sale nor did the rightful owners know anything about what had occurred.

‘The investigation revealed Ali provided bogus paperwork to confirm the identity of  the sellers to the conveyancing solicitors.

‘Following the transfer of £240,000 the money was transferred to other accounts overseas and withdrawn in cash which was paid into various bank accounts including ones belonging to Ali and a solicitor’s account associated with Parmar.

‘Attempts were made to sell two further properties in London in similar circumstances.’

Ali had pleaded guilty to the two offences earlier this year and was then sentenced to six years in prison.

Parmar was found guilty of the charges following a trial earlier this year. He was also sentenced to six years in prison.

Detective Constable Matthew Swift of the force’s economic crime unit, said: ‘This was a lengthy and complex investigation which has taken more than four years to get to this stage.

‘Between the end of 2014 and beginning of 2015 attempts were made to sell three properties.

‘Each sale had the same modus operandi – a person would pretend to be the real owner and would agree a sale to an innocent purchaser.

‘The properties were in London but the conveyancing would be conducted by firms of solicitors in Leicester introduced by Ali or Parmar.

‘Luckily solicitors for two of the three sales became suspicious and the defendants were unsuccessful.

‘We are pleased this investigation has subsequently led to both men being convicted for their crimes.

‘It will hopefully go some way in reassuring the community that we can and will investigate such offences and bring those responsible to justice, and deter others from committing sophisticated frauds.’

Companies House, the official register of UK businesses, records that the law firm in High Street, Loughborough, was dissolved in 2015.