John Bercow has hinted he could stay as Speaker for a few extra days if a snap general election is called for December.

He is due to step down on Thursday after 10 controversial years in the post, with an election for his replacement on Monday November 4.

But if MPs vote for a general election today the Commons may have to sit for a couple of days next week, after he is due to leave on October 31.

Several candidates vying to replace him today asked the Speaker if he would consider hanging on for a few more days so the election for the job could be held after the December national vote.

In remarks likely to infuriate Brexiteers he told MPs he did not ‘slightest ambition to serve any longer’ in the role, but if the Commons asked he would take the request ‘extremely seriously’. 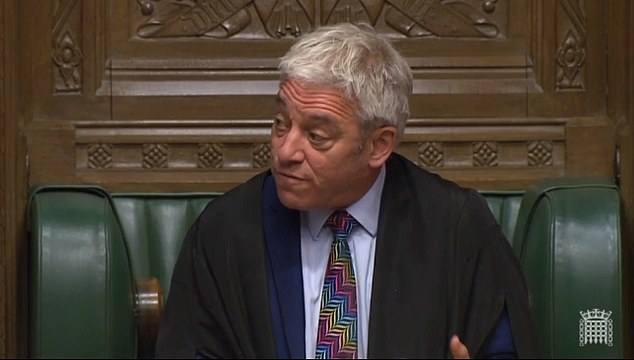 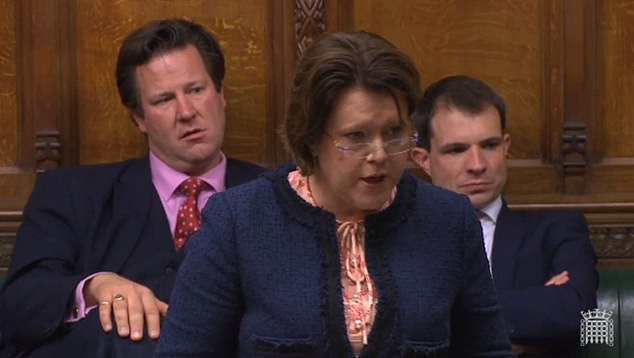 Mr Bercow also said there is ‘merit’ in hearing the views of the candidates to replace him and from the ‘usual channels’, which refers to the working relationship of the whips from the different parties and the leaderships of the Government and Opposition parties.

The election for a new speaker is scheduled for Monday November 4 although Parliament could be dissolved shortly after if MPs support a December election.

In response to a series of points of order, including requests for him to extend his stay, Mr Bercow said: ‘I made my announcement on September 9 and I meant it, I have not the slightest ambition to serve any longer than the close of business on Thursday.

‘Having been a member of this place 22 years and Speaker as 10 I will do my duty – and if the House asks me to do as people have requested, of course I take that extremely seriously and as close to being an instruction as makes no difference.’

Mr Bercow said the matter should not be resolved in the chamber at this time.

Tory former minister Maria Miller earlier said: ‘The House of Commons could well agree to an early general election today with Parliament dissolving on Monday which is the day scheduled for the election of your successor.

‘If a general election is called, many members could be quite understandably detained in their constituencies on Monday, so to preserve the dignity of this place and also the importance of the election, could I call upon you to consider continuing in your position for the next two working days to ensure that you leave this place in the way that you would want to?’

And Labour former minister and candidate to be the next Speaker, Chris Bryant, said: ‘As a candidate I would just gently say that it would be good to get this resolved as soon as possible.

‘I think it would be daft for us to have a speakership election before the general election.’

But Tory MP Michael Fabricant said it is right MPs should choose a speaker they are familiar with.

He said new MPs elected after a general election may simply resort to voting along party lines. 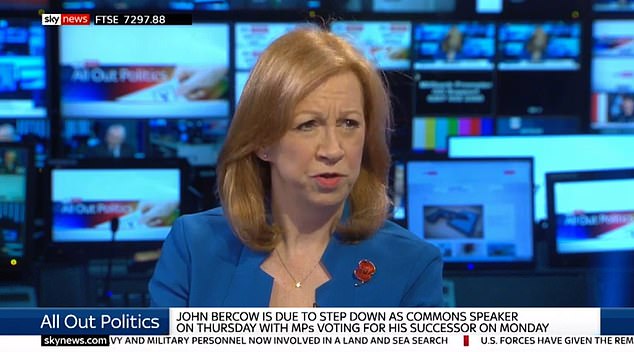 Dame Eleanor Laing told Sky today the vote might not be held on Monday, saying: ‘If the (election) bill goes through today and Parliament can dissolve this week then we might not have an election on Monday’

He said: ‘There is a possibility of a large churn at the next general election with new members of Parliament, who actually won’t have a clue about the individual candidates, will vote on party lines and I don’t think that is right for Parliament.’

It came after one of the candidates suggested the vote could not be held on Monday. Dame Eleanor Laing told Sky today: ‘There is some doubt about that. It all depends on the timing.

‘If the (election) bill goes through today and Parliament can dissolve this week then we might not have an election on Monday.’

The exchanges in the Commons followed staunch Brexiteer Tory MP Mark Francois bidding farewell to Mr Bercow by making a jibe about his height.

Mr Francois is the deputy chairman of the European Research Group, a Tory pro-Brexit group of MPs, which has often disagreed with Mr Bercow’s rulings around Brexit in the Commons.

He made the good-natured remarks during health questions.

Calling Mr Francois to speak, Mr Bercow said: ‘We stood against each other in Conservative student politics in 1986.

Responding, Mr Francois said: ‘Mr Speaker, you won. And I can I say although we have not always agreed on everything, in the 18 years that I have been in this House, can I say most earnestly, from one midget to another, I wish you a long and happy retirement.’

Mr Francois has a history of making self-deprecating jibes about his and the Speaker’s height.

Anne-Marie Trevelyan will lead a raft of new female ministers