More recyclables are being sent to landfill during COVID-19 lockdowns as Victorians isolating at home put takeaway food containers, coffee cups and parcel delivery wrapping in the wrong bin.

A report from government agency Sustainability Victoria found 20 per cent of 540,000 tonnes of kerbside recyclables, or 110,000 tonnes, went to landfill between July 2020 and May 2021. This is an increase of 3 per cent compared to the long-term average. 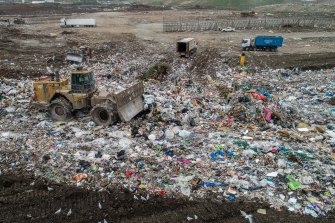 Garbage is processed at Melbourne Regional Landfill in Ravenhall.Credit:Joe Armao

The report blamed the spike on an increase in contamination due to COVID-19, combined with increased levels of low-value recyclables, such as fine pieces of glass.

Almost half of kerbside recycling sent to landfill in 2020-21 was contamination, up from a quarter the previous year and 36 per cent the year before that.

“More people are getting takeaway food. We’re increasing the volume, exponentially, of our packaging,” he said.

“People are putting the wrong garbage in the wrong bin … It’s putting more and more pressure on landfill, all the time.” 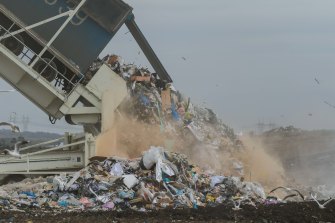 The landfill levy will almost double over three years from $66 a tonne to $126. The first increase came into effect in July.

Mr Anderson said the cost of the increased landfill would ultimately be passed on to the consumer through hikes in council rates.

“The more people don’t know or don’t choose to apply themselves, the harder it is for [waste] to be recycled,” he said.

“[Then] there’s the wishful recyclers who put a piece of clothing that they would normally donate to a charity shop direct in the [recycling] bin, and you can’t do that.”

“If there aren’t sufficient collection systems conveniently servicing the consumer then you can’t blame people for not knowing what to do with [waste] or how to recycle it,” he said.

“It was already inherent in the system before COVID. It’s amplified existing bad practices.”

The waste experts said incoming programs in Victoria such as a four-bin system and container deposit scheme would help reduce landfill levels, but more investment was needed to develop a strong market for recycled products.

However, she was hopeful new app, Recycle Mate, being rolled out nationally next month would help reduce landfill by helping consumers identify the correct bin for their waste.

Australia’s biggest rubbish collection company Cleanaway reports an up to 10 per cent increase in volume and slightly higher levels of contamination in its sorting facilities during Melbourne’s most recent lockdown.

“Anecdotally, some of this was caused by contamination increases in [sorting facilities], meaning that some recycling had to be sent to landfill,” he said.

“Thankfully, we’re not seeing the same increase in volumes, like we did last year.”

The percentage of recyclables sent to landfill in 2019-20 was 26 per cent, however, this increase was due to the temporary closure of the former SKM Recycling’s sorting facilities, rather than contamination.

WHO official warns Europe must brace for second coronavirus wave