Sir Keir Starmer sparked Remainer fury today by ruling out trying to reintroduce freedom of movement for EU citizens if Labour wins the next general election.

Sir Keir ran his leadership campaign last year on a pledge to bring back the same movement rules as were in place before the UK quit the block.

But today he appeared to do a screeching U-turn, saying that the public would expect a 2024 Labour government to honour Boris Johnson’s Brexit treaty with Brussels.

Appearing on the BBC’s Andrew Marr show he said: ‘I don’t think there is an argument for reopening those aspects of the treaty.

‘We have a treaty, it’s a thin treaty, it is not what was promised, but I’m very conscious of the fact that everything I am doing, everything the Labour Party is doing is geared up to focus on winning in a general election in 2024.

His comments could prove embarrassing to the heavily pro-EU Labour MPs.

Last week Canterbury’s Rosie Duffield told HuffPo that the majority of the parliamentary party was ‘desperate’ to rejoin the EU if it took power.

Hardcore Remainers lashed out at his pragmatic comments today.

Green Party MP Caroline Lucas said: ‘Disappointing to watch Keir Starmer justify voting for what he acknowledges is a very damaging Brexit deal – and saddening that Labour leader will no longer argue for the principle of free movement.’ 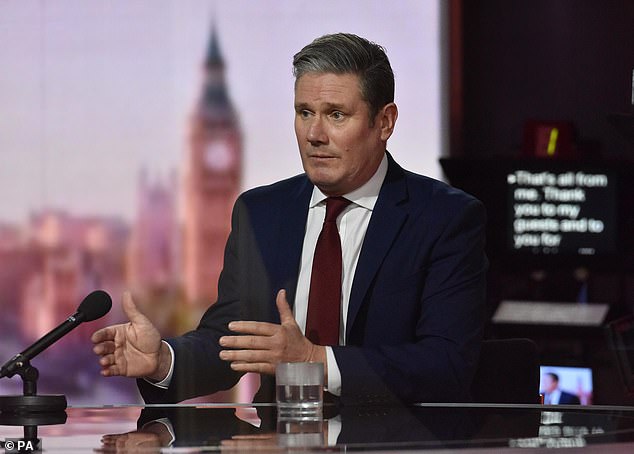 Sir Keir ran his leadership campaign last year on a pledge to bring back the same movement rules as were in place before the UK quit the block. 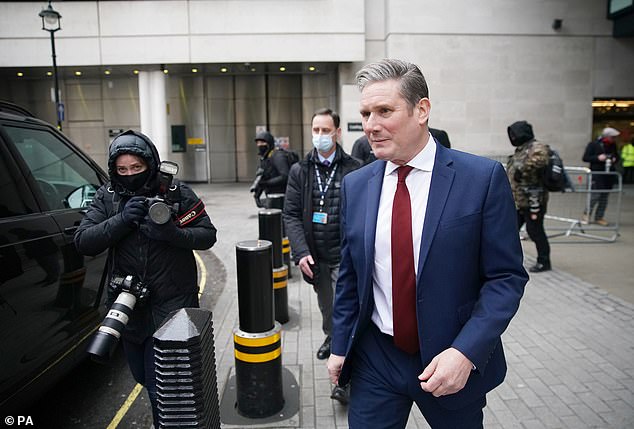 But today he appeared to do a screeching U-turn, saying that the public would expect a 2024 Labour government to honour Boris Johnson’s Brexit treaty with Brussels. 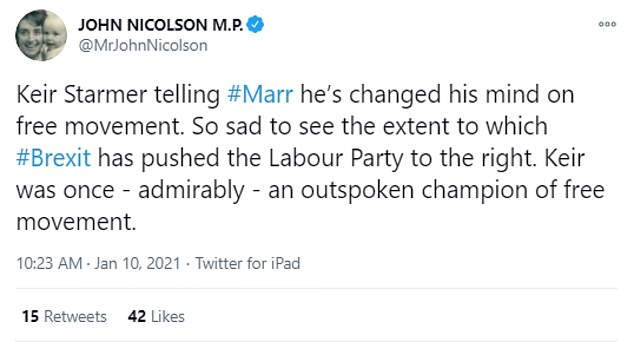 Hardcore Remainers lashed out at his pragmatic comments today

John Nicolson, whose SNP Government in Edinburgh wants an independent Scotland to rejoin the EU, added: ‘Keir Starmer telling Marr he’s changed his mind on free movement. So sad to see the extent to which Brexit has pushed the Labour Party to the right.

‘Keir was once – admirably – an outspoken champion of free movement.’

The Labour leader went further than ruling out free movement and said he does not think there is a case for rejoining the EU.

He told Marr: ‘Whether we like it or not that is going to be the treaty that an incoming Labour government inherits and has to make work.

‘It is not being straight with the British public to say you come into office in 2024 and operate some other treaty. We have to make that treaty work.’

He added: ‘I don’t think there is a case for rejoining the EU, I’ve said that before, I think on your (Andrew Marr) programme.

‘But I think pretending to the British public that somehow after four years’ negotiation the treaty that has just been secured is going to be up for the grabs and that the EU are going to start saying ‘let’s start all over again’, that is not realistic.’

However, he did suggests that parts of the EU/UK trade deal could be up for change, amid during at increase problems for exporters in the first 10 days past Brexit.

‘We voted for the deal because the choices before us were to vote for the deal – a thin deal, a deal that isn’t a good deal for manufacturers, for the service sector certainly – but the alternative was no deal,’ he said.

‘There are bits already that need to be improved on. If you look at the creative industries and how they are going to operate across borders, there are huge gaps for them. The service sector of course has largely been left out.

‘It is thin, it isn’t what the Government promised, but it is better than no-deal and we need to make it work.’