This is the startling moment a shark bites the mask off a diver’s face – and he miraculously escapes with a small scratch.

Peter Schneider was on a dive in Rangiroa, French Polynesia, when his group were surrounded by six silvertip sharks.

Footage shows a diver sitting in the coral when one of the predators approaches from the side and opens its jaws wide before biting down on his goggles. 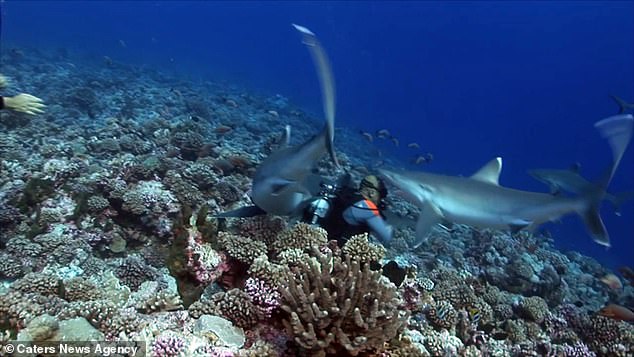 The sivertip shark bites the goggles from the man’s face as he sits on the coral during a diving trip in Rangiroa, French Polynesia

The mask is quickly lifted from his head and the diver falls back into the coral before he starts to swim away to try and get out of the way of the sharks.

The silvertip sharks continue to swim around the group but do not come so close again.

Mr Schneider, from Berlin, Germany, said: ‘I couldn’t help but scream when I saw it happen. Once the sharks had cleared, I swam over to check on him.

‘He had no injuries, just a little scratch on his forehead. The shark wasn’t looking to hunt and kill.’ 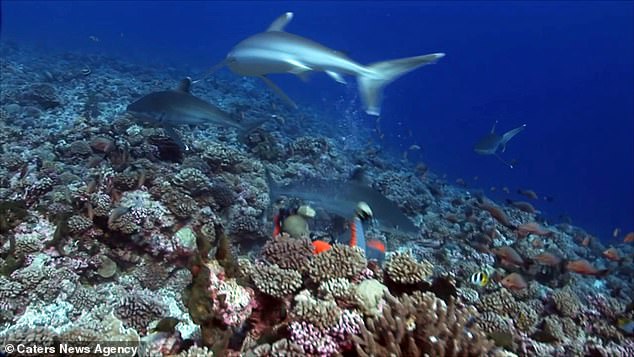 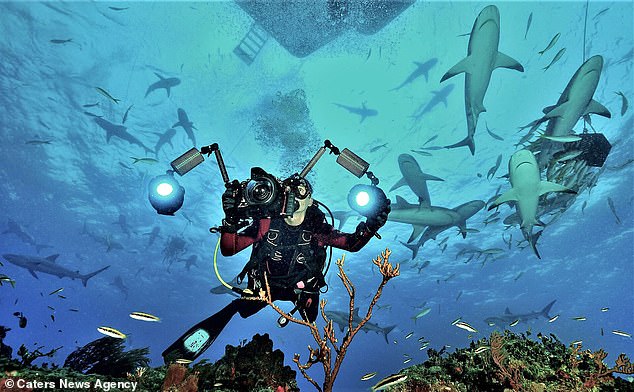 The footage was filmed in 2007 but has only just been released in high definition for the first time.

Silvertip sharks are potentially dangerous to humans, as they can sneak up quickly and quietly on divers, especially if there’s food around.

Peter said: ‘It was the diver’s fault. Obviously the main aim is to attract sharks and sometimes the feeders like to tease them a little bit.

‘Often the sharks will tease back and that’s what happened here.

‘I didn’t have any pity for the diver as he’d provoked the reaction and he knew it.’

Masks for primary school kids supported but could cause ‘uncertainty’

Deputy indicted in shooting of man who called 911 for help