A stockpile of flammable and explosive e-waste that includes discarded batteries and airbag detonators has been found near suburban homes and the EastLink tollway at an unlicensed recycling operation in Ringwood.

Regulators and emergency services are scrambling to manage the threat from waste that is suspected to be stored in hundreds of steel drums on the premises of metal recycler Recycal. There is also a large pile of mixed plastic and steel scrap that is considered a fire hazard.

Batteries and airbag detonators are classified as highly dangerous waste products because of their propensity to spontaneously combust, explode when exposed to fire or water, and spread toxic contamination when burning or leaking.

Fires at battery recyclers Envirostream in January 2019 and MRI in August 2020 caused two of the worst industrial blazes in Melbourne in many years, with fiery shrapnel from exploding batteries damaging properties dozens of metres away and spreading plumes of toxic smoke.

Recycal director Douglas Rowe told The Age the batteries and airbags on the property were stored safely and did not pose a risk. “We will be processing them safely,” he said. And the Environment Protection Authority said it believed the Recycal site on Heatherdale Road does not pose an immediate risk to health or the environment.

But the EPA and WorkSafe staged an urgent inspection of Recycal’s facility last Thursday after The Age discovered the regulators had failed to follow up on the potential threat despite opening an investigation nearly five months earlier. In a bid to prevent any further build up of material, the EPA has also ordered Recycle to “immediately cease accepting combustible waste materials”. 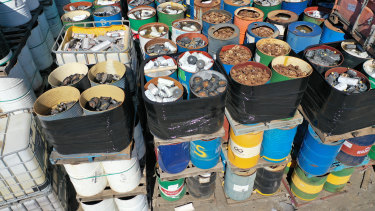 A stockpile of steel drums suspected to contain airbag detonators.

The regulator declined to comment on whether any of the airbag detonators stockpiled metres from EastLink are the common explosive-based models that are dangerous unless properly deactivated. The regulator has said it would return to the site within days to continue to assess the scale of the problem.

Meanwhile Fire Rescue Victoria said it had strengthened its emergency planning in response to the higher risk of a fire and the increased danger a blaze or spill poses to firefighters and the community, a spokeswoman said.

Despite claiming it has a “zero tolerance” to misconduct, the EPA has not completed an investigation it opened in November 2020 into claims Recycal had been running a rogue e-waste recycling operation.

The investigation was sparked by information, including photographs, provided in November 2020 by a confidential source, that allegedly showed Recycal had been amassing batteries, airbag detonators and other potentially dangerous materials in violation of fire safety, environmental and dangerous goods regulations. 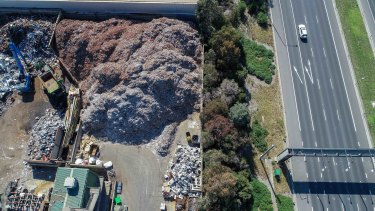 The EPA told The Age its investigation had remained active over the five-month period, and included surveillance of Recycal’s operations. But the agency has refused to confirm whether it conducted any inspections as part of its investigation, citing legal complications from its current actions involving Recycal.

“As there are further investigations under way, EPA will be limited in the information it can share publicly but will act to protect community safety immediately as required,” the spokesman said.

Safety experts have questioned whether the stockpile of airbag detonators presents a threat.

“It’s not likely it will create a fire but what you will have is the sudden release of explosive gasses and if you are getting these things popping off one after another it’s not the safest place to be around.”

WorkSafe, which is responsible for regulating the safe disposal of airbag detonators, said it was “making inquiries” in light of the discoveries at the Ringwood property.

Photographs obtained by The Age show a significant number of the devices visible in the stockpile carry the branding of luxury car company BMW, which was forced to recall millions of airbags in 2018 due to injuries and deaths caused when they accidentally exploded.

“While we acknowledge the components in the images are BMW branded, we are unaware of their origins. Furthermore, BMW Group Australia has stringent processes in place for the safe and environmentally-sound disposal of affected parts,” a BMW spokesman said. 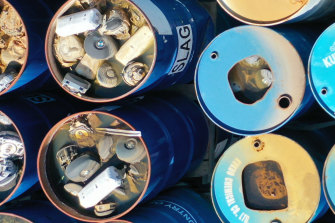 Recycal director Douglas Rowe said that while the business had made “mistakes”, its goal was to work with regulators to ensure recycling is done safely, efficiently and commercially to prevent material going to landfill.

“We’ll sit down with them and work it out. We are not going anywhere, we will fix what is needed to be done, will be the leaders in this area of recycling, and have a reputation for doing that and we have a reputation in spending a lot of money to get a lot of things right,” he said.

Mr Rowe said the build up in batteries and airbags had been caused by delays in getting equipment repaired during the COVID lockdown. He also said Recycal had been misled by a client about the type and poor condition of the batteries inside the containers found on the property.

Mr Rowe also claimed “98 per cent” of the airbags were either already deactivated or were not the explosive type that is considered high-risk.

Queens nurse becomes first in US, New York to get Pfizer’s COVID-19 vaccine