Stormy weather uncovers mystery wreck off Cornish coast: Experts believe remains are either French vessel which sank in raging seas more than 150 years ago or German ship which hit reef and was lost in 1886

Stormy weather has uncovered an 18th century shipwreck off the Cornish coast – with experts believing it’s either a French vessel that sank 150 years ago, or a German ship that ran aground in 1886.

The remains were discovered off Porth Kidney Sands as wooden chunks of the boar was revealed to passers-by, after combination of stormy conditions and high tide.

Locals who live near the beach, close to St Ives, say they cannot remember the last time the wreck was visible, as mystery surrounds which ship the remains belong to.

Vessels have run aground on the beach since the 16th century, but experts believe the remains uncovered last week date back as early as 1865.

The French brigantine Providence, which was wrecked during a storm in October 1865, is a strong contender for being the identity of these remains. 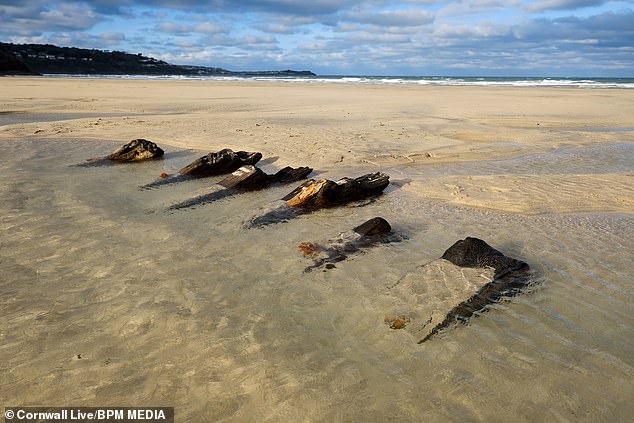 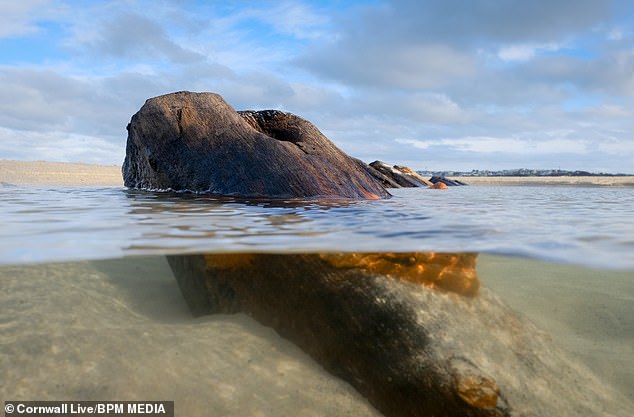 Locals at Porth Kidney Sands, near St Ives, say they cannot remember the last time the wreckage has been visible

However, archive photographs also show that another ship that could lay claim to these elusive remains is the SV Albert Wilhelm.

Built in 1856, the German brigantine Albert Wilhelm was sailing from the Isle of Man to Fowey when it struck Stones Reef off Godrevy on 16 October 1886.

With the hull leaking, the Albert Wilhelm made it to Porth Kidney Sands where it eventually ran aground.

A lifeboat was launched from nearby Hayle and managed to rescue all of the Albert Wilhelm’s crew.

They remained on the beach that night, only to see a second ship run ashore next to their own vessel the following morning. 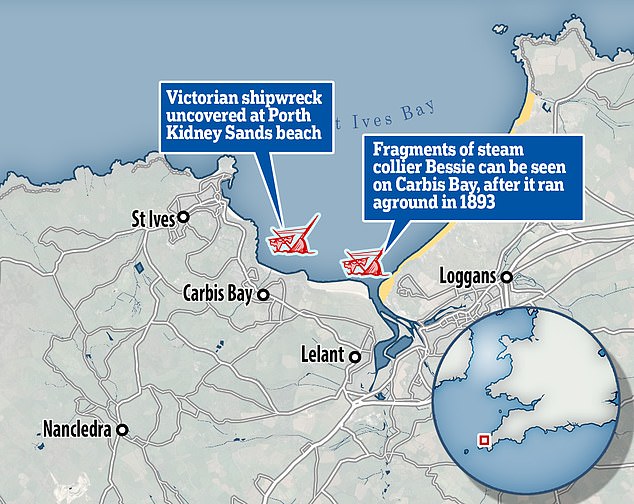 The south-west coast is no stranger to beached ships.

Visitors to nearby Carbis Bay can often see the jagged fragments of the steam collier Bessie, which was wrecked alongside two other ships during a raging storm on 17 November 1893.

The storm became known as the ‘Cintra Gale’, named after one of the first steamers to be run aground by the storm.

The 418 tonne iron ship Cintra was sheltering from the storm with its cargo of coal in Carbis Bay, but the gales forced it ashore, smashing it into the beach. Seven of the Cintra’s crew of 12 were lost.

Meanwhile, as the Cintra broke up, another steamer with a cargo of coal, the 345 tonne Vulture, was wrecked less than 100 metres down the beach. 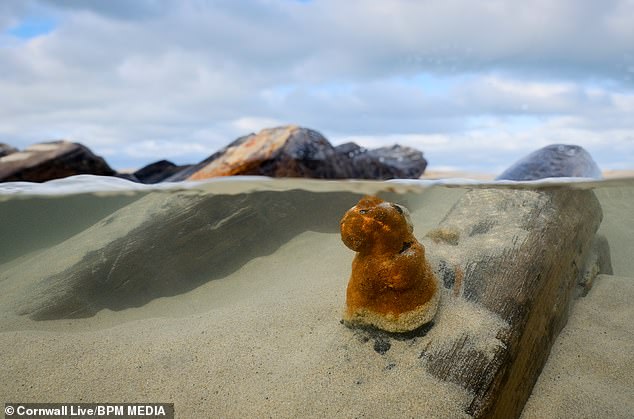 It’s thought the remains belong to either the The French brigantine Providence, which was wrecked during a storm in October 1865, or the German vessel SV Albert Wilhelm which ran aground after sailing from the Isle of Man in 1886

This time, luckily, all 12 of the crew were rescued from the Vulture.

Finally, a third iron steamship which had been sheltering from the storm, Bessie, was driven onto the beach next to the Vulture.

A short distance away, in St Ives, the cargo ship Rosedale was driven sideways onto Porthminster beach, where she later broke in two and was wrecked, although all 16 of her crew were rescued.

As the Bessie had come aground so close to the cliffs at Carbis Bay, the coastguard were able to rescue all eight of the crew by breeches buoy, pulling them one-by-one from the ship to the cliffs on ropes.

By far the biggest tragedy of the Cintra Gale in the area was the fate of the 1,593 tonne Hampshire the following day, which was abandoned off the coast of Gwithian after it started sinking.

However, despite almost making it to shore in their lifeboats, almost all of the crew were lost.

Only one of the 22-man crew survived, eventually washing up five miles down the coast at Gurnard’s Head.

Putin 'secretly moved to out of Moscow', anti-Kremlin media claim