These are the stunning black and white images that have scooped gongs at the prestigious Monochrome Photography Awards 2020.

More than 7,000 photographers from 91 different countries entered with the striking images separated into 13 categories for professional and amateur contestants.

Axel Brand from Stuttgart, Germany, won first prize in the awards’ fashion/beauty category for his picture of topless dancer Lexa-Lee.

The Monochrome Photographer of the Year Ksystof Mozyro won the award for his photos of the Black Lives Matter protests in London on June 6.

He said: ‘I found myself in the centre of the gathering, experiencing the whole range of human emotions and observing the uncommon behaviour.

‘Just around 11pm, after many hours of standing in furious the crowd, I was taken for the police investigation. The officer interviewed me and checked the ID.

‘Finally, I was able to leave but advised not to return to the city centre within 24 hours as this would result in being arrested.’ 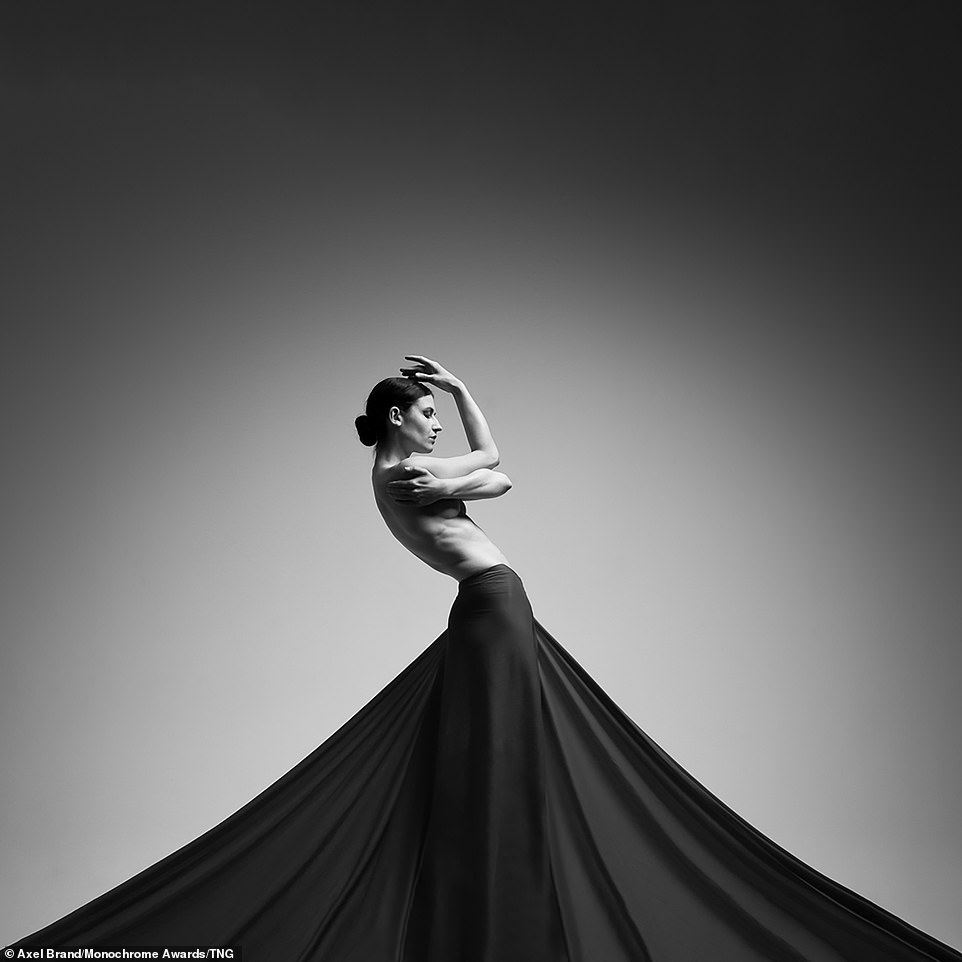 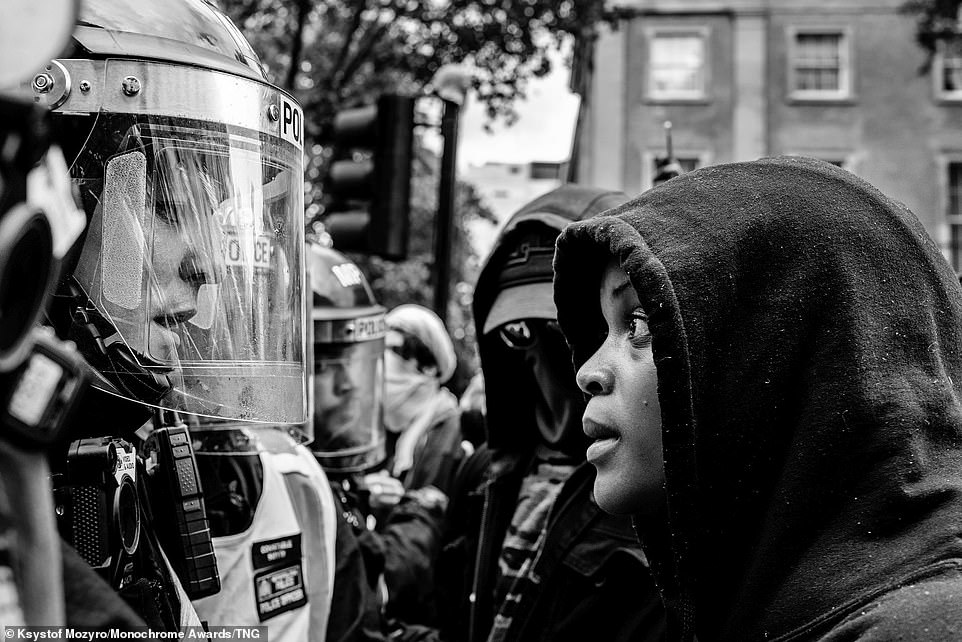 Black Lives Matter protesters face off with police in riot gear at the demonstrations in London on June 6. Monochrome Photographer of the Year Ksystof Mozyro said he was nearly arrested while taking the stunning pictures 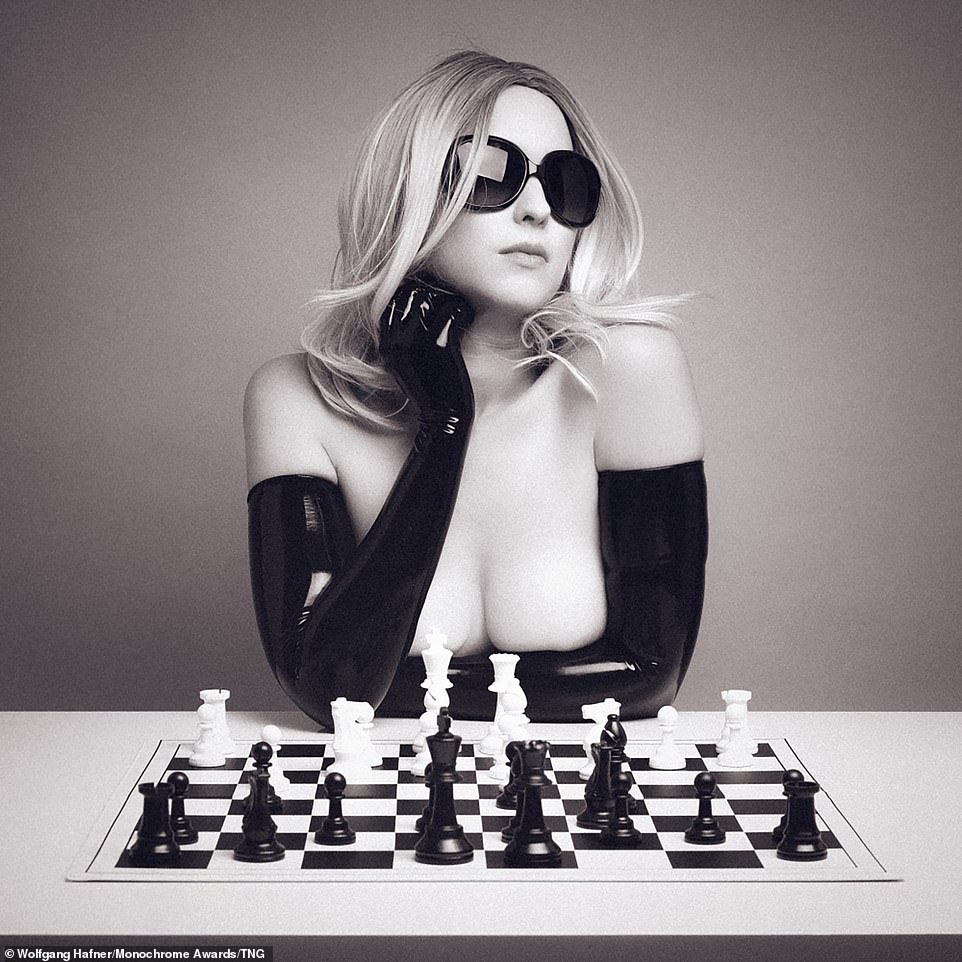 A topless model in latex glasses and large-rimmed sunglasses ponders her next move in front of a chess board. The picture titled Chess taken by Wolfgang Hafner from Vienna, Austria, won an honourable mention in the awards’ amateur portrait category 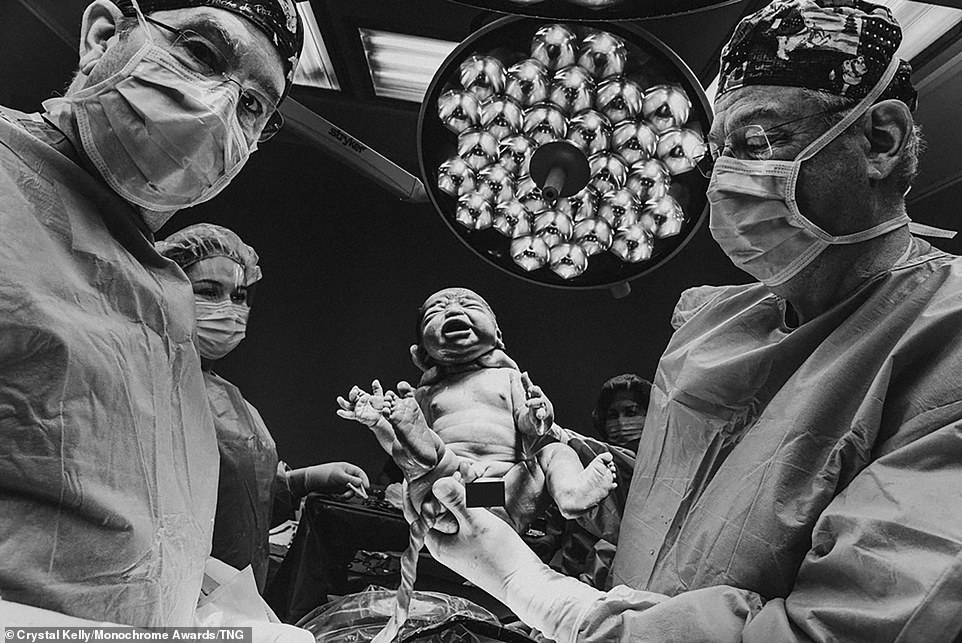 Crystal Kelly gave birth to her daughter via cesarean section on December 10, 2019, in the United States. She took this photograph, which won third place in the awards’ photojournalism category, and said: ‘I took this photograph as she took her first breaths still attached to me’ 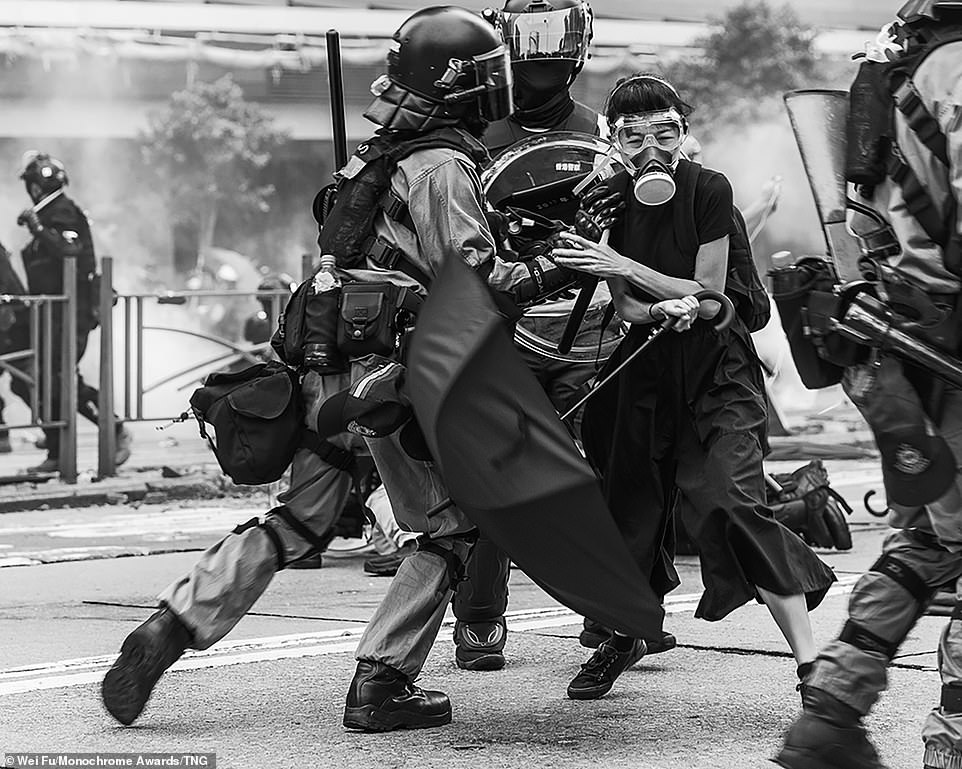 A protester wearing a gas mask and goggles and carrying an umbrella clashes with riot police in Hong Kong. Travel documentary and natural photographer Wei Fu from Canada won an honourable mention for this stunning picture in the awards’ amateur photojournalism category 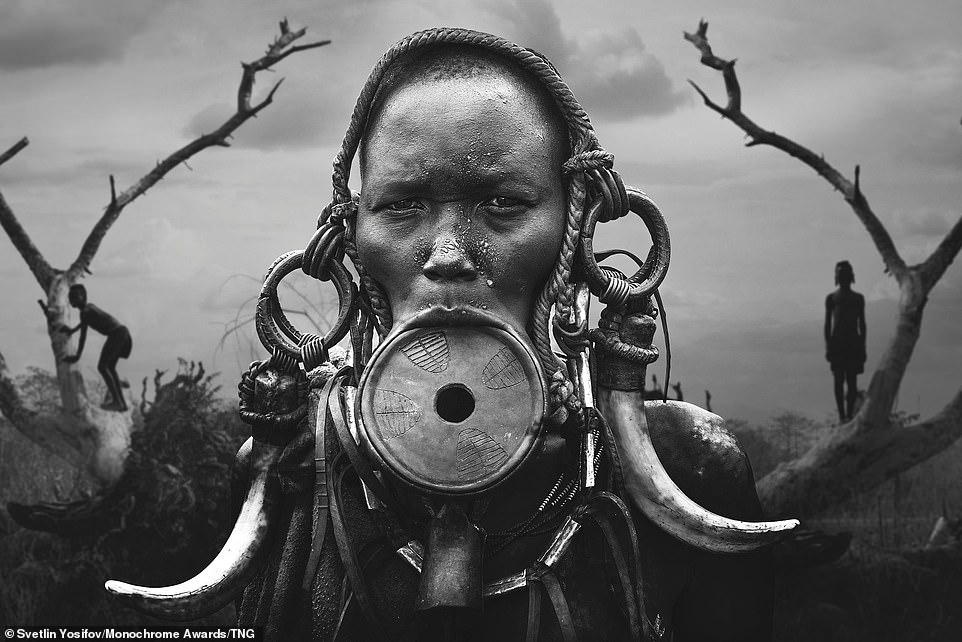 A woman from the Mursi tribe wearing a large lip plate poses for a picture in Ethiopia. The African tribe comes from the isolated Omo valley in Southern Ethiopia near the border with Sudan 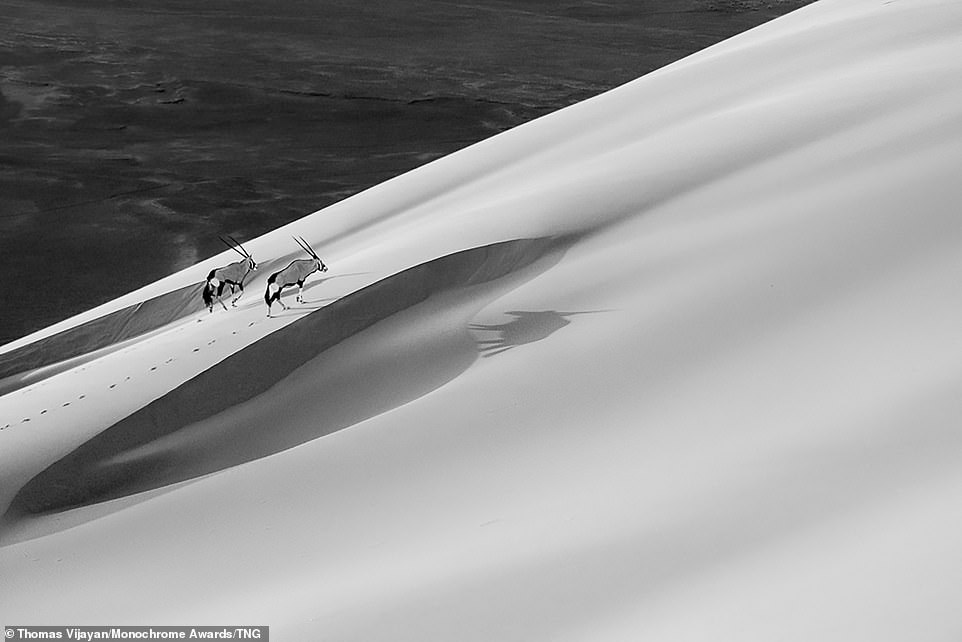 Two oryxes walk through the desert in Namibia. The Gemsbok or oryx is an iconic symbol of Namibia, appearing on the country’s coat of arms. Winner of the award’s professional wildlife category Thomas Vijayan said: ‘It is always amazing to photograph the animals in their natural habitat’ 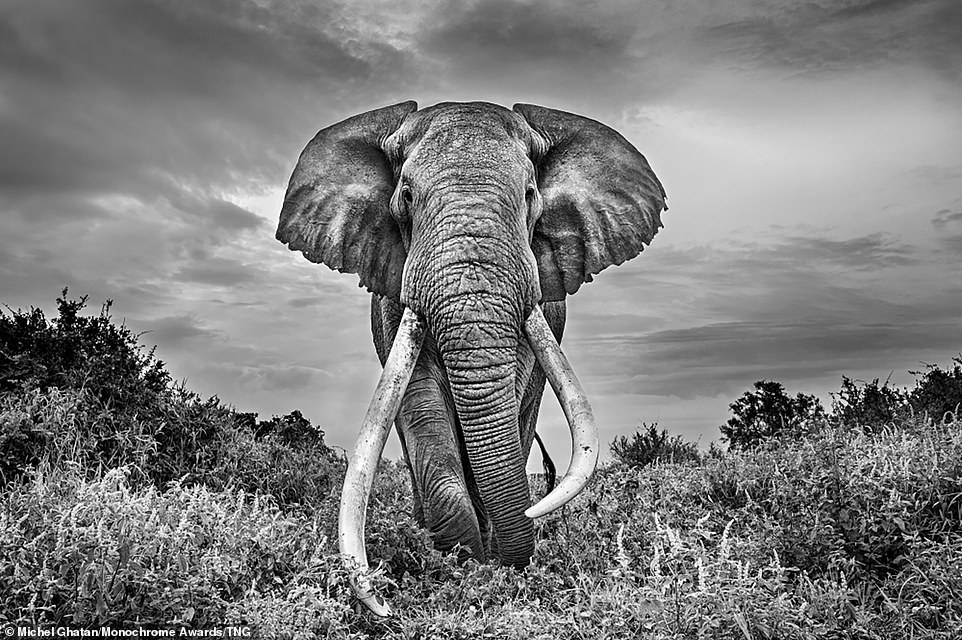 Tim the elephant walks through bushland in Tawi near Amboseli, Kenya, in January this year. British photographer Michel Ghatan spent three days with the elephant and said: ‘His beauty commands respect. To be this close is an overwhelming experience. His long tusks touch the ground and his ears are wide open; eyes gunning straight down at me’ 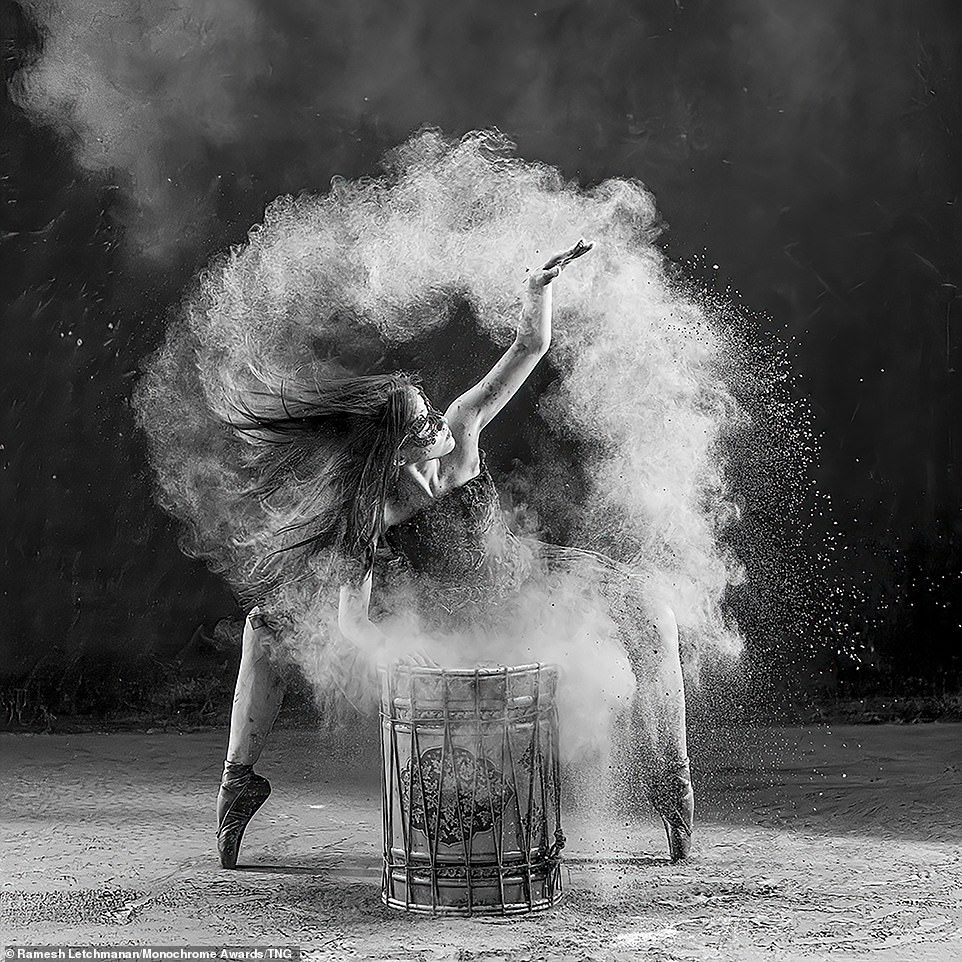 A female drummer is showered in colourful powder as she beats the instrument in Jakarta, Indonesia. Ramesh Letchmanan from Singapore won an honourable mention in the awards’ amateur conceptual category for his picture 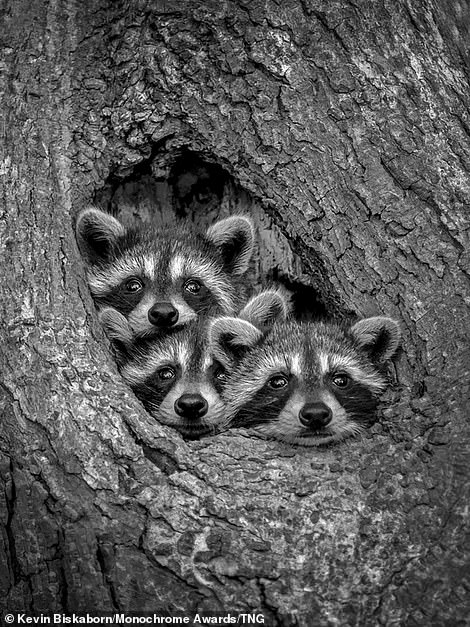 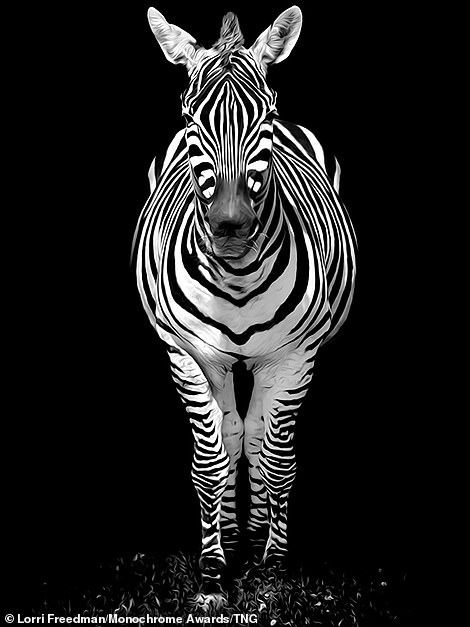 A family of raccoons peep out a tree hollow in Southwestern Ontario, Canada (left). Photographer Kevin Biskaborn said: ‘There were actually four raccoons in this small tree hollow – these three babies and their much larger mother (not visible in the photo as the babies were climbing all over her to get a better vantage point from the hole). Shortly after this shot was taken, one of the babies fell back down into the hole and another climbed on the head of the third baby.’ Right: Lorri Freedman’s picture Zebra, which won an honourable mention in the awards’ professional category 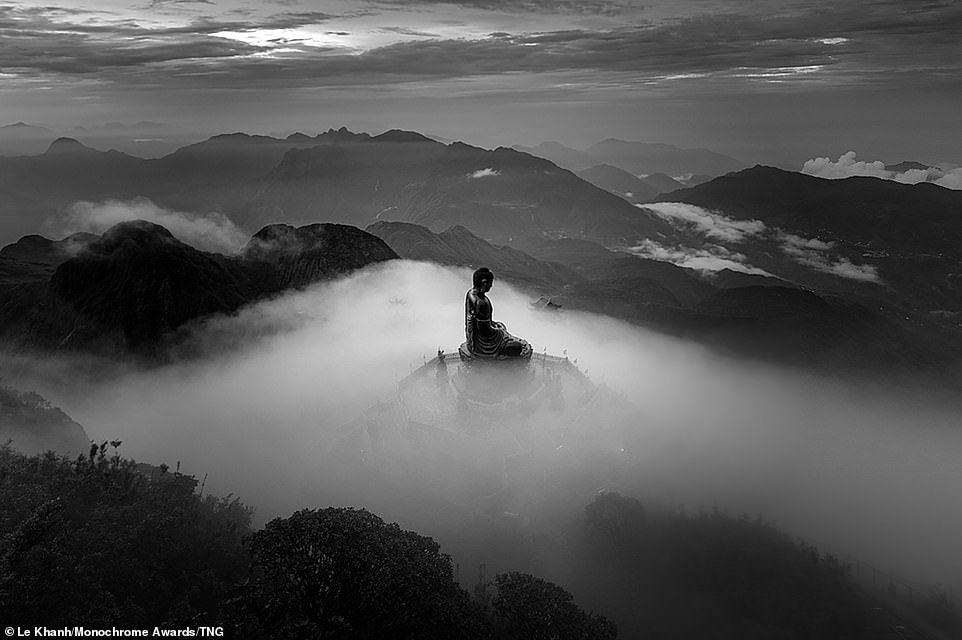 A bronze statue of Buddha is shrouded in mist at the top of Mount Fansipan, Vietnam, which is 10328ft (3143m) high. Fansipan mountain is called the roof of Indochina and in order to build this work all materials were piggybacked to the top of the mountain by walking up small trails. Photographer Lê Khánh said: ‘This photo is an extremely rare moment when clouds follow the wind over the top of the mountain, but just enough to see this structure’ 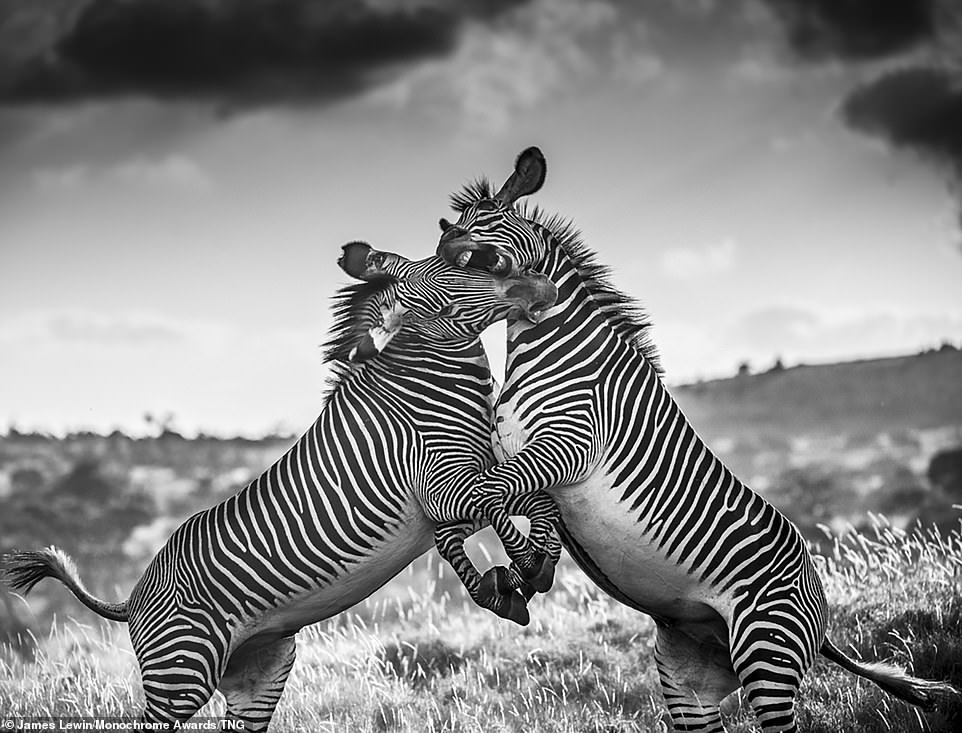 Two endangered Grevy’s zebras battle in Kenya. British photographer James Lewin said: ‘I was lucky enough to witness this epic duel but equally lucky that they reared up in such a dramatic way just 20 metres from me. It is as if the grass has turned into flames and the clouds into smoke. Nothing else would do for a duel at dusk’ 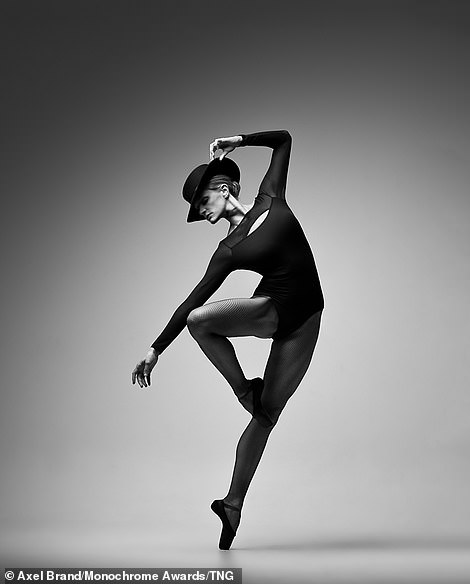 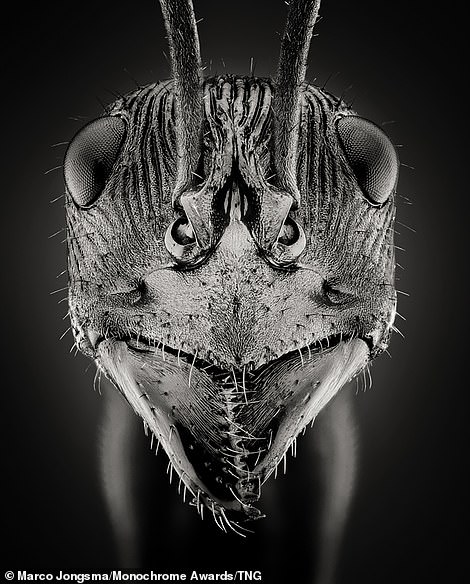 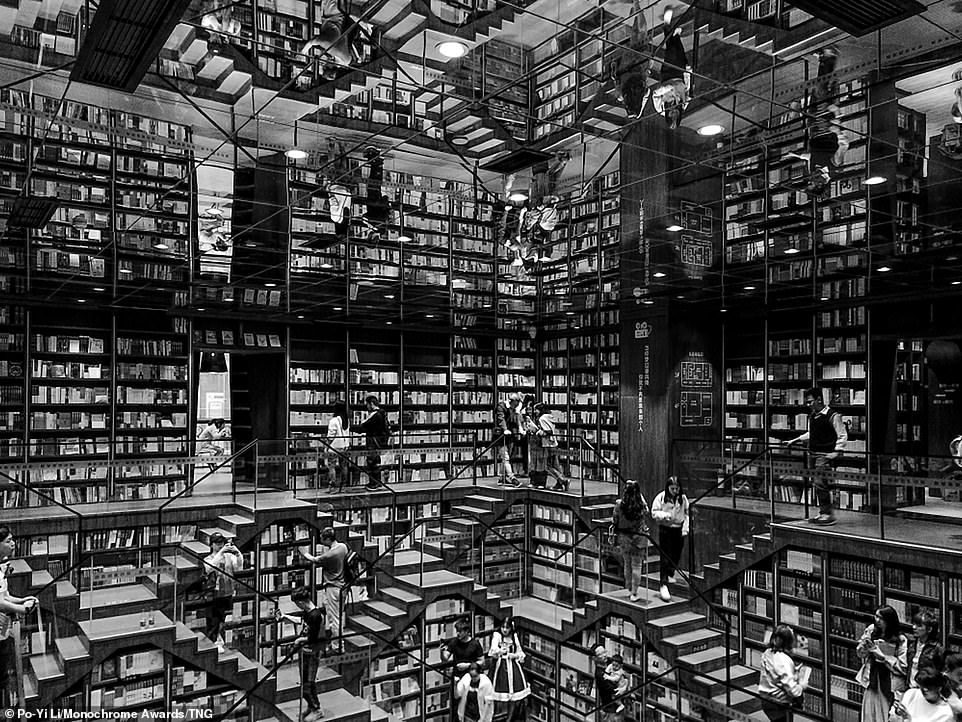 A mirror ceiling reflects the stairs at popular bookstore Zhong Shugs in Chongqing Taiwan. Po-Yi Li won first place in the awards’ architecture category for this picture and said: ‘The overlapping stairs resemble the rolling hills and the mountain city, one of Chongqing’s famous names’ 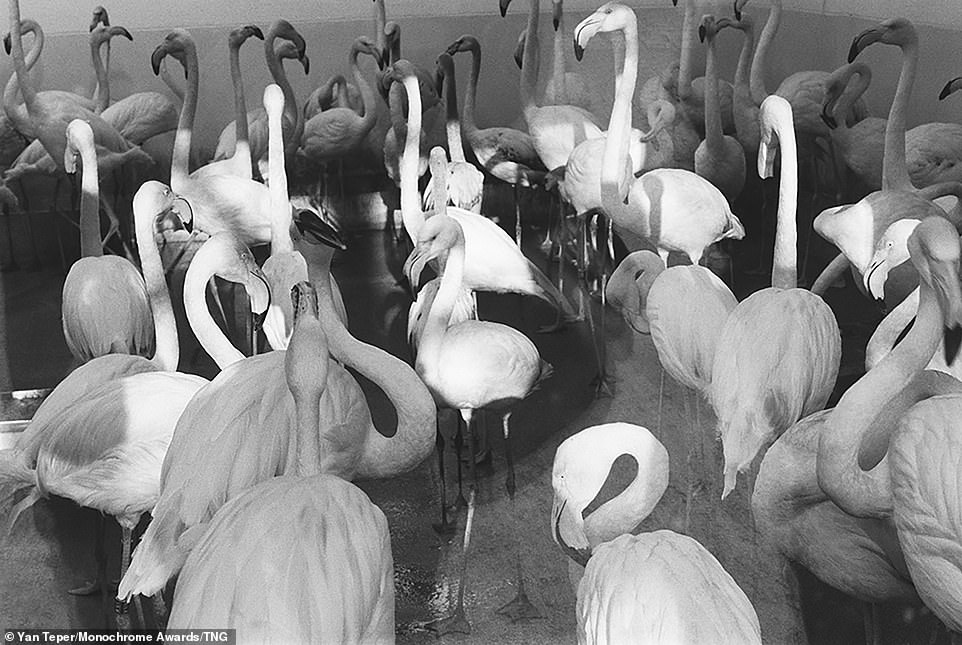 Flamingos stand huddle together for warmth in a room during a cold day at a zoo in Austria. Dutch photographer Yan Teper won an honourable mention in the awards’ professional nature category for his picture 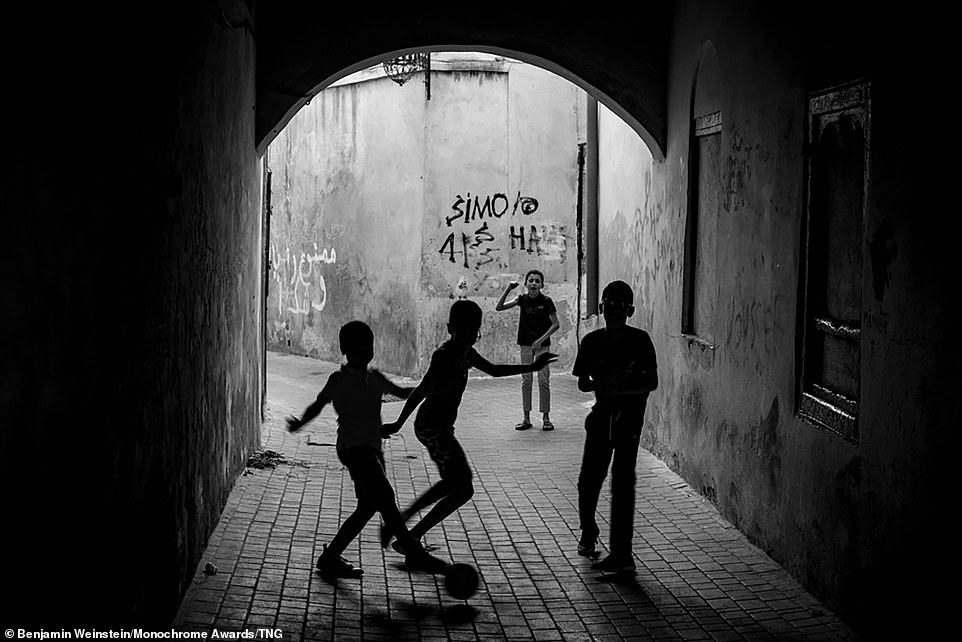 Children play football in a back alley of Fez, Morroco. American photographer Benjamin Weinstein won second place in the awards’ professional street category for his picture 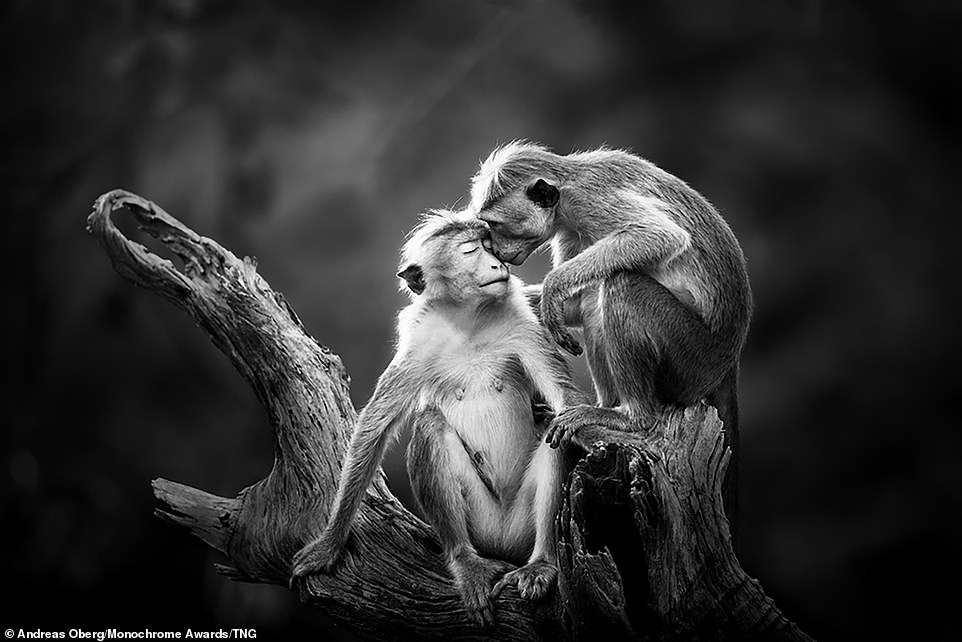 Two macaques embrace at the top of a tree in the thousand-year old ruins of Polonnaruwa, Sri Lanka. British photographer Andreas Oberg said: ‘After a few minutes looking for termites they sat next to each other in the last rays of the setting sun, leaning in and sharing a tender moment of mutual affection’ 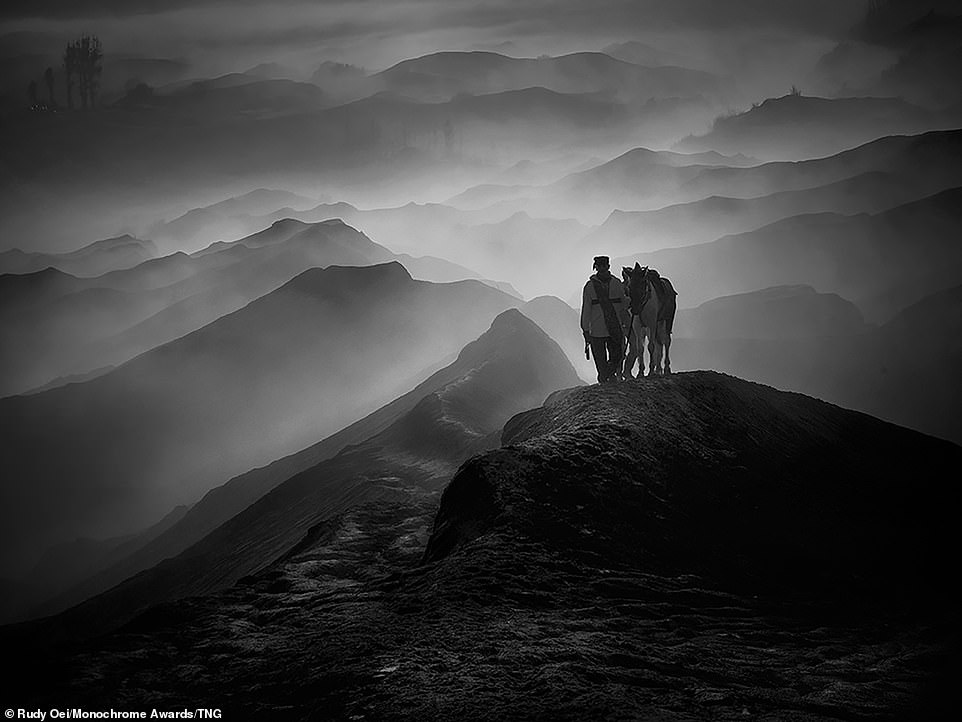 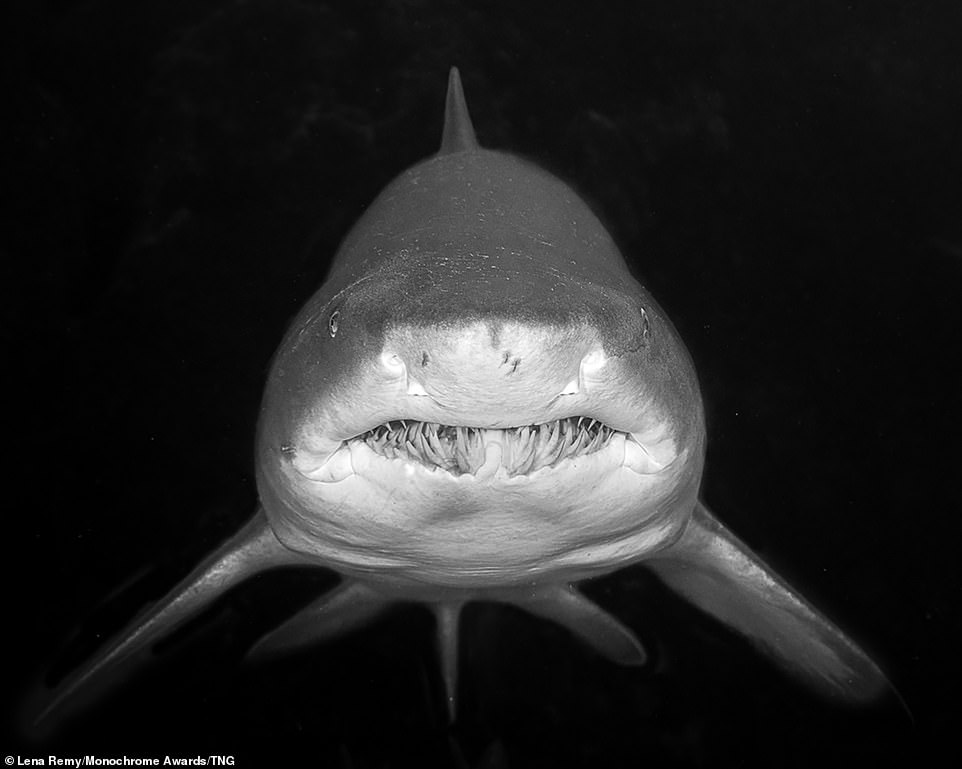 A fearsome grey nurse shark faces up to the camera while hunting at night off the east coast of Australia. Photographer Lena Remy took two days of diving to achieve the photograph, which won an honourable mention in the awards’ amateur wildlife category 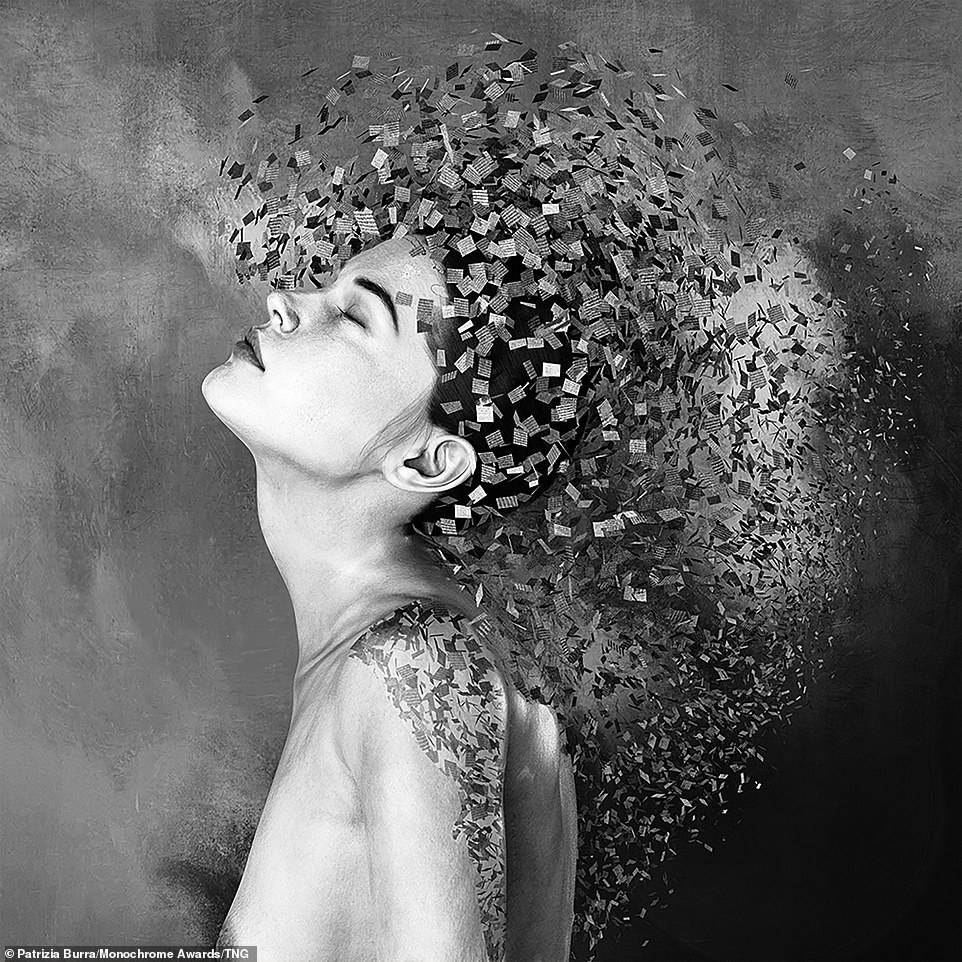 A foggy street in Carlisle is lit up by lampposts at night. Photographer Matthew Turner said: ‘While exploring the streets of my home city on this foggy November morning, I noticed this scene which caught my eye with the striking contrasts and detail of the stonework. The passing commuter added further interest and drama with a ghost-like silhouette in the distance’ 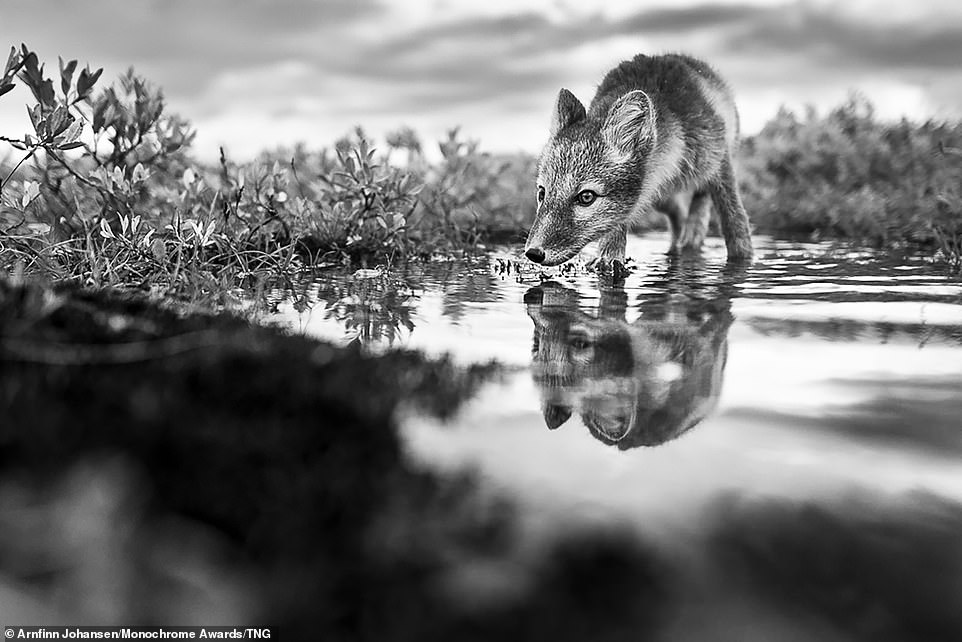 An arctic fox stoops down in a puddle while hunting in Dovrefjell, Norway. Economist Arnfinn Johansen from Lillehammer, Norway, won an honourable mention in the awards’ professional wildlife category 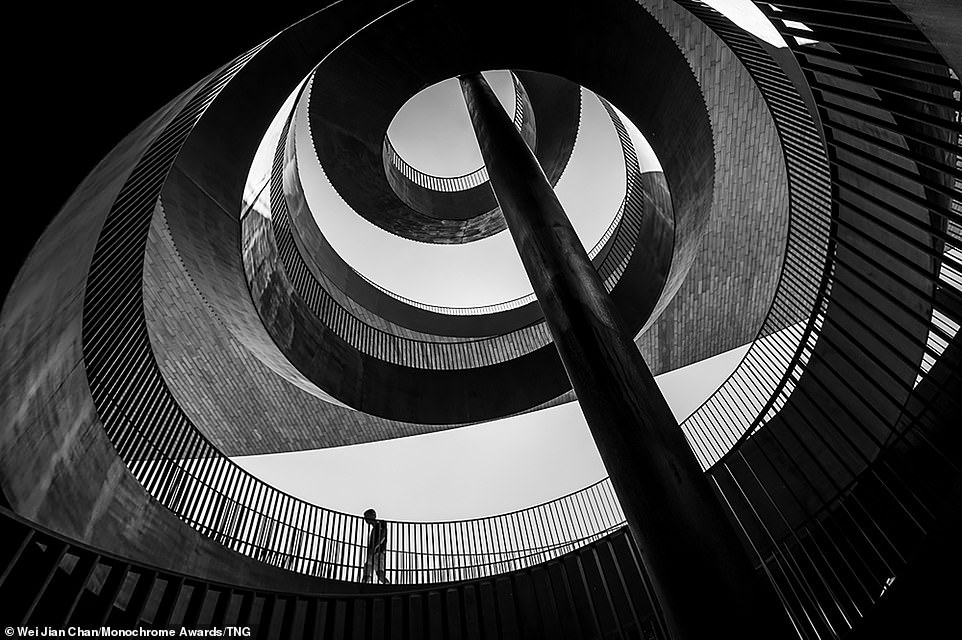 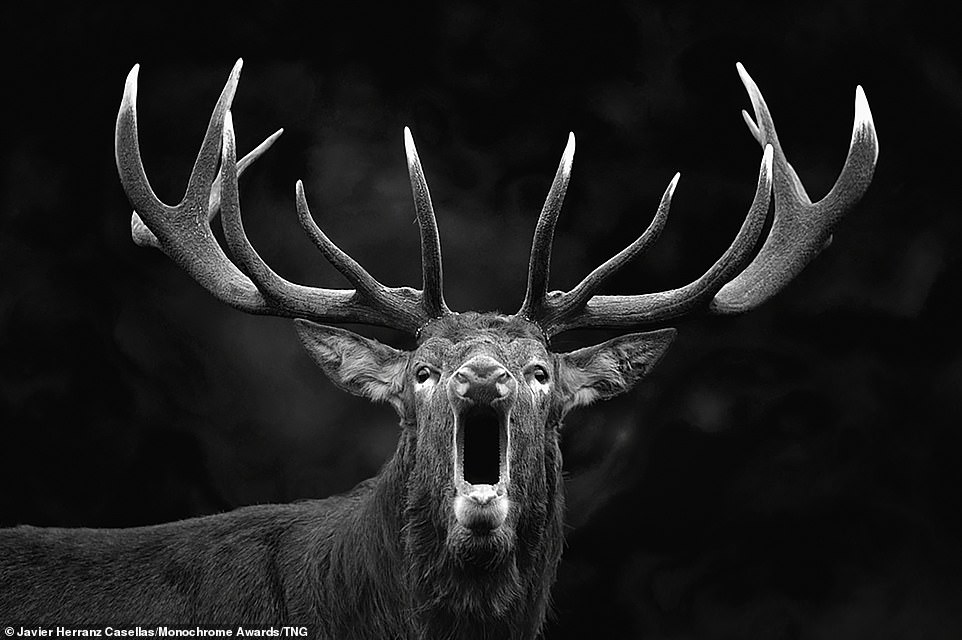 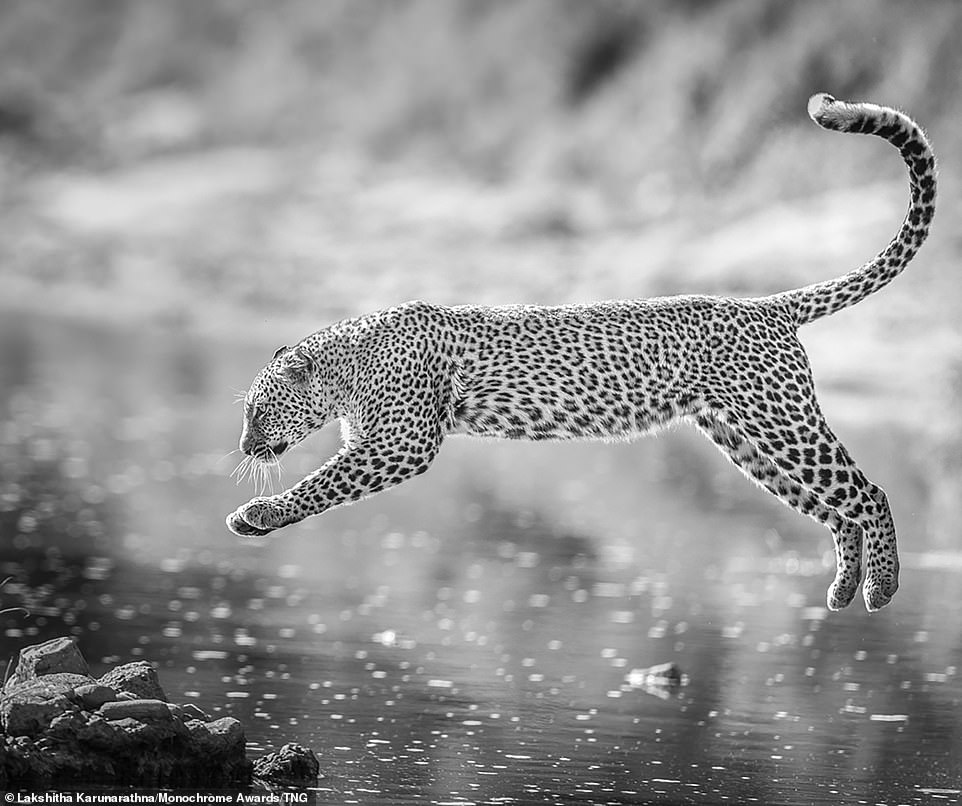 An African Leopardess of Maasai Mara national park in Kenya making a long jump from one side of the Mara river to the other side in an attempt to reach her newborn cubs, whom she left hours ago to get the food she hid under a tree on the previous night 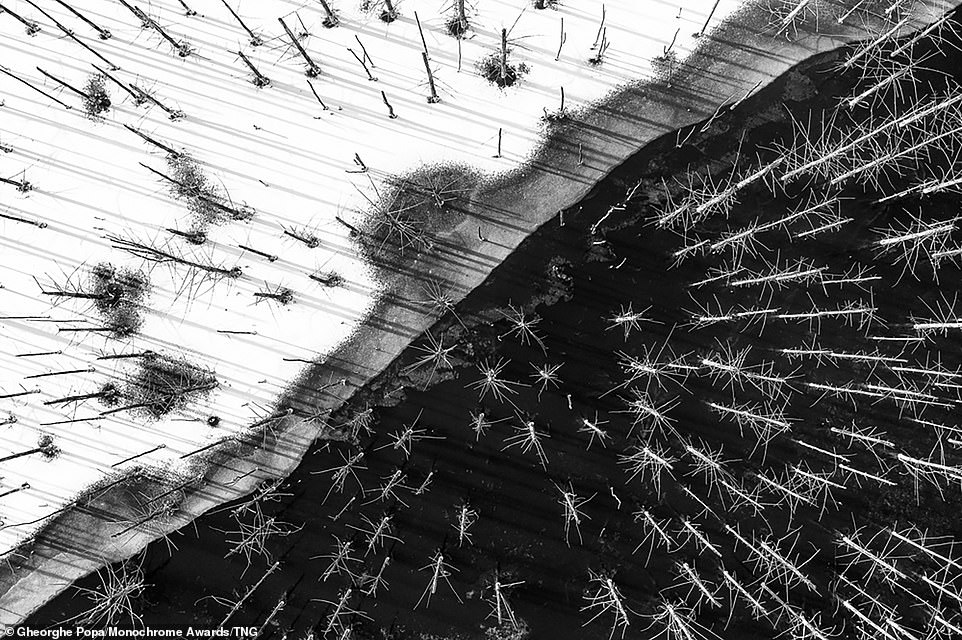 An aerial view of Cuejdel Lake in Romania just before the complete frost. Cuejdel is the biggest natural dam from Romania. Gheorghe Popa won first place in the awards’ professional abstract category 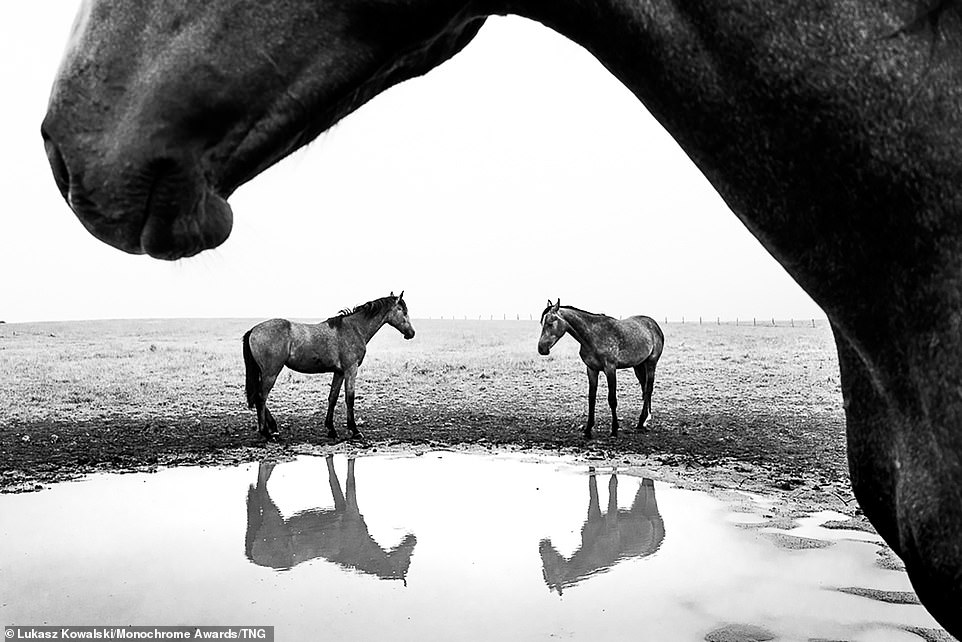 Three horses stand by a puddle in the freezing northwest fields of Poland. Łukasz Kowalski won first place in the awards’ professional nature category for his picture 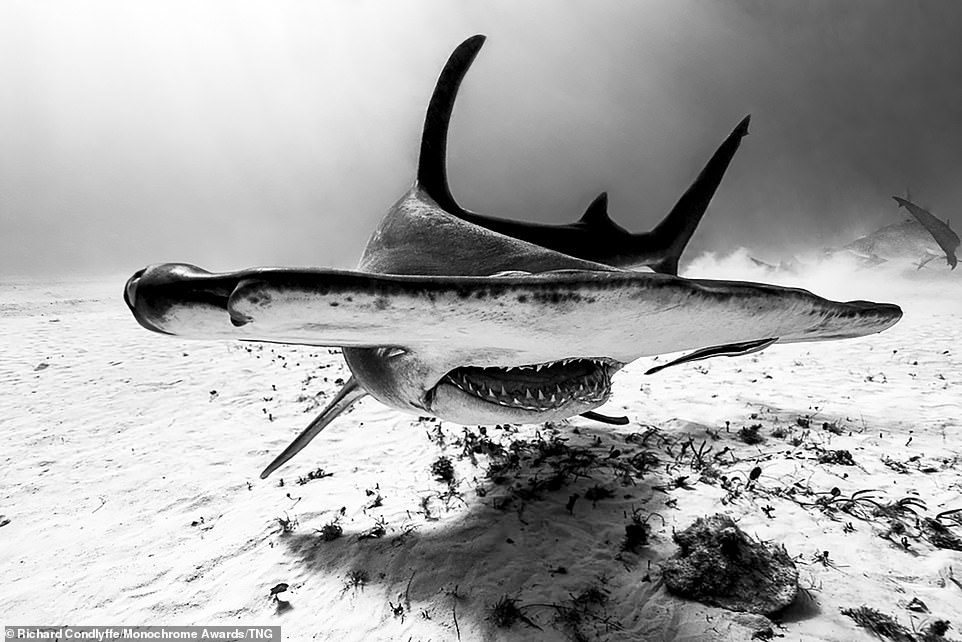