‘Mission complete’: Sully the service dog will accompany George H.W. Bush one last time when his casket is flown on the presidential plane to Washington

George H.W. Bush’s service dog Sully will accompany his casket aboard the presidential plane to Washington.

The Boeing 747 jet will carry the 41st president of the United States’ body from Texas to Washington, where he will lie in state in the rotunda of the US Capitol.

His son George – the 43rd president of the United States – and other loved ones are expected to travel on the plane as well as his service dog Sully.

Family spokesman Jim McGrath posted a touching photo of the yellow Labrador near Bush’s casket on Sunday with the phrase ‘Mission Complete.’ 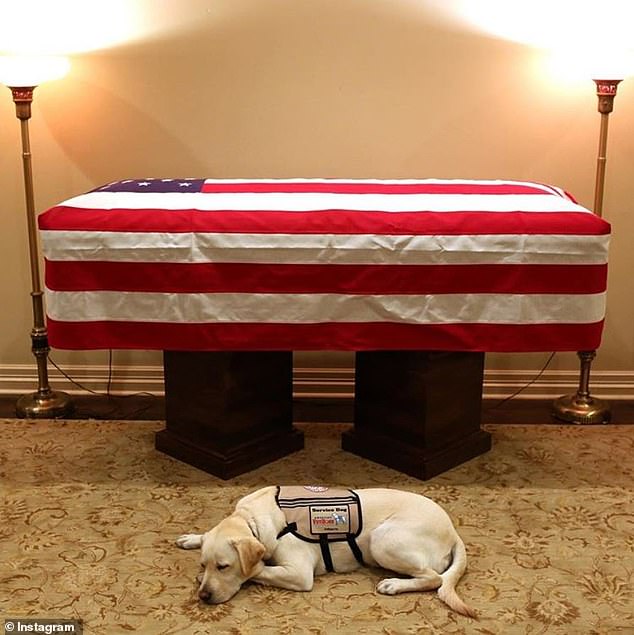 George H.W. Bush’s service dog Sully (pictured with his casket on Sunday) will accompany his casket aboard the presidential plane to Washington

The president had a form of Parkinson’s disease, and Sully could open doors, pick up items and summon help.

Bush died Friday at age 94, at his home in Houston – ‘a very gentle and peaceful passing,’ his lifelong friend and advisor James Baker said Sunday on ABC’s ‘This Week.’

Only the second president to see his son follow him to the Oval Office, he will be honored with four days of services and tributes in Washington and in Texas, where he will be buried on Thursday.

The high point of the commemorations will come Wednesday with a state funeral at Washington National Cathedral – the first presidential funeral since Gerald Ford died in 2006. 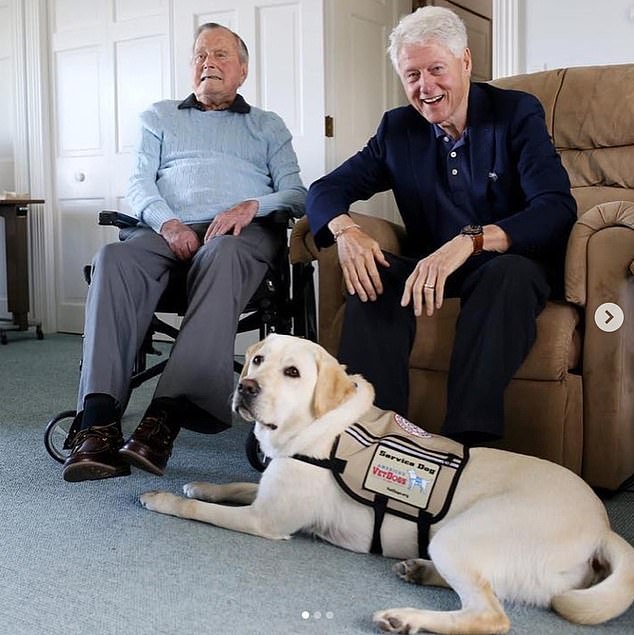 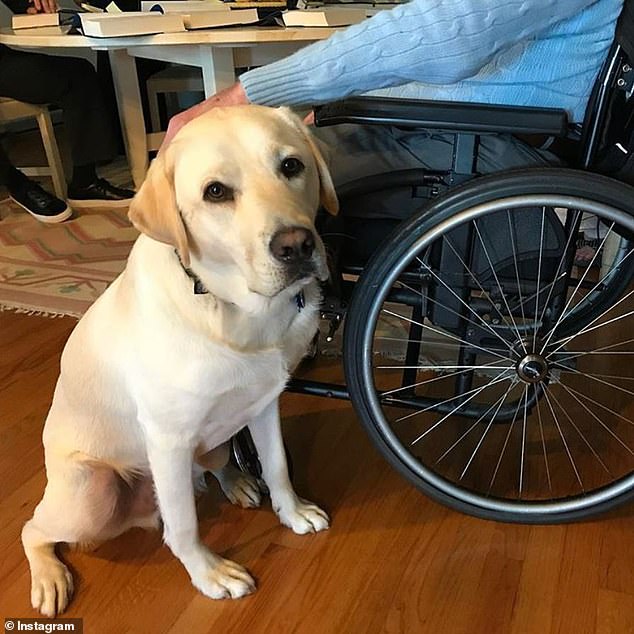 The president had a form of Parkinson’s disease, and Sully could open doors, pick up items and summon help

America’s farewell to Bush will begin with his remains being flown aboard the presidential Boeing 747 – made available at President Donald Trump’s direction – from Houston to Joint Base Andrews, Maryland, on Monday.

By tradition, the plane is only known as Air Force One when the sitting president is on board.

McGrath said the flights to carry Bush are being dubbed ‘Special Air Mission 41.’

‘A beautiful day In Texas – ‘ceiling and visibility unlimited,’ Mr. President,’ he wrote – using a phrase that Bush held dear from his time in the Navy, and one used by his family and friends to discreetly spread the news of his death.

After a speech from Vice President Mike Pence, Bush will lie in state in the US Capitol from Monday evening until Wednesday morning, under the watchful gaze of an around-the-clock honor guard.

Thousands are expected to pay their respects.

The casket will then be transported to the cathedral for Wednesday’s funeral service – the fourth held there for a former president. 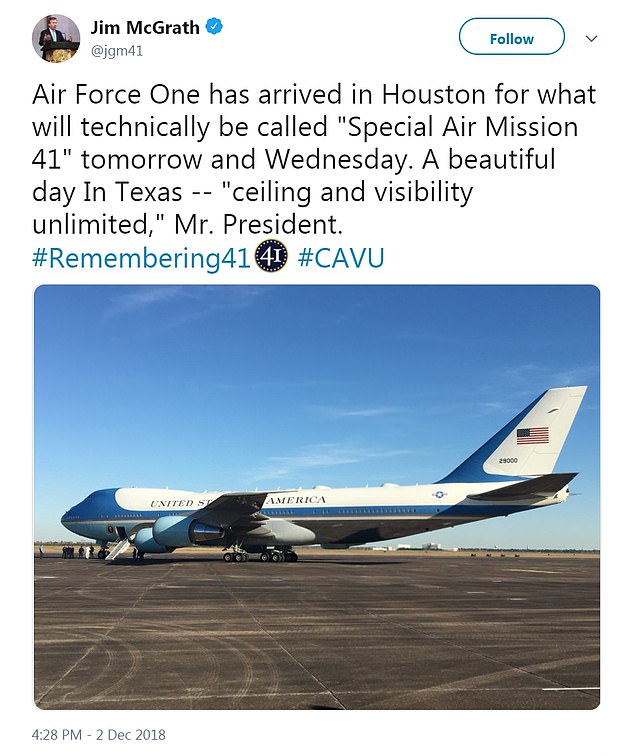 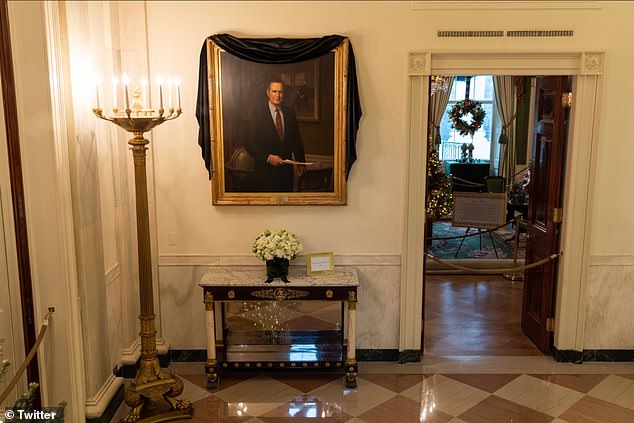 A portrait of President George H.W. Bush is draped with black cloth at the White House 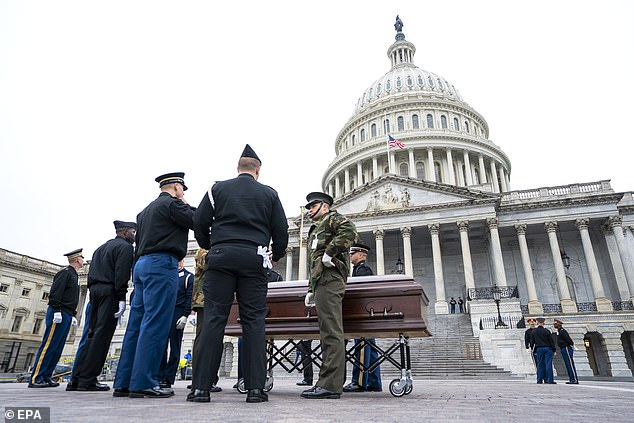 Joint service members rehearse the arrival of former President George H.W. Bush to the US Capitol, a day before he will lie in state in the Capitol Rotunda in Washington

Dozens of foreign leaders and US luminaries are expected.

Trump – who has often clashed with the Bush family – has declared Wednesday a national day of mourning, and said he will attend the funeral.

The casket will then be flown back to Houston, where the former head of state will lie in repose at St Martin’s Episcopal Church – where the Bushes worshipped for decades – until Thursday’s funeral service.

The remains will then be transported by train for interment at the George Bush Presidential Library in College Station, Texas.

Bush will be buried next to his wife Barbara, who died in April, and their daughter Robin, who died of leukemia at age three.

He was a decorated World War II fighter pilot, former head of the Central Intelligence Agency, and vice president to Ronald Reagan before winning the White House. 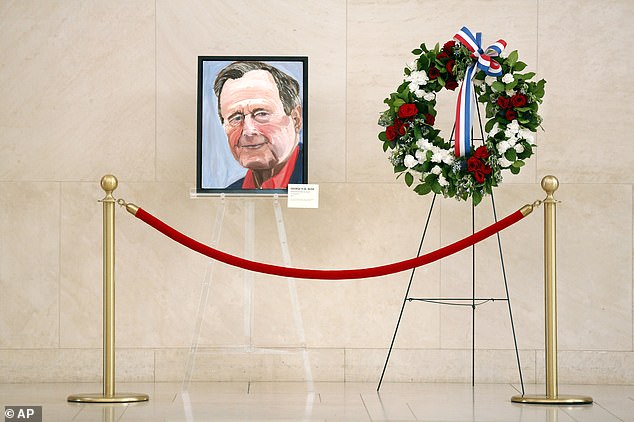 A painted portrait of the late George H.W. Bush – painted by his son George W. Bush – and a memorial wreath grace the atrium area of the George W. Bush Presidential Library in Texas

Baker, who served Bush as secretary of state, joined others in paying warm tribute on Sunday television talk shows.

Baker called him ‘far and away the best one-term president we have ever had,’ alluding to Bush’s single biggest political failure – his loss in the 1992 election to Bill Clinton.

Colin Powell, who was chairman of the Joint Chiefs of Staff during that war, said he was confident in Bush’s leadership because ‘he knew what combat was all about. He knew it meant the death of people… He wanted to avoid a war.’

The former president had struggled for years with Parkinson’s disease, which left him wheelchair-bound and often hospitalized – including after Barbara’s death.

When an aide told Bush that Baker was visiting Friday, ‘he perked up. He opened his eyes. He looked at me, he says, ‘Hey, Bake. Where we going?”

Bush replied: ‘Good, that’s where I want to go.’

Baker said Bush’s last words, in a phone conversation with son George, were: ‘I love you, too.’

BTEC students will begin receiving their revised marks from today

Iowa gym teacher arrested on suspicion of being drunk at work, police say

John Bercow ambushed in Waterstones bookshop and called a 'bully'