Supermarkets have been forced to cancel online food deliveries after heavy snow and ice brought travel chaos to areas of Britain amid concerns temperatures could plunge to -10C overnight.

Drivers were urged to stay off the roads with treacherous conditions predicted by the AA if thawing snow turns to ice overnight, with Britons in some areas also expected to face freezing fog patches, which will be slow to clear.

More than six inches of snow could fall before New Year’s Day, with the severe conditions affecting online shopping deliveries raising fears vulnerable and self-isolating families could be left without supplies.

Shoppers who vented their frustration online reported having orders cancelled only to find slots for redelivery were not available for several weeks.

In Congleton, Cheshire, one Tesco customer told how she received a text saying her delivery was cancelled due to ‘severe weather conditions’ at the very moment one of the supermarket’s vans drove past her house. 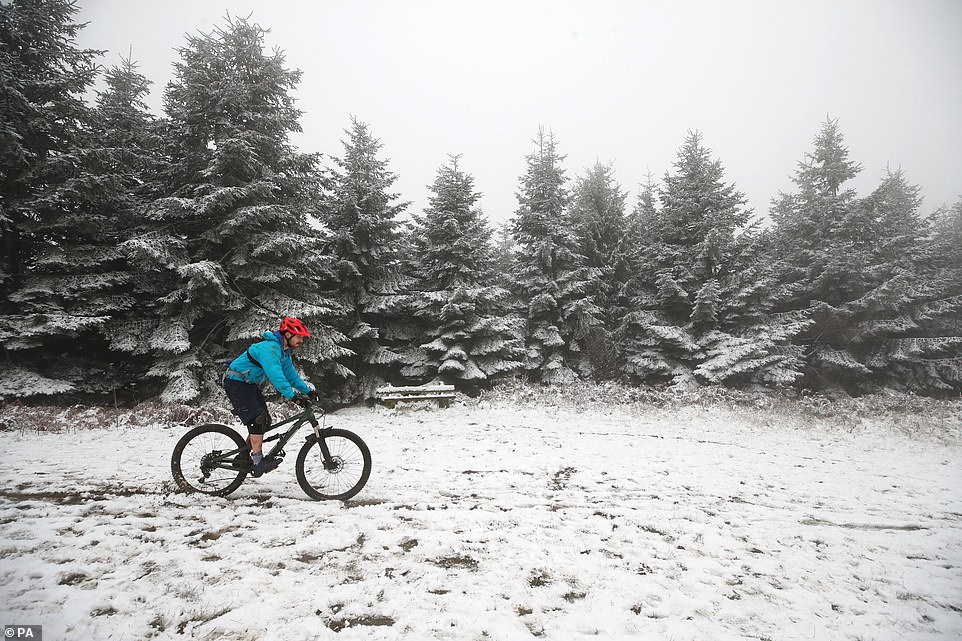 Alice Harrison, 37, said she has since struggled to find another delivery slot for her shielding parents. I thought it was quite premature, it was due at 2pm, and the roads were just slushy when I got the text, they’re completely melted now.’

One Sainsbury’s customer wrote on social media that he and his wife, who are in their 70s and are unable to drive due to health reasons, had their delivery cancelled due to a ‘light scattering of snow’.

Age UK expressed concern about elderly people being cut off by the severe weather and urged the public to check on any vulnerable neighbours.

Caroline Abrahams, Age UK’s charity director, said: ‘We tend to take easy access to food and other essentials for granted, but this Christmas a number of factors are getting in the way.

‘Bad weather, the pandemic and disruption to supply lines from Europe are creating a perfect storm, whereby even the most organised among us can find we’re unexpectedly cut off from things we need.’

Tesco said less than 1 per cent of Monday’s orders were affected. A spokesman added: ‘Our colleagues are working hard to deliver more online orders than ever before.

‘However, difficult weather conditions in some parts of the country mean that we’ve had to cancel a very small number of deliveries today. We are sorry for the inconvenience this has caused and would like to apologise to any customers affected.’

The cold snap will continue to spread across Britain on Tuesday and temperatures could plunge as low as -10C in parts of the country.

The Met Office has issued a yellow warning of snow and ice for much of England and Wales and parts of Scotland after a day of heavy snowfall in some regions, with more wintry weather expected tomorrow and on Thursday.

It said that overnight temperatures into today ‘will tumble towards freezing, perhaps getting as low as -10C in western Scotland where there is a covering of snow’.

Wintry showers could see up to 4in (10cm) of snow fall over the Pennines and North York Moors, according to the weather warning which runs until 10am today.

The Met Office said that most places will see little or no snow, but ‘a slight covering of a centimetre or so is possible in a few places’. 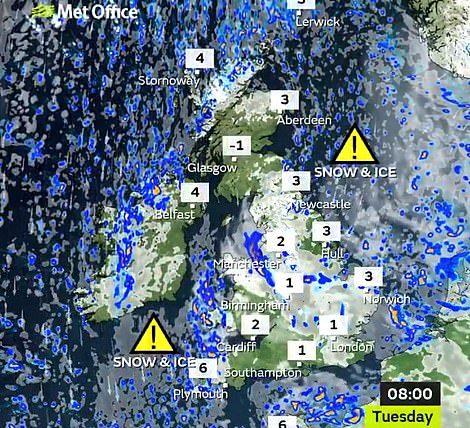 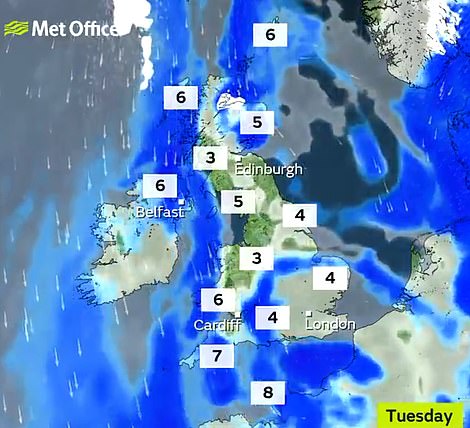 Ben Sheridan, of the AA, said: ‘Thawing snow, rainfalls and freezing temperatures overnight lead to challenging driving conditions, with roads likely to be icy in the morning.’

But the AA added regional restrictions, which have been imposed due to Covid-19, mean that roads are quieter than normal.

Large swathes of London, the Midlands, the South, South West plus the east of England and Wales have also been warned that snow and ice could hit tomorrow and on Thursday.

The Met Office yellow warning suggests that up to 2in (5cm) of snow could fall across parts of southern Wales, central and southern England, and there is a small chance of 4in (10cm) to 6in (15cm) settling in a few places, most likely on high ground above 650ft (200m).

It comes after much of England and Wales endured a cold and frosty Bank Holiday Monday.

Large parts of the country woke up to a fairytale sight yesterday after an icy blast brought snow showers.

But despite the pretty snow scenes, the freezing temperatures brought chaos to roads and railways – with forecasters warning of another dumping.

Heavy snowfall prompted Gloucestershire Police to advise the public not to go out unless it was essential.

There was a similar warning in much of the Midlands following a number of crashes, with incidents closing stretches of the M5, M6 and M54 yesterday. Temperatures plunged as low as -6.4C (20.5F) in some areas.

Yet in a magical escape from the pandemic, children and families wrapped up and headed outside to sledge down hills, build snowmen and enjoy snowball fights. And it did not stop swimmers taking a dip in freezing lakes around the country.

The yellow alert covers the East of England, London and the South East, the North West, South West, Midlands and Wales.

The icy conditions led to difficult conditions for motorists with many forced to abandon their cars.

In Staffordshire drivers faced with long delays with some stranded for three hours when traffic came to a standstill on Basford Bank. The council said its gritters had been out overnight but the snow was heavier than forecast, with 3in (7.5cm) falling in some places.

In Liverpool, a driver had a lucky escape after their car flipped over on an icy stretch of the M57 at lunchtime yesterday, causing delays.

Photographs showed the red Fiat 500 lying on its side with its windscreen shattered having ploughed into crash barriers at the side of the carriageway near Prescot. Police said the driver suffered only minor injuries.

Delays were also reported on rail services through Stoke-on-Trent from both Manchester Piccadilly and Birmingham New Street while a landslip caused by torrential rain blocked rail lines and disrupted train passenger services between Reading, Wokingham, Aldershot and Guildford.

There were also delays on Southeastern trains towards London between Maidstone East and West Malling because of ice causing power supply problems.

Meanwhile the bad weather has continued to hit power supplies with 273 homes blacked out near Penzance and 300 at Launceston in Cornwall, and another 300 families shivered with no heating or lights near Worcester.

The weather also led to the closure of Dudley Zoo while a football match between Kidderminster Harriers and AFC Telford United was called off.

Traffic Scotland reported an accident which blocked the north-bound carriageway of the A74(M) during a white-out between Johnstonebridge and Lockerbie, Dumfriesshire.

But it wasn’t all doom and gloom. Swan Pool park in Stourbridge was busy with sledgers all day yesterday while skiers in Scotland enjoyed the slopes at the Lecht ski centre which was open to locals living in Moray and Aberdeenshire.

Elsewhere, hardy swimmers braved freezing conditions to take a dip in Derwent Water at Keswick in the Lake District.

Gales meant that for the first time more than half of Britain’s electricity was generated by wind power on Saturday.

According to energy firm Drax, 50.67 per cent of the country’s power was produced by wind turbines on Boxing Day.