New York: Trade negotiations between the US and China have petered out without a deal as President Donald Trump said he would rather prolong the trade war between the two superpowers than settle for a weak agreement.

Trump instead spruiked the benefits of his tariffs to the US economy, a boast at odds with the verdict of almost all economic experts who say the imposts have led to overall price increases for consumers and cost jobs. 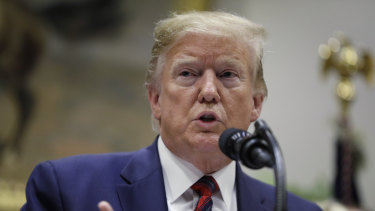 US President Donald Trump said there was “no rush” to strike a trade deal with China. Credit:AP

In a stream of tweets on Friday morning Trump said: "Talks with China continue in a very congenial manner – there is absolutely no need to rush – as Tariffs are NOW being paid to the United States by China of 25% on 250 Billion Dollars worth of goods & products. These massive payments go directly to the Treasury of the U.S."

The tariffs are, in fact, not paid by China but by US importers of Chinese goods. These companies have largely passed on the cost to American consumers.

"Tariffs will bring in FAR MORE wealth to our Country than even a phenomenal deal of the traditional kind," Trump continued. "Tariffs will make our Country MUCH STRONGER, not weaker. Just sit back and watch!

"In the meantime, China should not renegotiate deals with the U.S. at the last minute.

Trump, who previously described himself as "tariff man", said his administration was preparing to implement a 25 per cent tariff on all remaining goods imported to the US.

This would have a far more dramatic impact on US consumers than the previous tariff rounds.

"That would affect products people buy regularly, what I call the Walmart and Target stuff," Mary Lovely, an international trade expert at Syracuse University, said.

"Smartphones, clothing, shoes, sporting goods, toys. Consumers will notice the higher prices and retailers will not be shy in explaining why they have gone up."

US stock markets were on track to record their worst trading week of the year following the resumption of economic hostilities between the US and China.