Three teenagers who allegedly beat a 16-year-old boy to death after weeks of bullying appeared in court in Finland today in a case which has shocked the country.

The young victim was ‘sadistically’ assaulted for up to four hours before he died on December 4 in a park in northern Helsinki, by the trio who also filmed the attack, police said.

The defendants denied murdering the boy, who died of brain injuries and a punctured lung caused by broken ribs, prosecutors said.

‘This was no game, but pure violence,’ prosecutor Satu Pomoell told the court. 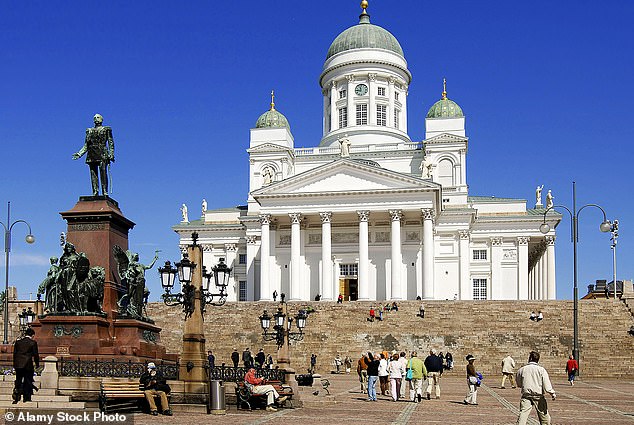 Three teenagers who allegedly beat a 16-year-old boy to death after weeks of bullying appeared in court in Finland today in a case which has shocked the country. In this file photo, visitors are pictured walking in front of the Helsinki Cathedral in Finland

The attackers, aged 15 and 16 at the time, face charges of murder as well as robbery and eight counts of assault in the weeks leading up to the boy’s death, court documents seen by AFP show.

A fourth boy is also charged with robbery.

An investigation by public broadcaster Yle, based on interviews with the victim’s parents and teachers at the school, alleged that staff at the care home where he lived refused to search for him when he failed to return.

His body was only discovered the following Monday, police said.

The victim was subjected to a prolonged period of bullying by the three teenagers, including three separate violent assaults before his death, reported Yle.

Two of the defendants are suspected of involvement in all three assaults, while the other suspect is believed to have been involved in two.

Police also suspect that the three accused planned and arranged the robbery of the victim in August last year. The fourth teen is not a suspect of any other crimes.

In addition, two of the suspects in the case have accused the third defendant of assaulting them.

Many details relating to the murder have not been released by judges at the Helsinki district court due to the age of the defendants and victim, but the murder has shocked the country.

Police have said they are investigating whether to bring charges against any school or child protection staff.

Official statistics show that almost half of all 14 to 16 year-olds in care in Finland have experienced bullying and the threat of violence.

The case is due to continue until March 3 with a judgement expected later in the year.

YouTube streamer Roaring Kitty to testify on GameStop on Congress