Now that we've crossed the threshold into the new year and vowed never to speak of 2020 again, it's time to look forward to the one positive thing I'm sure that 2021 will bring: no longer needing to give a toss about US politics.

For four years, we've followed the ups-and-downs of the Trump presidency (or, more appropriately, the downs-and-downs) with the level of intensity I imagine wealthy people follow the sharemarket. 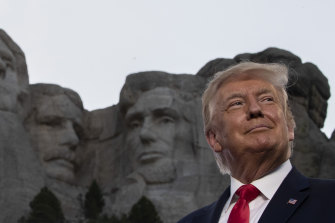 President who? Now Trump is gone, we can all relax about the minutiae of US politics. Phew.Credit:AP

We've been painfully aware of every questionable cabinet appointment, every eyebrow-raising dismissal of a US public servant, every dodgy pardon, every absurd press conference and rally … And let's not even get started on the tweets. Even Trump's typos made the news. I have no doubt that when the inevitable Donald J. Trump Presidential Library is built (if you can imagine such a thing), you'll be able to order a Mochaccino from the Covfefe Shop.

Even the most casual Australian observer of US politics can probably rattle off the names of three of Trump's press secretaries. But who was Barack Obama's press secretary? Chad Filibuster? Couldn't tell you. In any normal presidency, none of us would know Kellyanne Conway's name, let alone her husband's. Huckabee Sanders, Tillerson, Pompeo, DeVos … these are names I only ever want to hear at trivia nights from now on. And even then, I hope I can't remember them.

The reality-show President ran a reality-show presidency, but instead of characters like "Hotdogs" and "The Honey Badger", we got "Mad Dog" and "The Mooch". A presidency that made you uncomfortably nostalgic for parts of the George W. Bush years, and even the post-Aaron Sorkin years of The West Wing.

And it's not just the administration we knew too much about. God knows we've heard enough about the make-up of America's Supreme Court. Which brain surgeon can help me remove my awareness of Brett Kavanaugh's high school calendar from 1982? Meanwhile, back home, can you name a High Court justice? Rake? Is he one of them? I'll never know…

So although the Biden presidency will have its share of scandals and outrage, it looks like we won't be enduring another four years of "alternative facts", and we should hopefully be able to look forward to having the mental space to think about the things that matter to us. Like whether or not Alec Baldwin's wife has been pretending to be Spanish.

I'm not really a New Year's resolutions kinda guy (obviously I completed working on myself years ago and have no room for improvement) but maybe someone you know needs help with theirs, so I humbly offer these suggestions.

1. Go to the gym, but never lift anything that makes you release a sound when you lift it. If you need to make noise to lift something, it's too heavy. You're never going to need to lift something that heavy outside of a gym context, so let it go. In an emergency, hysterical strength will hopefully kick in and you'll be able to lift that car. For now, though, cool it on the grunting.

2. I can't believe I have to say this one, but here goes. Flush the toilet. That's right: make it your resolution for 2021 … to flush the toilet. Entering a public toilet these days is like being a police officer called to a residence where someone hasn't left their home in several days. Cautiously swinging open the door, dreading the contents that lie within. If I ever enter politics, I'll be calling for a royal commission into the state of public toilets in this country.

3. Resolve to make 2021 the year that you match your garbage to the appropriate bin. Broken eggs in the plastics bin? Try again. A used ironing board in the paper and cardboard bin? Have another go. I believe in you. Make this resolution, and I'll resolve not to leave passive-aggressive notes on the wall of the bin room.

Hearing that Kerri-Anne Kennerley broke her collarbone during a performance of the musical Pippin and still managed to finish her song reminds me of my own experience of pushing on in spite of injury.

When I was eight or nine, I competed in my primary school's cross country running event and managed to qualify for the district competition. In between those two events, though, I fractured my arm which then had to be put into a cast and a sling.

The doctor said I should not compete in the district race. But I knew this was my one chance at glory, so I defied the doctor's orders, and ran anyway. Came dead last. What a pointless exercise that was.

If I ruled the world

Every retail or hospitality business would have a sign on the door that says "Push" or "Pull". If you run a business that doesn't have one, chances are I've never been in it. If you've got a door that gives no indication of whether it needs to be pushed or pulled, that means there's a 50 per cent chance I'm gonna make an ass of myself. I don't like those odds. I'm not comin' in. Sort it out.

Binman is crushed to death by his lorry in horrific accident

Grand Princess cruise passengers will be tested for coronavirus