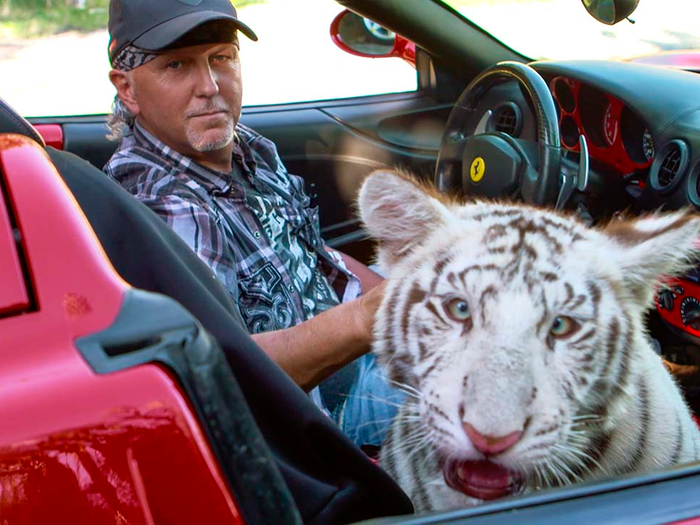 The Department of Justice filed a civil complaint against "Tiger King" star Jeffrey Lowe and Tiger King LLC, on Tuesday, alleging violations of the Endangered Species Act and the Animal Welfare Act.

The lawsuit accuses Lowe and his wife Lauren Lowe of "illegally taking, possessing, and transporting protected animals, and the Animal Welfare Act by exhibiting without a license and placing the health of animals in serious danger."

Jeffrey Lowe, the former business associate of Joseph Allen Maldonado-Passage (aka "Joe Exotic"), is the owner of the Greater Wynnewood Exotic Animal Park and Tiger King LLC. Lowe and Exotic were two of the stars of the Netflix series "Tiger King," which was one of Netflix's highest streamed shows of all time.

Lowe has faced his own share of legal battles around the alleged mistreatment of animals at the Greater Wynnewood Exotic Animal Park in Oklahoma. Today's DOJ complaint follows the USDA's suspension of Lowe's license to exhibit animals to the public, an official enforcement action announced on August 17.

The USDA alleged that Jeffrey Lowe and Lauren Lowe, his wife and business partner, violated the Animal Welfare Act. The suspension went into effect after USDA Animal Plant and Health Inspection Service toured the Wynnewood, Oklahoma, facility in June and July 2020 and said it "found numerous animals in poor health and living in substandard conditions."

After Lowe's Animal Welfare Act exhibitor license was suspended, Lowe called USDA's actions a "litany of falsehoods" in a Facebook post on August 18. The ruling meant that Lowe could no longer exhibit exotic animals to the public.

Lowe then voluntarily terminated his license in an attempt to move to a new facility called "Tiger King Park" in Thackerville, Oklahoma, in an attempt to subvert the USDA's ruling and move all activities online, according to the DOJ complaint. In October, Carole Baskin and Big Cat Rescue formally took over the Wynnewood property after a successful intellectual property lawsuit. Lowe had moved all the animals to his new facility in Thackerville, in an attempt to continue showing animals to the public through online ventures.

In the USDA's report after the June and July visits to Wynnewood, inspectors described a lion cub named Nala as "lethargic, depressed, thin and would not get up out of the mud after prompting." Pictures were also shared with the DOJ complaint that USDA inspectors claim showed photos of infections and untreated wounds on neglected animals.

The DOJ report alleged that Nala could not stand due to chronic bone fractures, and in September, Nala was transferred to a wildlife sanctuary in Colorado, with animal rights group PETA assisting in the effort.

In response to the DOJ's new lawsuit, PETA issued a statement, saying, "The dominos are continuing to fall with nearly every animal abuser featured in 'Tiger King' now in custody, out of business, or facing lawsuits or charges, including criminal charges. The DOJ's lawsuit is another sign that Lowe's animal-exploiting days are numbered and that the big cat cub-petting industry is finished, something that PETA has worked hard for."

On November 10, Lowe posted on the Wynnewood Zoo Facebook page asking followers to follow him and Lauren on Cameo, and on OnlyFans. Jeff Lowe also claims that they are filming season 2 of "Tiger King" and claimed it will be out in the spring. Netflix did not immediately respond to a request for comment.

Daniel Card, a lawyer for the Lowes, declined to comment until after reviewing the complaint.

The DOJ complaint also seeks a court order to "permit immediate inspection of the facility, to prevent the Lowes from exhibiting their animals in person or through online platforms, to prevent the Lowes from acquiring or disposing of any animals during the injunction, and for any and all veterinary records for any animals treated during the injunction."