ELEVEN hospitals in the South East are stretched to full capacity due to Covid patients flooding in.

Seven more hospitals in the Midlands are also at breaking point, having declared they are "fully stretched" with no more beds. 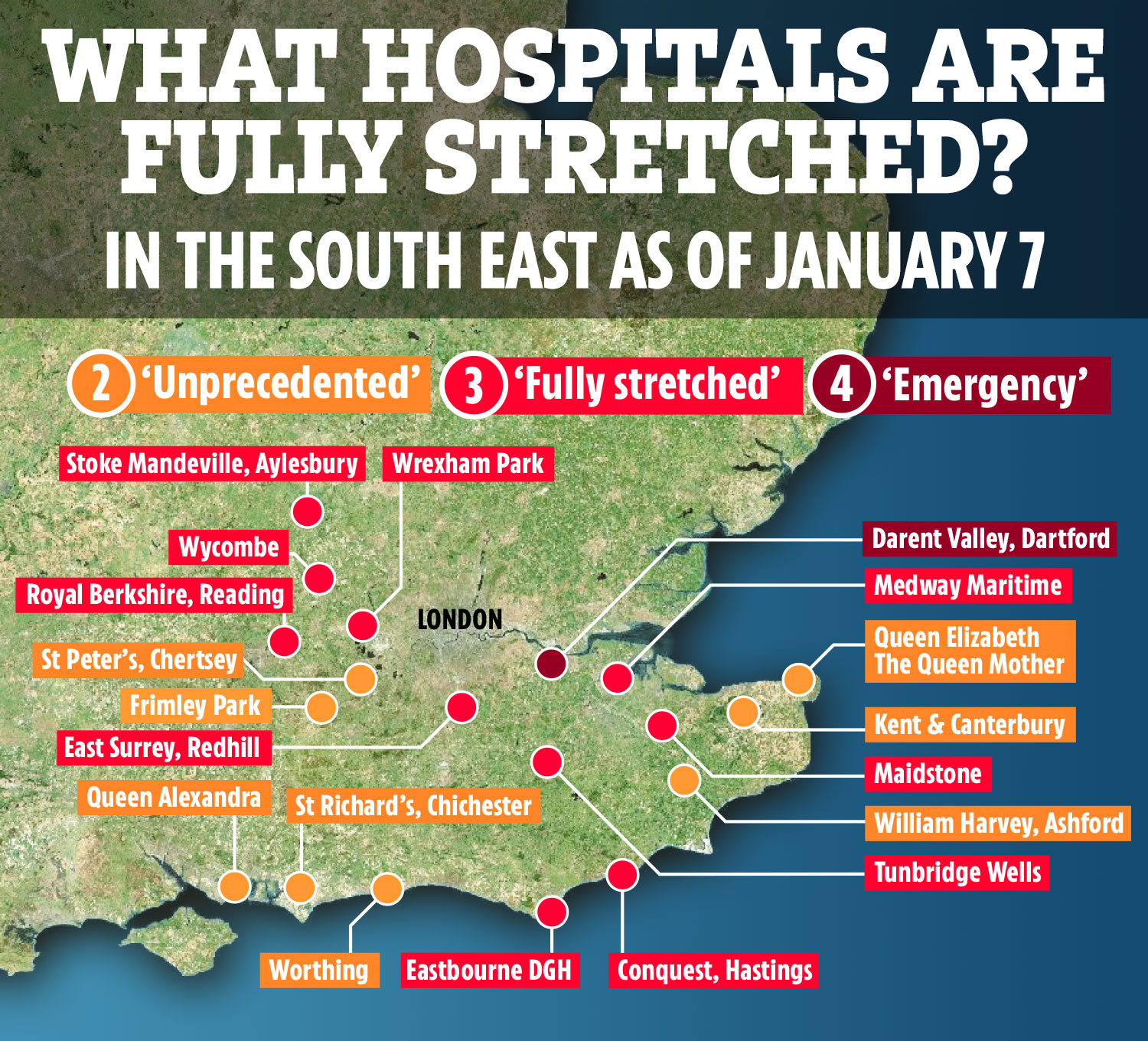 It comes as London mayor Sadiq Khan declared a serious incident as the capital's hospitals face running out of beds within weeks.

An NHS dashboard, seen by the Health Service Journal, reveals one hospital has declared an emergency, meaning resources are overwhelmed and care cannot be given to some patients.

Dartford and Gravesham Trust, which runs the hospital, told the HSJ later that day it had been an "administrative error".

However, it remains as level four on the NHS dashboard for critical care.

There are five levels of CRITCON during the pandemic, which are used for a hospital to state its situation.

The levels rank from CRITCON 0, in which the hospital is running "business as usual", to CRITCON 4, an "emergency" whereby there is a possibility of "non-clinical refusal or withdrawal of critical care due to resource limitation".

Ten hospitals, all in the South East, are running at CRITCON 3, meaning they are at "full stretch" and critical care patients are spilling onto other wards.

Wards which would normally be used for things such as child care are being turned into intensive care units for adults.

What are the CRITCON levels?

CRITCON 2, unprecedented: Usual critical care at full capacity and overflow into other areas. High levels of transfers and aid across the NHS trust.

CRITCON 4, emergency: Resources overwhelmed. Possible refusal of withdrawal of critical care due to lack of resources. This can only be implemented by NHSE.

According to data in the dashboard, Darent Valley Hospital was at 173 per cent of its baseline level of beds for critical care on Thursday morning.

However, other hospitals are higher than this, including East Surrey Hospital (229 per cent), Eastbourne (192 per cent), and Wexham Park Hospital (215 per cent).

The full list covering all regions of England has not been reported by the HSJ.

It comes as hospital chiefs in the South West have warned the region faces an "absolute crisis".

Adrian Harris, medical director at Royal Devon and Exeter Foundation Trust and Northern Devon Healthcare Trust, made the comments during a board meeting, adding: “We are preparing to be hit as hard as the East of England. If we are hit as hard, we will be hanging on by our fingernails and we are planning accordingly.”

'More patients than the first wave'

It comes as separate analysis of data reveals more than half of all major hospital trusts in England currently have more Covid-19 patients than at the peak of the first wave of the deadly virus.

Of 139 acute hospital trusts who reported figures for January 5, 84 – or 60 per cent – reported higher levels than in spring.

East England and South East England have more than three-quarters of trusts are above their first-wave peak, the shocking analysis from PA news agency shows.

Other trusts have seen their numbers rise so rapidly that they could pass their first-wave peak within days.

Which hospitals have more patients now than in the spring?

Some examples of hospitals that have more patients now than in the spring include:

– Barts in London, where there were 830 Covid-19 patients on January 5 compared with a first-wave peak of 606.

– Portsmouth Hospitals University, which had 457 patients compared with a first-wave peak of 244.

– University Hospitals of Derby and Burton, which had 426 patients versus a first-wave peak of 252.

– Hull University Teaching Hospitals, where the number stood at 208 on January 5 compared with a first-wave peak of 112.

Hospitals are treating more than 30,000 Covid victims -50 per cent more than at the darkest point of the spring outbreak, according to Sir Simon.

This figure is the equivalent of 20 acute hospitals, he said.

In London, 800 new Covid sufferers a day are being admitted to wards — enough to fill one of the major hospitals.

“That is of course all happening at what is traditionally the busiest time of year for hospitals and the wider NHS", Sir Simon said.

'A serious situation for the NHS'

An NHS chief said the situation is "very serious" for the NHS, and the worst he had seen in his career.

“The problem with looking at capacity data or occupancy data is it doesn’t tell a true picture – an empty bed is not necessarily an available bed because we do have to keep some beds empty for infection control reasons.

“The picture is that this is a very, very serious situation for the NHS, the worst I’ve seen in my career by a long stretch, and we need to be honest about that.”

He said there had been a lot of “very damaging” misinformation “peddled by some individuals on social media and elsewhere” which he described as “really disheartening”.

Sir Simon vented his anger during yesterday's Downing Street briefing at posts claiming that hospitals were empty, branding them “a lie”.